I have been using roon on my on my 2011 mini Mac. This has been working without issue when running using both upscaling to DSD128 and some minor EQ.

The other day I bought a nucleus with the view that I might get some more capability / better performance then I get with the mini Mac. However, I’ve been reading that the nucleus has some processor limitations when using DSP and upscaling. I am hoping that these reports are coming from people that are using the nucleus to stream simultaneously to multiple end points.

I’ve spent some time on the Internet researching this but seeking feedback from those using the nucleus in a similar way to what I’ve described above. I only ever stream to one end point at any one time and really hoping that this will work OK.

Oh thanks. Very helpful - I didn’t think to look at their website.

What are the real life experiences around this statement:

‘Certain combinations of functions using DSD source or destination formats, upsampling, or multichannel processing may not be possible’

First, you won’t notice any audible difference between ANY core. Second, Roon market the difference between a Nucleus and Nucleus+ as small vs large library (>10k albums) for small vs large homes (>6 simultaneous endpoints). DSP loading is difficult to quantify, as it depends on the task, but obviously if you want DSP for 6 concurrent endpoints, you’re asking the processor for a chunk of work. Other people (myself included) never use DSP, and rarely (if ever) run more than one concurrent endpoint, so requirements are lower. Finally, you’ll get better performance from a home built NUC8i7BEH with ROCK, if you’re up to doing this. A Nucleus(+) is intended as a turnkey plug-and-play solution for those adverse to a bit of DIY, who value official support. The community is here to help, which ever path you decide!

I was looking at a NUC but got a great deal on this second hand so happy to go down this path where normally I’d look to save $$ and kill time via DIY.

I only ever stream to one end point at any one time and really hoping that this will work OK.

A Nucleus will be fine for this usage requirement.

I have a ROCK server built on a NUC5i3 with 8GB and a 240GB SATA SSD, i.e. the lowest officially supported hardware configuration for ROCK and it runs flawlessly with a library of 86k tracks/6.5k albums, with a music library on a NAS, into 5 Zones/endpoints.
I also benchmarked it with EQ DSP, simultaneous upsampling & downsampling on all zones, where it performed the same as a NUC7i7.
The single thread performance of an Intel CPU has not altered much from Gen 5 to Gen 6 or Gen 7. The NUCs can’t avail of higher clock speeds due the physical cooling requirements (same with i5 & i7 CPUs that generate more heat & have to be throttled by the microcode).
Plus ROCK doesn’t need on-board WiFi or Bluetooth, nor improved GPU performance for dual head 4K displays.

Roon have turned off TurboBoost and modded CPU function just a tad to facilitate cooling and alleviate the ‘Chirping Nucleus’ issue.

I also benchmarked it with EQ DSP, simultaneous upsampling & downsampling on all zones, where it performed the same as a NUC7i7.

All in all, it would only be some real edge cases the Nucleus might not match up as well against, and those will be quite rare.

So got the nucleus and it’s working better than the Mac. The remote is smoother and the whole thing performs better & quicker - even with high levels of dsp and up scaling to high DSD rates.

The claims on the website make about limited processing power are misleading. I wonder how many people have either got the nucleus + or nothing at all because of the specs communicated by roon.

I don’t think the claims are misleading. A nucleus is enough for all but the largest of libraries, but human nature is to go for the biggest and best which in most cases is not necessary.

I do agree with your last point but the website did mislead me. I’ve got a decent size library (~75k), been upscaling to dsd128, adding eq, room eq filters and it hasn’t lagged or glitched at all.

How did it mislead you? From what I see, the Nucleus rather than the Nucleus+ is the logical choice? 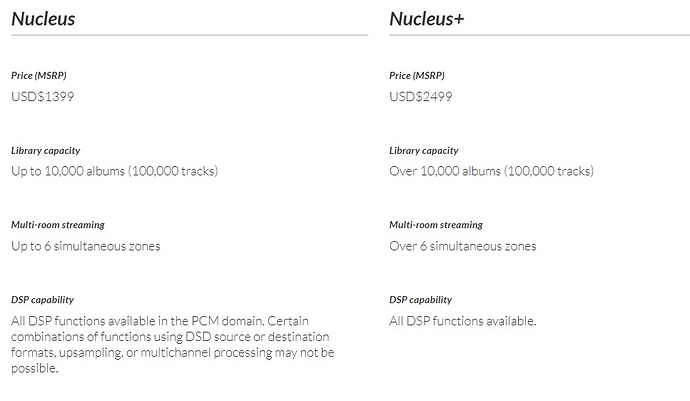 Look the bit saying combinations of dsp not being possible… which combinations? I’m pushing mine to the max and it’s working fine. Prior to getting it I was worried I would be limited but I’m not. Their statement nearly pushed me to the + model. Maybe that’s their strategy.

I think they should be clearer so people can make informed decisions. If it’s ‘certain dsp combinations while running multiple end points’ - that’s fine. Just needs to be said so people don’t get scared into spending more unnecessarily or go in a different direction and prevent roon from continuing the fine product they have. That’s my point.

The Nucleus is a great bit of kit.

I trialled Roon on an i3 Windows desktop a few years ago, and was underwhelmed. I liked the UI, but it was slow and ‘glitchy’.

However, I ‘bit the bullet’ just over a year ago and went for a Nucleus, and haven’t looked back.

Without the availability of the ‘turnkey’ Nucleus, I probably wouldn’t have come back to Roon. I’m SO glad I did!

Maybe it’s just me, but I like to peek at other people’s signal paths whenever a screendump is posted. Interesting to see how others are killing their bit-perfectness.

Anyway - here’s mine – care to share yours? [image] (Basic PCM upsampling (Precise, Minimum Phase), signal goes from Node 2 via SPDIF coax to MiniDSP (for Dirac DRC) to Meridian DSP speakers (also via SPDIF) – or directly to headphones). After extensive listening – back to basics.

I suspect that Roon Labs are simply erring on the side of caution. I would too.

Thanks!! That’s exactly what I was looking for.

It’s fun to experiment with what affects processor speed. Typically, the highest loads are using heavy DSP (convolution for roon correction) with concurrent upsampling to DSD.

I think this is as precise and as accurate as Roon can be. They can’t spell out in great specificity all combinations of DSP functions that might or might not work on a Nucleus vs Nucleus +. I think there is a return policy if you need to upgrade.

And that’s precisely my point…