Hello friends.
After update of my Nucleus Plus, appeared cliks at the beginning, at the end, and sometimes during playing in the left and the right channel. There was no such thing before.
Best regards
Yury 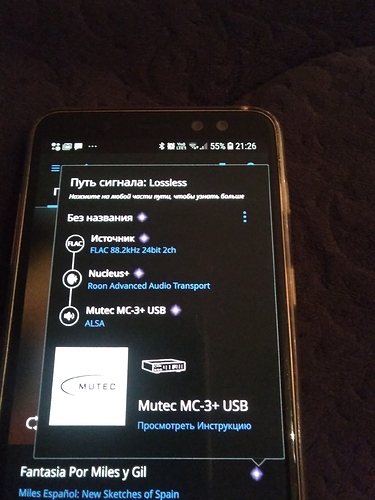 I imagine much more context is required to diagnose this. For example, what DAC or streamer are you using and how is it connected? Are you using wired or Wi-Fi for your network? Do you hear the clicks only when there are sampling rate changes?

Seems like that should work. Perhaps try using Roon’s DSP to resample everything to 96 kHz to see if this removes the clicks. That would rule out sampling rate changes as a cause.

Some Linux kernels have problems with audio drivers that can create these clicks. Next thing to try would be to connect your MUTEC to a different computer. For example, a laptop or desktop computer that’s running Roon Bridge. If the clicks go away, this may be a Linux audio driver issue.

If you don’t want to wait for the next kernel update, you could buy something like the SOtM sMS-200 or Sonore microRendu to feed the MUTEC. Unlike the Nucleus+, these devices are actually designed to function as Roon outputs, so you will get nicer sound in addition to eliminating the clicks.

Why need transmit the signal throught Ethernet then throught USB, if possible bypass additional devices such as a switch or router?

Why need transmit the signal throught Ethernet then throught USB

Hmmm…not sure of the best way to answer except to say that the rules for streaming digital audio are different than for analog. With analog, the shortest path is usually the best. With streaming, there’s no penalty for adding network connections between components, but there can be many benefits.

I use only one endpoint.

Hello @Yury_Kochetkov, do you hear the clicks when playing to system output of your remote?

I replaced the USB cable. The clicks were gone. Strange as it may seem, the problem was in USB cable.