Just curious if anyone has installed Roon Remote on a Nvidia Shield TV? I side-loaded the apk, but the app was unusable…

Any plan from a Roon perspective if they have any plans supporting this platform in the future?

Yes the NATV is a great little kit, would be better with a native Roon application…

I too would like to vote for a roon remote app on the NVIDIA Shield TV. I think it would be great for Roon because any work would directly translate to any other Android TV devices as well as the growing number of televisions shipping with Android TV built in.

I have attempted to sideload and use an app to force roon opening in landscape but even then you still need a mouse to use the application.

I would love to have a Roon Remote on my NVIDIA Shield and would seriously consider buying a lifetime membership if we had this.

I also would love to have a Roon Remote on nVidia Shield and consider buying a lifetime membership if we had this.at once.

I am so depressed that room remote won’t play on my nVidia Sheild TV. Such a bummer! Roon Labs… do you have any plans to make these two work together?

I would love to be able to use Roon with my Shield TV. It would make for one less component and I use my shield daily.

Is this a case of better support for larger screens, rather than specific android tv support?

If the roon app scaled better for larger screens it would be still usable.

If not… Roon Labs do you have some advice on how I can get my lifetime version working with my setup? The Roon application is worthless to me if I can’t get it working through my system. Or should I request refund from Roon and use Plex?

Hello @support, is there a way for me to get this to work? Could you get back to me please.

Hey @Bill_Ruggles – I just responded to your PM.

As I mentioned, we’re looking into this but generally speaking we have not done any internal testing of our Android app for use with Android TV devices, nor has work started on a full fledged “10 foot interface”, although of course it’s something we would like to do in the future.

There’s also some information from last year in this thread:

No plans right now… let’s get Linux Server out the door first.

I’d also like to voice my desire to have Roon Remote running on the Shield TV. This would definitely help sway me towards a lifetime membership.

I don’t think Roon understands just how powerful the processing power is in a NVidia Shield TV. This Box is made to play video games for goodness sake. Most Streaming box’s NUCs etc use quad core processors. The Shield TV has a 256 Core Processor and if you order the Shield TV PRO, it comes with a fast 500 GB storage… all for $300. It costs around $200 for a 500 GB alone on Amazon.

The remote is tiny! It has voice recognition. Can you Imagine… “Roon… Play Keb Mo…, Am I wrong”.

Actually, almost all NUCs are dual-core but with 2 threads per core.
Also, just comparing number of cores and/or threads is very much comparing apples to oranges,
unless the threads or cores have the same characteristics.

Furthermore, not many applications will run well in a mega-threaded/cored CPU architecture.
That was painfully obvious with form Sun Microsystems SPARC T-series.

The GPU has 256 cores. The CPU has only 8, not to be compared to 8 cores on a $600 Xeon CPU designed for servers. So, stating number of cores, alone, can be misleading. Can Roon utilize GPU cycles? Dunno.

Still, I agree with the general point. So much so that, before I discovered Roon, I made that point to JRiver. I didn’t get the courtesy of a reply; which makes me think they were already working on it.

Actually my use for the Shield TV would be to host & play Roon Remote. I have all of my music stored on a QNAP NAS.

Shield TV has Plex to play music and movies, but I do like the Roon capabilities for Music… I have sent a couple requests to Mike @ Roon for a refund of my new membership… but haven’t heard back. I would certainly retain the Roon membership if Roon Remote worked on my Shield TV.

Ok guys, so I have Roon Remote installed on my Nvidia Shield…Now you can do it two ways… First is to sideload it, and install a secondary launcher from the store in order to view it… One problem is that it will be vertical, then you will have to install an app that puts it in landscape mode. It will work afterwards, but the MAIN issue is that it will look really upscaled and album art will look god awful… Well there is a BETTER method, but it requires a bit of… Work…

Install FULL Android Nougat on your Nvidia Shield. You will not lose any functions, but gain more than you had before. You will need a mouse and keyboard to complete the steps, but you can still use the controller and gain root functionality and such if you are into those things. I know this is an extreme solution, but it worked perfectly for me, and took about 30 minutes of my time. I followed these instruction to do it. 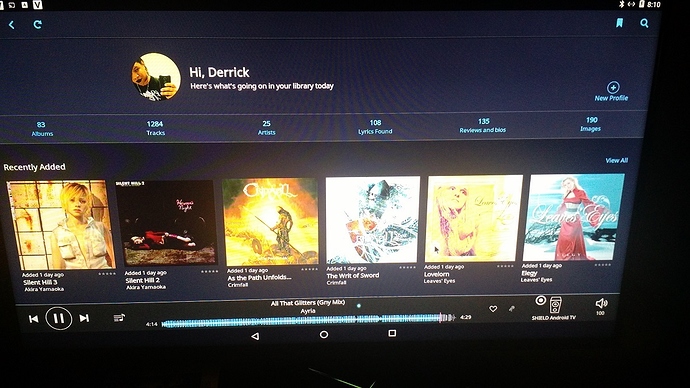 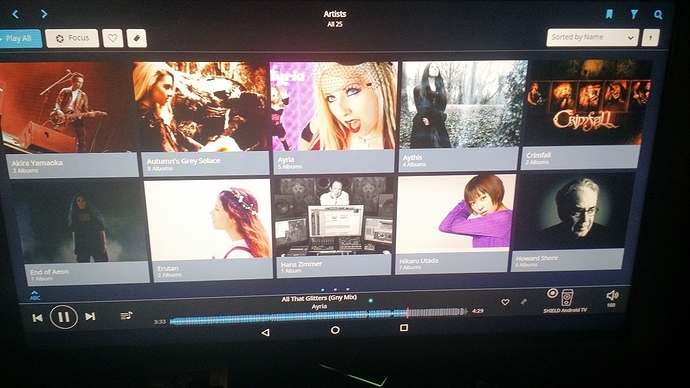 Side Note: Roon runs perfectly (This is a 55 inch TV, so the scaling is perfect, though if you have it rooted, you can change the DPI to adjust for 4k or if you want larger/smaller text), even with the tv off, it will keep playing out the receiver, you dont have to push play or anything everytime you wish to turn it off… Also it maintains full functionality just like the desktop/mac versions. If you do this, make sure to turn your Nvidia Shield Private Zone to - Off, so you can see it from other devices.

+1 to this from me. I’m trying to find a good way to use Roon from my couch and I haven’t found a way that really works. I currently use my android phone with a hifiberry roon bridge but I don’t like big phones so the artist bios etc are too small to comfortably use. I have an HTPC which works for a nice 10ft interface but as it’s also used for gaming it’s a bit noisy. Finally I have a surface pro which can send to the roon bridge but that involves getting up and going to get it (in which case I may as well just go and use the study PC/DAC).
I have an Nvidia Shield which is rapidly taking over HTPC duties with Plex, Netflix and gamestreaming working well. It has great audio support including usb DACs and google music/spotify support oob. Now that the linux server is in (and I’m using btw) a Roon Remote app would be awesome!

Can you control the Roon interface and interact with it while it’s running on the Shield?

Thanks for this post. Is Nougat on the Nvidia Shield still working well with Roon? What are your long term observations? I intend to buy one or two of these incorporate them into my home environment.