Odd random occurrences- Album is identified in Roon ok, disc and track numbers are in order, but if an edit of metadata on the file has been made, i.e genre, relaunching Roon will do its auto rescan but randomly splits a track number as a disc number i.e. for a 10 track album, track 8 will become disc 8 and not apart of disc 1. It’s fix it by manually identifying album again in Roon. Say if 50 albums had their genre metadata edited, about 7 albums will have this happen to them.
Viewing the complete Metadata tags of these files show nothing strange in JRiver and MP3tag, ie no random disc numbers and are clean.

I’ve seen that a few times, but in my case it was always a problem with the file tags.

Thanks for the report and apologies for inconvenience. Can you reliable reproduce the issue with the same album?

Do the tracks that get the wrong disc happen to have track title that start with that same numeric?
E.g. 50 ways to leave your lover.

ok, found couple of albums this has happened to,
a Yo La Tengo album, Track 14 has become Disc 14, the track title does start with a number, ‘3 Blocks From Groove Street.’

The Strokes - First impressions of Earth, track 13 ‘15 minutes’ has become disc 13. So yes, it’s track titles with numbers at the beginning that seem to be affected, so far.

Not sure if this is part of the same problem, but I’ve got an identified album where some of the track titles are numbers. These display OK for the most part, but there are two consective track with the same starting number and Roon splits them into a ‘work’.

Easier to understand from this screenshot: 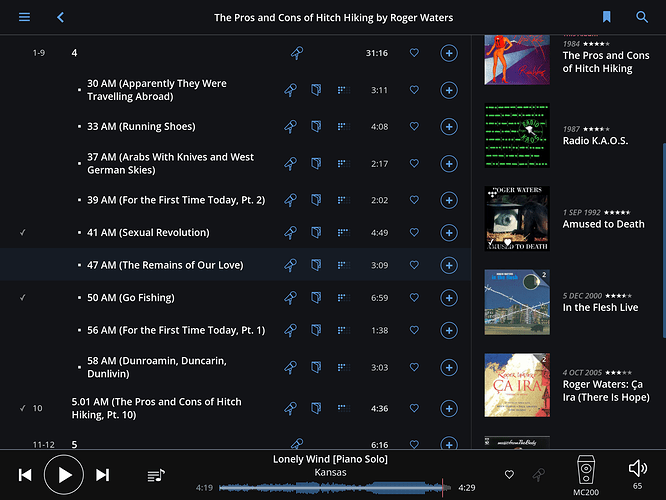 As @ncpl mentioned, we’re aware of an issue related to track titles that start with numbers.

The issue is already resolved for our 1.2 release, so let us know if you’re still seeing this after the next release goes live, guys. Thanks!

I made a mistake here guys. The bug I was referencing was actually fixed before we released Build 102, so you’re already using the fix I was thinking about

The issue here is that we are doing some automatic detection of multi-part works, and despite our best efforts, the system seems to be doing a bad job parsing these track titles.

This type of automatic detection is going to get a full overhaul as we shift focus and kick off some major work on metadata once 1.2 is released. That will happen soon, and this will get a lot more attention then. This shouldn’t be an issue once that work goes live.