The 30 CD Brilliant set of CPE Bach is ripped and (laboriously with some) most are identified and well displayed except for CD16: 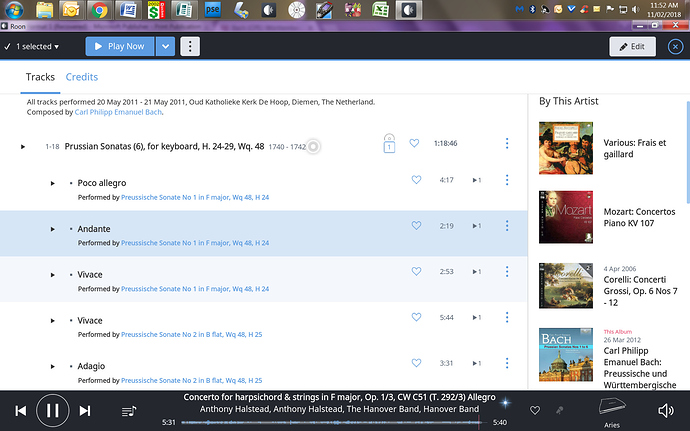 image.jpg1920×1200 454 KB
Instead of six sonata headings, the actual track data is hidden under “Performed by”.

I tried to edit but to no avail. Roon insists that the 18 tracks be displayed as shown.

Are the underlying metadata at fault?


But it looks like AllMusic have stuffed up and that is where Roon has taken its cue.

@JOHN_COULSON There is clearly an issue with the multi-part aspect of this composition which I may be able to persuade Rovi to correct. However, please would you check your PERFORMER, ARTIST, and/or PERSONNEL file tags to see if they contain, by accident, the track titles?

I’ve asked Rovi to take a look at the part titles for the Prussian Sonatas.

No, all seems in order. And thanks for taking notice and action about this - apprerciated.

I alluded above to some labour needed to identify some of these albums. Moving tracks down one by one is a VERY tedious process with albums like this with some having up to 32 tracks and are CD5 in the set. Doing it via PC is virtually impossible with only 3 moves at a time possible so I’ve used the iPad where 6 moves are possible each time.

But I ask if it would not be possible to say move a bunch of tracks x moves up or down at once? Or maybe it is alreadfy possible and it is my ignotance showing up again!