Ok, this is what I understand about RoonReady and streamers like Aurender

I currently have a Mac Mini/Uptone JS2-Uptone Regen-Berkeley Alpha USB setup going into my DAC. I have external hard drives but not a NAS. I’m currently using Roon with Tidal with great results. I believe it is a game-changer. Lately I’ve been researching purpose-built servers/streamers like Aurender. If I go that route, I’d like to store my files on the Aurender. As I understand the potential setup and scenarios for Aurender with Roon, they would be as such:

I would much like to see Scenario C come to fruition, but I fear that either Scenario A or B is more likely. Thoughts?

In any scenario where files are stored on the Aurender and you select the Aurender as an endpoint then the path will be Aurender > Core > Aurender. You may be able to do that with Ethernet, but my 801.11n WiFi didnt cope when I tried something similar with a USB drive off an Aries and Airplay.

I’m wondering about the sound quality at that point.

Ideally i would think you could hook them up like so: 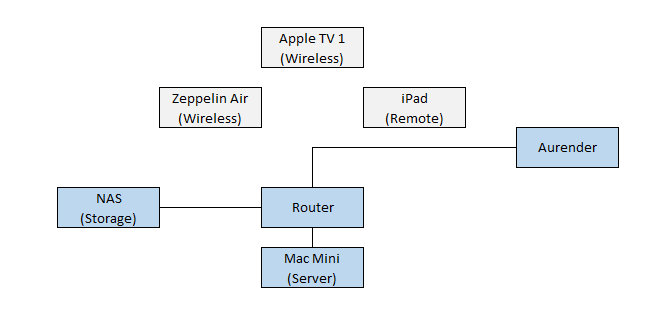 Where the NAS, Server, and Aurender are all connected to the same router/switch via a wired connection.

Storing all of your files on the NAS would have everything in a central location which would then be read by the server then pushed to the Aurender. All the work is done by the Roon Server to output the proper format to each device. I would also think there would be significant savings by going with an Aurender that doesn’t have local storage versus one that does and would easily exceed the cost of a really good NAS + drives. I guess i just don’t see the point of maintaining to separate storage points for the files when that can all be in a centralized location.

No clue how the Aurender app will work with Roon Server of if it will allow control of Roon but with the service I believe you should be able to control all of the endpoints with the Roon Remote app once everything is ready.

Yes, I mean NAS, not LAN. Your diagram is what I envision setting up IF storing the files in the Aurender is not feasible or would degrade sound quality when using Roon and the Aurender as an endpoint. Except I would have the AirPlay devices operating as RoonReady devices (yes, yes, I know, Apple). Thanks for the detailed response.

I would still very much prefer using the Aurender’s internal storage drive without needing to set up a NAS.

I guess it just comes down to the extent of integration between the two. It could be something where they release a product like the upcoming ELAC one that serves as server and endpoint and have it controllable through their app. I believe that would provide just the options you are hoping for.

Otherwise if the add the Roon Speakers protocol and not server function then it looks like scenario A would be the most likely one from what i can imagine.

I’m wondering about the sound quality at that point.

Based on what exactly?

Based on speculation, admittedly. I’m just wondering if having the files located on Aurender, RoonServer located on another computer, and RoonServer accessing those files and “pushing” those files back to Aurender as an endpoint might affect sound quality. I have no technical rationale for my concern, it’s just a hunch.

Part of the appeal of Aurender is its wholly self-contained architecture and functionality, apart from files streaming in over Ethernet. But If there is no difference between “Aurender-RoonServer-Aurender-DAC” and “Aurender-DAC” from a sound quality perspective, great. No worries from me in that case, though it would be nice to be able to use Aurender as both a RoonServer and an endpoint. However, that might not be feasible given Aurender’s hardware configuration.

One thing some of the roon folks here have emphasized (you can search a bit to find their comments) is their experience that all-in-one solutions tend to degrade sound quality because of noise. Hence their preferred setup where you have a storage + (roon) server physically separated from endpoints.

Yep, that’s so true, isolating the electrically noisy ‘computer’ environments from the sensitive audio digital/analogue sections in the DAC is critical in achieving the best audio quality possible.

My own preference is along the lines of:

With all these components connected to a hardwired LAN.

Plus a WiFi connected tablet device to run Roon Remote.

Yes, I’ve read as much. Aurender seems to be an exception in that regard, given their meticulous approach to isolating the components and functions inside the unit. I imagine the manufacturers of other purpose-built servers have taken similar approaches. It will be interesting to see how Aurender and Roon collaborate.

So the answer is simple – Roon does not work with Aurender.
If you are an Aurender owner, the idea would be to dump Roon and just enjoy the music.

Why do you say Roon doesn’t work with Aurender as an AirPlay endpoint ?

The discussion in this thread is about the signal path for local files stored on the Aurender internal storage when played through Roon to the Aurender as an endpoint.

Has anyone tried the less ambitious task of getting Roon to recognise the Aurender storage drive as if it was a network drive and then streaming from that storage to another Roon Ready endpoint?

I can confirm this works fine.