Do you, or did you have an open reel deck in your system?

We went from SONY to TEAC to Revox (B77). I know that master tapes are currently available and wondered in anyone has one or more.

Ah, reel-to-reel… I bought a Revox A77 back in 1969 for the princely sum of £187 and 19 shillings. That was a huge amount of money to me in those days. Lugged it back and forth to university, and used it to record live music and BBC Proms and plays off the radio. Finally sold it in 2006 (for more than I paid for it) after transmuting all my tapes into digital form. It was a great machine.

I had a TEAC 7010 (?) with an outboard Dolby B unit. I traded or sold it; cannot recall, and got the Revox B77. I used 10 1/2 inch reels upon which I would record any new LP that I bought. So, albums were only played once. I would use the reels of tape so that music while on dates would be continuous. I still have tapes going back to 1970, and I have a 7" Dolby of Surrealistic Pillow from back in the day. That one YouTuber (Techmoan?) always has his tape decks showing in his videos; very cool looking.

I have a couple of Open-Reel decks.

Unfortunately, my Revox B77 is the 71/2 speed quarter track variant (not so great) and in desperate need of a service, so it serves only as a nice ornament in my study. I also have a reconditioned Pioneer RT-909 in my main system which is much better, calibrated for a modern tape brand and used from time to time. I really don’t have a genuine need of a tape recorder these days, so its occasional use is really as much down to nostalgia as anything else.

I suspect that the ‘Master’ tapes to which you refer are those released by ‘The Tape Project’. I have never heard one, but the tapes are eye wateringly expensive (circa £300+ or so per album, and you need a very heavily modded tape deck (operating at 15" per second) in order to be able to play them. Anecdotally, they are the best media source you can get, but the price means that they are not for the likes of most of us on this forum - certainly not for me!

I have a Studer A810 that has been fully reconditioned and use an outboard Doshi tape preamp that is direct wired to the tape heads. I have a small collection of around 50 10" reels that are copies from real Master tapes or 2nd gen copies of Masters (often the real Masters are too delicate to make copies from).

Now that’s impressive. That’s quite a deck and your “small” collection seems very impressive. There is a disconnect for me between “affordability” and necessity. I have sold many things that were very pricey simply because I could not fathom keeping them. As @hmack said, the tapes are so expensive that it could be a burden to own an entire collection.

Tapes are a lot of work and, as you pointed out, can be very expensive for high quality. I probably use tape as a source for less than 10% of my listening. But when I really want to do some serious listening, I go to tape. In head-to-head comparisons using the same master version against vinyl, tape is better in terms of lower noise and better dynamics, especially in the bass region. Whether the difference is worth the expense is purely an individual assessment.

(is the Porsche avatar yours?)

Yes, after you get beyond the resistance and spend $10k on a deck, you then have to justify that decision by buying the tapes. I doubt that this leads to buyer’s remorse.

There is a deck that shows in some videos. I believe it is a high end Technics.

Yes, the Technics 1500 is quite good and I see a lot of them at audiophile shows for demo.

Had quite a number of Pioneer decks, the last one had been completely restored with new caps etc. This was a RT-707, the sub compact baby that could handle only 7" tapes.
However this was still very impressive and I did have about 150 pre-recorded rock tapes, Deep Purple, Pink Floyd, Fleetwood Mac etc and about 50 home recorded tapes.

Interesting tape I bought was a genuine factory copy of Mirage by Fleetwood Mac that was produced in 1983, making it one of the very last batches of commercial r2r tapes made/sold.

But with all of my various sources something had to give and I sold my last deck and ALL of the tapes on USAudiomart and fleabay last year.

Sometimes still miss the SQ but not the upkeep.

Sounds reminiscent except I bought mine after leaving university , maybe 1973 ish

I moved onto Nakamichis after that

I owned an RT 707, but divested myself of the machine and tapes in the '90s, along with most of my vinyl. i regret the latter, and am slowly rebuilding my LP collection. probably won’t do the same with R2R.

still, the RT707 was the sexiest piece of audio gear i’ve ever owned.

I had 3 of them all told with the latter having been restored having by far the best SQ.
I really liked the relatively small form factor and as all pre recorded tapes were of 7" format and the vast majority of affordable blank tapes also 7" it did not concern me that it could not handle the 10.5" tapes like its big brother the rt909.
I used a lot of TDK and Maxell blank tapes and had very little issue ever with flaking tape, not something I could say about some of the Scotch tapes I had tried! 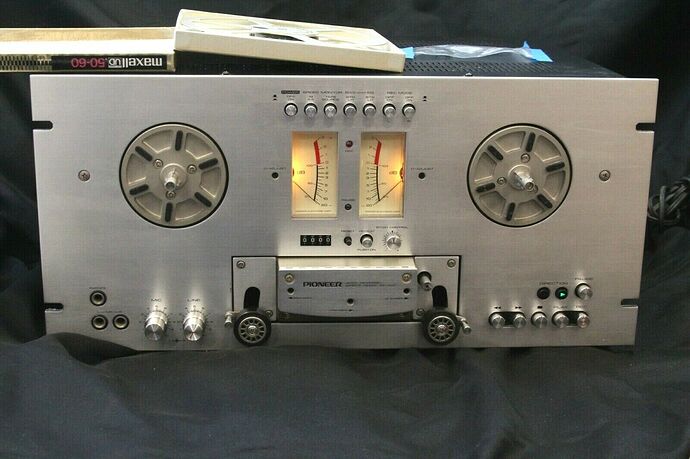 The man who has the YouTube, Techmoan, has a nice overview on Open Reel and its evolution and decline. There, he says, was to be a high dollar re-introductiion of decks in 2017 which never came to be. Likely the market is very small.

The upkeep would not personally bother me. Exotic cars were, for me, an endless series of tasks, but they were fun. Which brings us around to how much effort goes into playing LPs.

I don’t really see much effort in playing vinyl?
Sure it’s more involved that sticking a CD in and hit play but it’s a simple ritual

.
I tend to us clean every record I buy and use new mofi inner sleeves and that takes care of the records.
Cleaning the stylus is a very easy task too.
On a good table once setup that should be it, I rarely touch anything again unless I swap cart’s about.

There have been three paths I’ve seen emerging in R2R world over the last few years. #1 is what I will call the DIY world where people who have some electrical and mechanical skills (or think they do) are buying old decks and refurbing them. This is definitely the lowest cost way to get into R2R. #2 is there are companies like United Home Audio or J-Corder who take old Tascam, Technics, Ampex, or other readily available decks and rebuild them into reliable, fully refurbished machines, in some cases upgrading parts like motors and power supplies. These are more expensive than #1 but result in a reliable product that will give many years of trouble-free use. #3 are a few pioneering companies like Ballfinger and Metaxas and Sins who are building and selling completely new design tape decks with modern motors and electronics. I haven’t read any head-to-head comparisons of #2 and #3 but would expect #3 decks to be even better sounding and more reliable than #2. Lastly, there are companies like Doshi and Merrill Audio who are making tape preamps that allow for bypassing the internal electronics of a tape deck and providing an external preamp and tape equalizer, similar to a phono preamp for a turntable.

I am pretty sure you can add Bottle head to the list of tape phono preamps.
I considered it with an old Tascam I had acquired as a project but decided to just pass it along to someone more proficient than myself before I ruined it entirely!

I run a Teac X300 in my system. I got it to replace a Pioneer 707 that needed work (and I had never used after finding it at a garage sale) so I traded it to a guy at a repair shop even up. The Teac had been totally refurbished. I only buy vintage factory commercially issued tapes, never do any recording myself. I’ve been very pleased with the sound in my system. It won’t replace my main sources of music but it’s been fun to tinker with. This had been my first venture into open reel.

As you write, it is clear that the R2R can be a project all unto itself…its own hobby.

It absolutely is, a hobby within a hobby.
Nowadays I’m more into just listening than tinkering any further than my vinyl obsession entails.