Options to display Roon on a TV

I have Roon running on a RPI and a NUC next to my TV’s. The PI cannot run video from the HDMI. How can I get video? I use a Fire tablet on this setup so maybe casting would be a solution? Also I have the NUC hooked up to my TV’s HDMI port and it displays on my monitor but only stays on the main screen. How do I sync to my remote whether it be phone or tablet? Thanks.

HDMI does not work, at least from a NUC with ROCK (but I guess will if you run another OS on the NUC) but this does for “now playing” display:

If you have a Chromecast you can also cast the full UI from an Android tablet or via the Chrome browser on a PC.

Many other ideas here:

Hi, I’m fairly new to Roon and full of enthusiasm. I was inspired by this video and I like the idea of having a large screen displaying what is currently playing and allowing me or my significant other to control the system. I don’t have any hardware laying around though and I would like to keep the budget as low as possible. What I found out on my own: Ropiee with a raspberry display - Nice as a remote but smaller than I would like and no way of picking an album directly I could get a large…

Thanks. I run Windows on the NUC as an endpoint (Cheaper than a raspberry Pi) so it displays but as you said on a static screen. I’ll look into the articles.

I must be missing something. With Windows on the NUC, why not simply use the TV as the primary monitor with Roon running fullscreen?

Oh and I missed the fire in your first post. That should work similarly to Chromecast with casting the tablet screen, you just need a fire app on the tablet. (And my experience is that firetv cast works less well than Chromecast)

“I must be missing something. With Windows on the NUC, why not simply use the TV as the primary monitor with Roon running fullscreen?”

I am running Roon fullscreen on my TV but it just stays on the home page and won’t display lyrics, pics, etc when I am controlling from a phone or tablet. I must be missing something.

No, what I was missing was that you don’t just want to see the full GUI running on the NUC and control it from a BT keyboard and mouse connected to the NUC, but also from tablet and phone. For that, you will need some way of casting. On Android I’d go with Chromecast, but I recall now that Chromecast is not available on the Fire tablet (or was, at least). So you’d need to cast to a FireTV (stick). But my experience with this on a non-Amazon device (phone) was not great IIRC.

Thanks again, wasn’t even thinking of using a BT mouse and keyboard. That would seem a little cumbersome though. Alot easier to just use a tablet. I did a little research on casting with a fire tablet and it seems like a lot involved to go wrong. I have an android phone so I’m thinking the best route would be to cast from that.

Phone is not great though because a) the Roon phone app only works in portrait, b) doesn’t have the full functionality of the tablet app.

Just some ideas:
I use my Shield TV as a display. Some TVs will show up as display in roon also, just need to send to them: Try clicking on the volume icon in roon and see what displays are available. 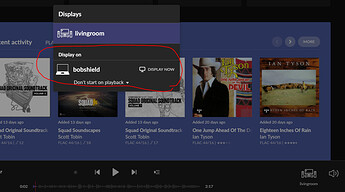 Also, on the NUC you have running and displaying on your TV, you would need to select the Zone you are playing from the Roon screen on the TV: 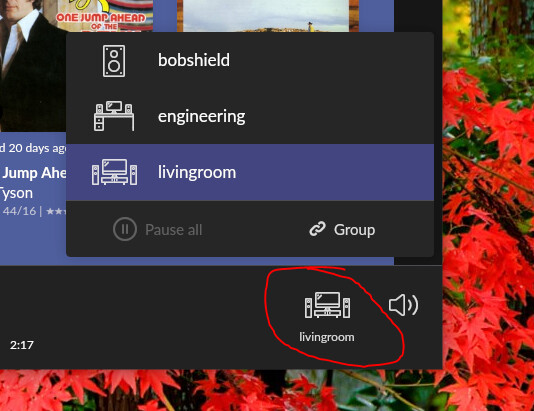 and then select the lower left corner to “activate” the track that is now playing:

image1563×365 177 KB
this will open the lyrics if they are available or will cycle through images if not: 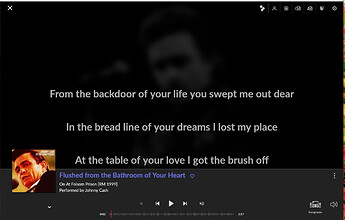 Yes, this is cumbersome and would require a mouse (unless your Tv is touch screen…)

Using FireTV, Shield TV, or AndroidTv or other device that you can select from the Roon “displays” is the most seamless, though.

I use a Mac mini for my core. The HDMI out feeds to a Yamaha AVR then to a 65" Sony. I have an Apple wireless keyboard and track pad paired with the mini, allowing me to see and fully control Roon a really big screen in front of me. At the same time, my iPad remote still works as a separate control device.