Orbi MESH network. Should I connect Roon Server via ethernet to nearest Orbi?

There’s no way to run a long ethernet cable all the way from my Mac Mini (roon core) to my FIOS (Orbi) Router. But I could move one of the MESH Orbi Satellites close enough to connect it via ethernet cable to my Mac Mini. …Would this be better than simply having my Mac Mini Roon Core connect to my network via ethernet?? The obvious response would be “Well, give it a try and see!” but it entails quite a bit of rearranging things so I’m hoping to know for sure before going to the trouble.

Are you experiencing any issues? Why the change?

There is still wifi in the chain, so, maybe. That said, individual cases are such that you really need to just try it. If we understood what you are trying to achieve then maybe others can let you know if that will help or not.

Thx for your reply!

I want this set up to be as reliable as possible. I just upgraded to an M1 Mac mini and a Cambridge Audio DacMagic 200M, which enables me to now listen in Hi-Rez MQA from Tidal. Problem is, after about an hour of jumping around to different MQA tracks it suddenly stops working. I can continue searching for albums but I can’t get anything to play - MQA or otherwise. I can get it working again only if I close and restart Roon/TIDAL. I thought it was maybe related to my Wi-Fi connection. (Which is extremely fast, BTW). I recall reading that it is recommended your core be connected directly to your router via Ethernet cable. That is impractical for me but I could connect it to the nearest MESH satellite if it would make my set up more reliable

but I can’t get anything to play - MQA or otherwise

Before deciding networking as the issue, what exactly happens when this occurs? Are there error messages?

I don’t think so. At least nothing I see using my IPad remote. It just randomly quits playing the next song I chose. Looking at Roon’s troubleshooting pages they suggest a lot of these issues have to do with connectivity. And Wi-Fi reliability.

Connect to your orbi satellite, thats my setup ethernet connected to my core and Cambridge Audio 851N no issues and very stable.

Ok… Well, forgive my ignorance… But do I then turn off wifi on my mac mini?? …If so, will my iPad that I use as a remote, find the core through the Orbi Satellite?

Hi @ODS I was using a Nuc running Rock for several years off an Ethernet port of an Orbi Satellite that was at the other side of my house without ever having an issue.
If you’re Orbi is tri channel it should have plenty of bandwidth available.
I could even play 24/192 and DSD256 to multiple rooms again with no issue.

I would definitely turn off WiFi and just use Ethernet for the MAC.

OK… Will give it a try. By the way, I do get this error in Tidal. could this explain why it quits? 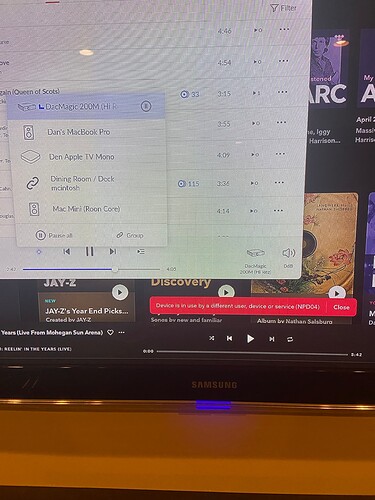 Wifi only allows for one device to “talk” at any given moment. Now, modern wifi gets around this with various tricks but the rule is still there. This is why enterprise networks have fairly dense Wifi networks… it allows for more devices to all “talk” at once reducing latency and jitter.

So, how is this relevant in your situation? The Orbi “mesh” manages a back haul channel for itself so that only the Orbi is “talking” on this network. This creates the “mesh”. The more devices you can “take off the air”, and let the Orbi just deal with the back haul “mesh” between themselves, the better your overall network should perform. I say “should” because nothing is a guarantee here as I don’t have a full evaluation of your network so I’m talking in generics.

Yes. A normal Tidal license allows one connection so if you are using it in roon and a normal Tidal client on a phone or other device starts up, one of the connections will be killed.
Does someone else us your Tidal?