Hi. I noticed re-released albums when exporting them through Roon will only show the original release year and doesn’t respect the re-release year. So if I have two FLAC albums, one with the original release year of 1988 and the re-release say 20 years later in 2018, Roon will export both albums. The ‘original year’ and ‘original date’ are correctly tagged as 1988, and so is the ‘date’ tag. I believe the ‘date’ tag should be set to the 2018 instead. There was a similar issue a couple years ago when using Focus: FOCUS : DIfferent date in Year Filter

I’m wondering if this is done on purpose and if there’s a reason that can be shared. I’m looking to prune my library of duplicate albums in multiple formats and am considering using Roon export to help mostly to standardize metadata tags like genre and naming conventions. But not showing the correct release date may be a showstopper and I’d have to consider doing it a different way.

Thanks for letting us know, @purehifi192. I’m checking with the team on this.

Awesome. Thank you. I’m also curious as to why the Genre tag is not standardized across various formats during the export? Though not that surprised because that one tag seems to cause biblical arguments. But if I have a FLAC version of a CD I ripped, which Amazon also provides access to digital format, and the iTunes matched version, I would somewhat expect Roon- when duplicates are set in the export - to standardize tags across the three albums. Since I’m looking to prune, it’s not that big of a deal, but trying to better understand how Roon does what it does

I just wanted to let you know that we have a ticket in with our team about this issue. I can’t provide and timelines just yet, but we hope to improve this in the future!

But if I have a FLAC version of a CD I ripped, which Amazon also provides access to digital format, and the iTunes matched version, I would somewhat expect Roon- when duplicates are set in the export - to standardize tags across the three albums.

Can you give some screenshots detailing exactly what you’re seeing here? I can run this by the team as well. Thanks!

Sounds great. So let me step back a bit and walk through how I arrived at these results using a specific album. I chose Gentlemen by The Afghan Whigs. I have the original version of this CD from 1993 plus the iTunes matched version. I also have the CD re-issue released in 2014 which I purchased from Amazon. So along with the iTunes matched version, I have the Amazon mp3 version that came along w/ the CD purchase. So five versions in total.

Both CDs live in one directory, the Amazon mp3 lives in another, and both iTunes matched versions exist in the iTunes Music directory. The CDs have been tagged by me, the Amazon version uses whatever metadata came from Amazon, and the iTunes versions were also touched by me.

What I wanted to see during export - with duplicates enabled - is what the metadata looks like across all five versions. I was specifically interested in the original release date (and year) as well as the reissue date along w/ genre, what the disc and total discs looked like.

I’ve chosen the first track and am using FooBar to provide you the information you requested. 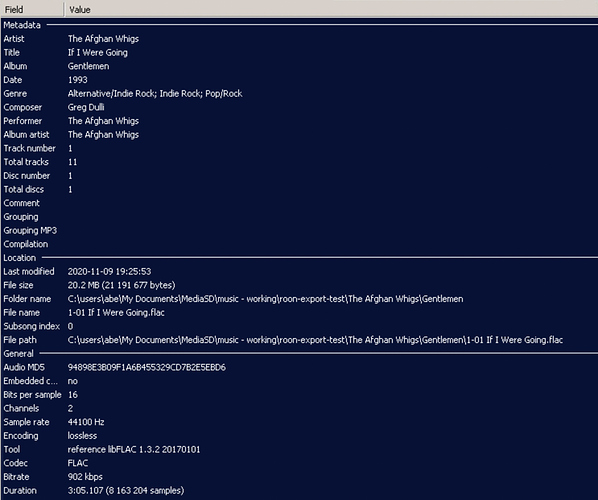 iTunes Matched version based off the original 1993 CD rip 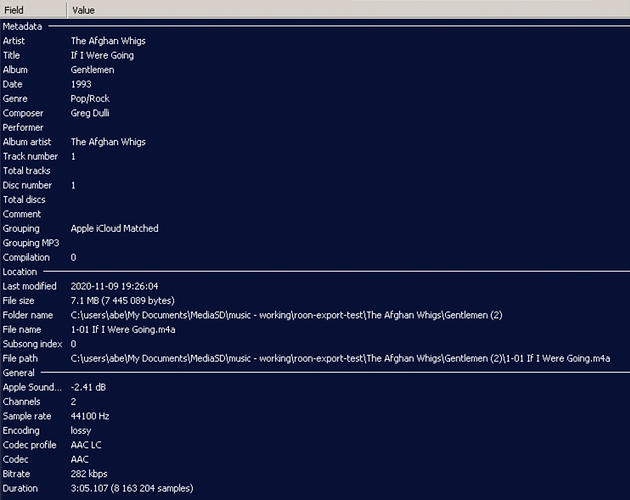 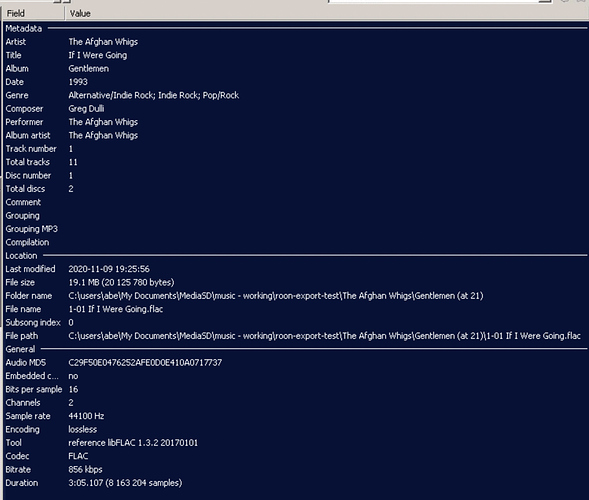 iTunes Matched version based of the reissued 2014 CD rip 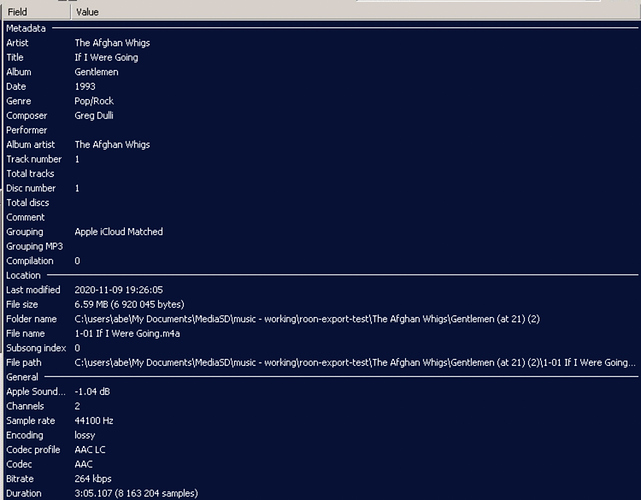 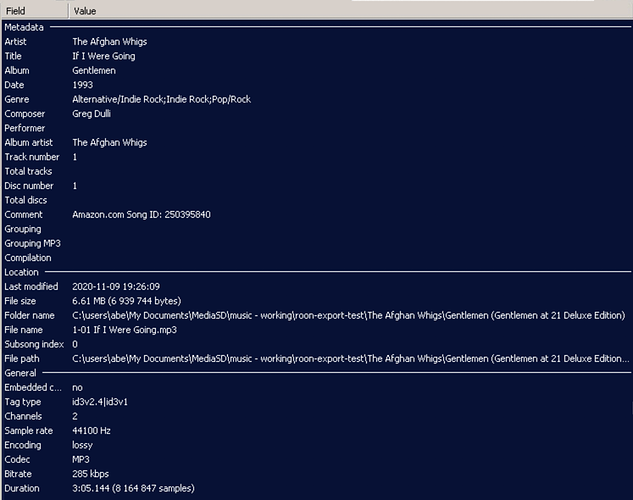 I get this may open up a can of worms. I guess I expected more consistency in how the export handled the metadata and specifically the reissued albums. They only refer to the original release date. This pic may be easier to compare.

Roon appears to change the release date metadata and that the files are not simply copied to a new aggregated folder. I certainly would expect the original and the reissue dates to match the original. I believe we can agree to that?

Now if Roon is making some edits to the metadata, I would ideally prefer an option upon export to also normalize other tags. I understand genre not being one of those because that’s religious. But am curious why not fill out the total # of tracks and discs or artwork? And maybe you do not do that on purpose which I would also completely understand.

The net of it is that I would hope for 2 flavors of one album and 3 flavors of the other each with consistent and accurate metadata during export to an aggregated location.

Here are the screenshots of the originals… 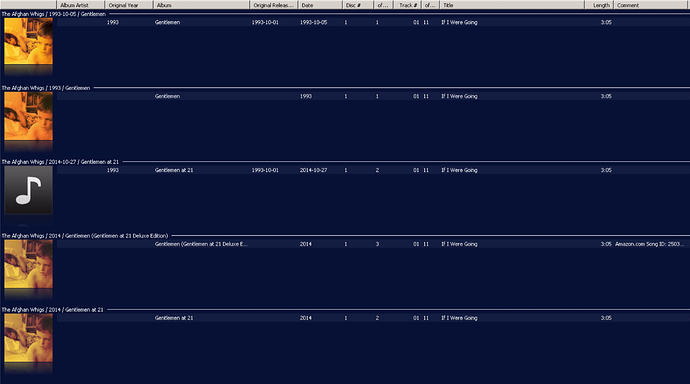 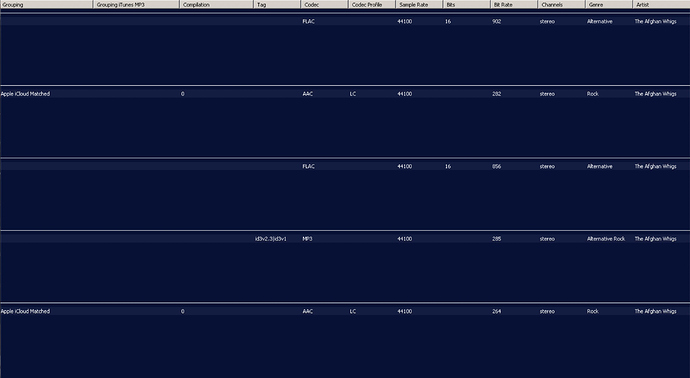 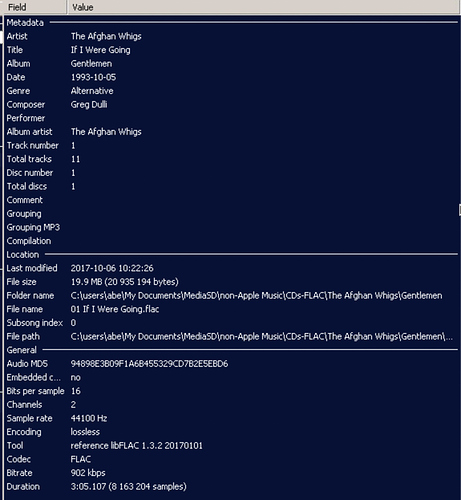 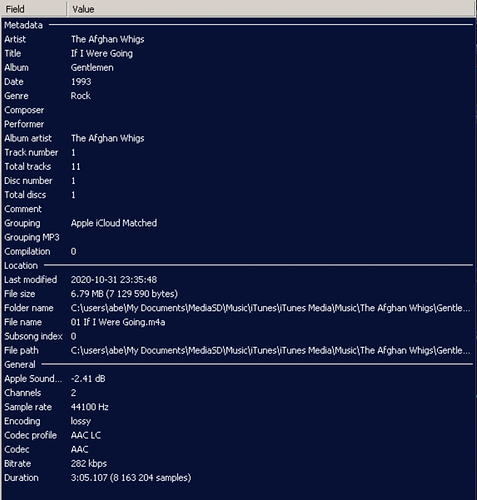 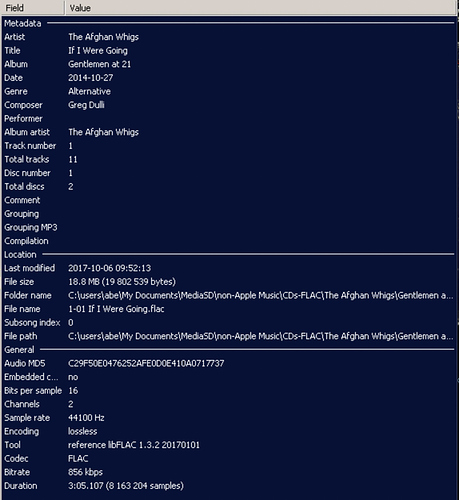 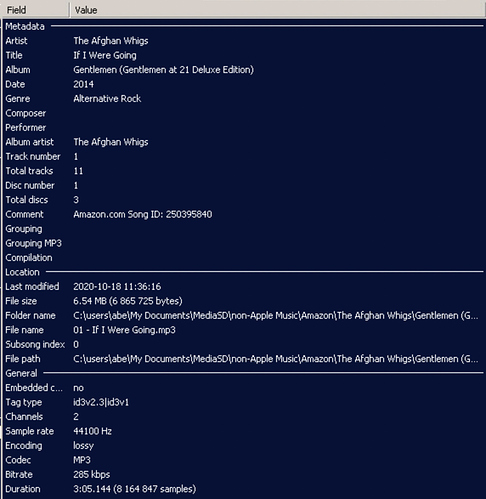 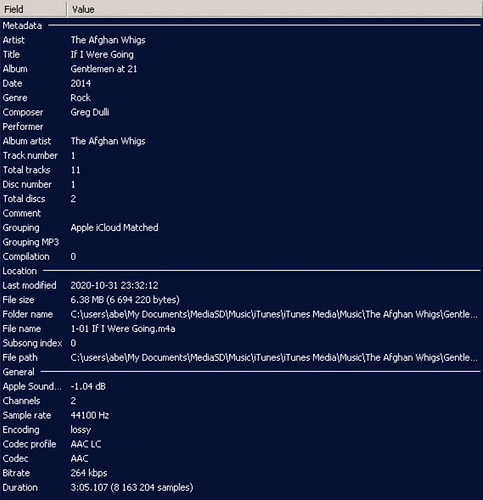 Roon appears to change the release date metadata and that the files are not simply copied to a new aggregated folder.

This is correct — Roon doesn’t touch the original files, but when you export files in Roon it will use the data in Roon and not the original data from the files. Currently there is no option to change this but I’ll be sure to pass that feedback along!

Doesn’t the data in Roon though differentiate between original and re-release? Why would it only use the original date for the rerelease?

My guess is, when I export from the Albums view to a CSV file, is because the original and re-release both reference the same rovi Album ID.