Directly connected to Router via Ethernet

Using Focal Celestee Headphones, I entered their EQ details that I found online into the Parametric EQ within Roon. When I engage the EQ, MQA is no longer available (no Blue or Green light). When I disengage the EQ, MQA playback is restored.

I’m no expert, but I understand that MQA uses its own EQ settings, so enabling your own EQ prevents MQA from rendering with its EQ, but you are still getting the MQA file, you just lose the indicator because you are using the parametric EQ.

What is in-between Roon and the headphones (ie what DAC are you using)? As per @Kursten_Hogard if you are applying DSP the you are not feeding the DAC an MQA bit-stream so it will not be recognised as such.

When I disengage the EQ, MQA playback is restored.

It should work, if you engage Roon’s MQA core Decoder in advanced device setup, so MQA signaling is preserved when using Roon’s DSP functions.

There’s definitely a bug in the Explorer² firmware which stop it detecting a renderable MQA Core (first decode) signal or displaying that it is detecting and rendering it. The same may, unfortunately, apply to the Prime. @john may have more knowledge than me here.

Parametric EQ in Roon is absolutely compatible with MQA rendering. I use it with my Meridian 818v3/8kSE system to implement room correction filters.

What are the Prime’s endpoint settings in Roon? Decoder and Renderer? Or something else?

This is the output without/with the EQ applied.

The Prime is set as Decoder/Renderer. 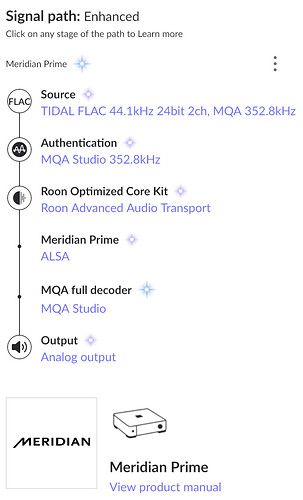 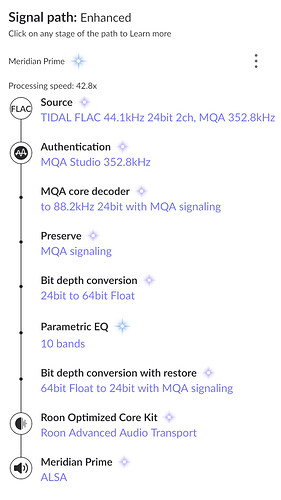 Unfortunately, that confirms my suspicions about the Prime. I think it’s probably a bug in the Prime firmware.

On contacting Meridian via my PP on this issue, their response was…

The Prime will not authenticate an MQA source that has had the parameters altered through an EQ system.

This goes beyond the usual scope of MQA playback and, as the Prime is older than Roon, as Roon update the software and add additional features the Prime is fixed to understand an authenticated MQA file only.

When the sound parameters are changed it does not meet the necessary checks and this is why the LED lights switch off.

What happens if you switch off Roon’s DSP but force it to decode MQA by setting the zone’s capability to renderer only?

If the Prime reacts the same way, the Meridian can’t claim it’s due to an “EQ system”.

I’ve received a further response from Meridian, via my PP…

The Meridian Prime has been fully tested with the MQA developer’s kits and adheres to the correct specification.

It would seem that Roon is not marking the decoded stream as MQA when the parametric EQ feature is turned on. This is likely the cause to why the MQA light is not lit on Prime because the
stream is not (MQ)Authenticated at this point.

It is common that many audio playback software’s break the MQA integrity when applying post playback features such as tone controls, EQ and even digital volume attenuation will have an impact. Altering the original source will break the MQA stream.

I believe the customer has already shown that the unchanged MQA signal works as expected and applying an EQ prevents MQA playback. I would suggest this is typical (and expected) behaviour of MQA.

It would seem that Roon is not marking the decoded stream as MQA when the parametric EQ feature is turned on.

Works with my 818v3, but it’s possible that it’s being a bit more clever in detecting the renderable stream.

I don’t want to point out the multiple errors here.

Anyway, the earliest MQA hardware could only recognize undecoded MQA streams, and could not do rendering only. MQA had soon evolved to be able to handle both undecoded MQA streams, or MQA Core (as decoded by Roon, Tidal desktop app, Audirvana, or Lumin hardware). However, for really old products this required a firmware update, which might or might not exist. Up-to-date MQA products should be able to recognize the EQ-applied MQA stream from Roon and display OFS or OrFS (or even MQB), or provide a suitable LED color to represent that.

But MQA was invented by Meridian (then licensed to MQA Ltd, a separate company), so Meridian kit is not even compliant with their own standard?

MQA was invented by Meridian

Not really; it’s more complicated than that. Meridian was owned (primarily) by Richemont; MQA was spun out; Meridian is now just a licensee of MQA technology.

Meridian kit is not even compliant with their own standard?

As per @wklie’s post immediately above yours, older MQA products required firmware updates as MQA streaming evolved. Unfortunately, both the Explorer² and the Prime are no longer current products.

It’s working on my system. My endpoint is a Brooklyn Bridge, which shows the MQA icon when playing MQA content with parametric EQ enabled. 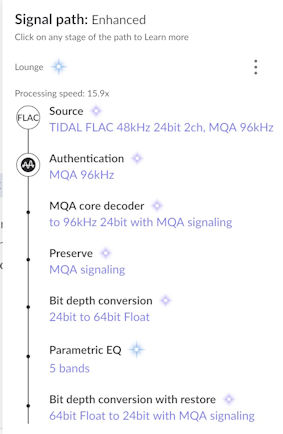 It is working on my system too. Bel Canto e.Stream endpoint shows MQB (MQB stands for 2nd unfold or rendering)whenever MQA stream is detected. 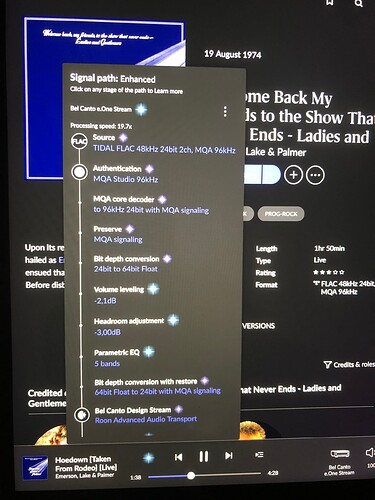 Is that a ‘Meridian Brooklyn Bridge’ or ‘Meridian Bel Canto’ Headphone Amp/DAC?

If not, it doesn’t help.

Why not? They are taking their time to provide examples of other gear which have no problem rendering MQA-decoded + DSP streams output by Roon. In other words, they are providing evidence which suggests that the problem is a Meridian one, not a Roon one.

Hi folks, I’ve been in contact with our device expert about this to see if he had any insight here.

He let me know that we’ve discussed this with Meridian in the past. While this typically works with most devices, there are some Meridian devices (Explorer2 and Meridian Prime) where things aren’t working as expected. We raised this with Meridian some time ago, but unfortunately, it sounds like this is not an issue that can be resolved at this time.

We apologize for the inconvenience!

Meantime, if there are other Prime owners who are willing to experiment/input the same EQ parameters into Roon (to ascertain/confirm that the issue affects their Prime devices), I would be most grateful.

This is with Prime set as Decoder/Renderer. 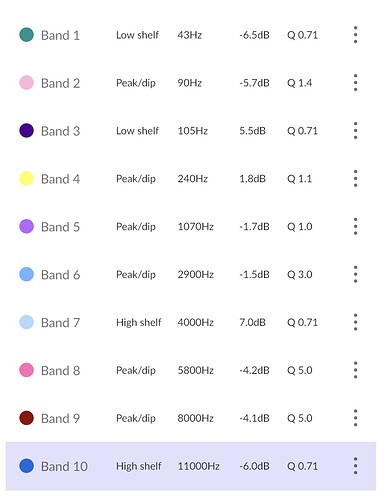