Eero Pro network; ROCK is connected directly to one of the hubs via Cat7 cable

Today is the first time since the 2.0 launch that I’ve attempted to add music ripped from CDs to my ROCK’s external SSD storage location and every attempt I make results in “Permission denied.” There is no additional information, just the directory I was attempting to write to.

I’ve never had an issue with this before. I run Arch Linux and connect to the Rock as an anonymous user (only other option is a Registered User with a name/password which doesn’t exist to my knowledge) and have been able to drag and drop hundreds of albums in the past.

Did something with the 2.0 update change permissions on the drive or for specific directories? I can’t think of anything else that would/could have happened. I haven’t touched the ROCK itself since initial setup/deployment.

Is there a way to adjust permissions on the ROCK easily through the Remote app on my iPad? Or can I do something via command line to change permissions, either on the ROCK itself after attaching a monitor or somehow through the SMB connection on my computer?

I have restarted both the server software itself as well as the entire NUC and it has made no difference. VPN is not involved, this is all local network.

Sorry, music is stored on a 2TB SSD attached directly to the ROCK via USB. Updated my original post to include it.

EDIT: Added a screenshot of what I think you requested. 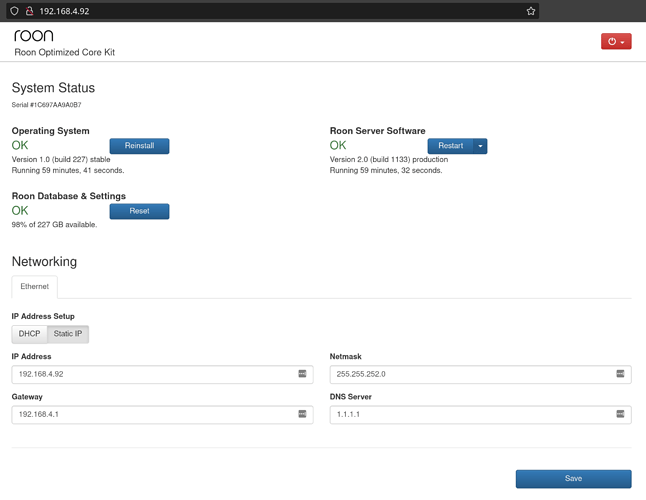 Then it seems to be an USB issue. What make and model is the external SSD, dito for the enclosure if bought separately (you may also google for known issues between Linux and your external SSD)? You can also try to “reset” your hardware (power-off the ROCK and remove the mains connection for 5 minutes, same for the SSD if it should have its own mains connection).

Added a screenshot of what I think you requested.

In your case it may be also of interest what is displayed in Roon|Settings|Storage.

If it’s a USB issue, then I guess Roon introduced it with the latest update. This has never been a problem in the 13 months I’ve had this ROCK until now and the only thing that has changed with it is Roon software.

EDIT: And for the record, the drive works perfectly fine when I connect it directly to my Arch computer. I’m dropping the files I ripped earlier without any permissions issues, so I guess this is what I’ll have to do from now on.

the only thing that has changed with it is Roon software.

AFAIK is providing a network share the job of Roon OS which hasn’t changed since August 2020 (build 227) and Arch Linux is a rolling release distribution that may update packages daily. So at least for me, your statement here is hard to believe in the context of your issue.

Instead of anonymous, can you try logging into it as “Guest” and see what changes? I was having authentication issues myself and this was the fix for me.