I was very close to buying a lifetime subscription this month before price increase but there is just way to many issues, everything is unstable now. Roon worked better for me few years ago when I first tried it, but now it is a mess.

Here are some of the issues I had this month with the 2 week trial.

Roon has so much potential. I could have probably dealt with the crashes and having to restart the sever a few times a day. But when I saw how hot it was making my 1TB iPhone I just couldn’t deal with that I want this iPhone to last a few years. There is obviously something wrong with it making a brand new phone overheat.

The reason I got back into roon was I finally had a 1TB phone (had 64gb prior) and with the new Arc feature I was planning on loading it with DSD through Roon.
Roon feels like a beta product to me right now. Not something I can justify dropping $700 on.

Please explain? What is the point in storing DSD on your phone?
Not trolling here, just curious!

Does iOS even play native DSD?

Can’t imagine it, since MacOS doesn’t either. I use a raspberry pi 4 with roopiee (Linux , alsa) so that works.

I’m running roon on a M1 MacBook Air and I have no issue at all with crashes etc.
Are you using a app like “amphetamine” to stop the Mac from going to sleep?

Is your Mac using WiFi or Lan? I’m using 5ghz WiFi and it works great. Even when upsampling to DSD512.

If you are using a regular usb 3.0 HDD I would replace that with something that uses USB 3.2 or even better thunderbolt 4 and use a NVME SSD as storage.

If you are using a regular HDD with a bad controller you might have a bottleneck there with 50.000 tracks and DSD files. And the crashes might be caused by the HDD losing connection

My 2020 iPhone SE does become warm after awhile while streaming through ARC and ARC also depletes its battery rather quickly. iOS reports the battery is still at 98% capacity and other apps make the battery last quite a bit longer.

My MacBook Air is connected through wifi to the router and doesn’t act slow and ARC works reliably.
It runs os macOS Monterey 12.6.2.

However I don’t play DSD files. The max I stream is 24 bit/192 kHz FLAC or MQA. I don’t use offline storage as my iPhone only has 64 gb of storage.

iOS devices can be used as a transport (to an attached USB DAC) for DSD (DoP), yes. But last time i checked Roon ARC had issues handling DSD downloads, not sure this has been adressed.
Just checked right now, and yes, it seems that downloaded DSD can be played back (through compatible external DACs) bit perfect. 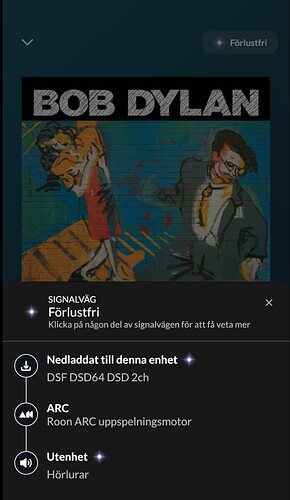 image918×1579 74.5 KB
A note though, blending DSD DoP with system audio doesn’t mix well, and just taking a screen shot of the play back causes a burst of noise through the playback chain! Quite uncomfy! 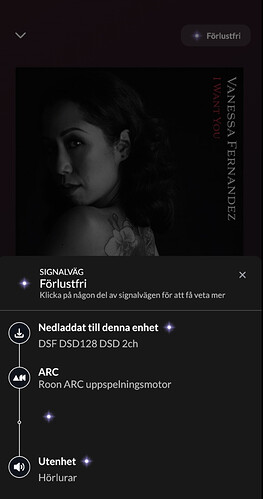 Rock+Ropieee. Apple devices are not often the best solution. M are great but not for Roon Core imho

I use EQ, Volume leveling, and upsampling to DSD512 on my M1 MacBook Air (with WiFi). Works flawlessly.
(Qobuz, tidal + local library on a external SSD)

Use a pi4 with roopiee as endpoint and no complaints at all.

Are you running lots of other things ?

I have several portable Dacs that support DSD. Including a e50 in the car.
I tried a lot of other apps for DSD. Most the apps on iOS that say they support DSD convert it to pcm. Roon plays DSD through dop to all my dacs. When it works. Just extremely slow to load tracks or app crashes at times.

Not without a DAC

How many tracks do you have in your library with the m1. The database files are on the ssd. The music files don’t lag when playing on the m1. The 5tb hard drive was tested and I gets 120mbs that should plenty for music even DSD. It is connected with usb c cable directly to one of the thunderbolt ports. 120mb that it tested is the full speed of the platter drive. But regardless I’m getting lag playing music already downloaded on the phone through arc. So I don’t see the usb drive in play here.
I gave the hard drive set to always on. I’m not using amphetamine.
I can not afford 5tb nvme drive for storing music lol. I’ve used the same drive with windows and foobar2000 and all music played fine and was very responsive. Also Audionirva works fine with this same drive.
Yes LAN.

Not to me fortunately, it’s been very stable since official release.
And playback is usually instant. It actually works very well for me.

I have about 5tb of music. So that is possible a factor.

Yeah I have a mojo too and this is what got me into roon again the DSD support over dop.

I have ropiee and KEF LS50WII. Both work well they seemed to work better in the past though. But my main complaint is iOS with arc. And slow database loading on roon core.
I’m not always home in front of my LS50’s.

Nice how many TB is your library?

No I’m not but it does seem like my library is much bigger than most. Are you running just core or server and core?
I’m running server and core on same machine. And ram usage is about 5gb total between the two apps.

How many tracks? Are you running server and core or just core?

My lib is just short of 200K tracks, basically 9Tb of media.
(Yes, lots of high res and DSD)