Playback problems and remote disconnects in 1.6

Been plagued with stuttering and play back just stopping since the upgrade to 1.6.

Clients seem to lose contact with core. Songs stopping close to the end. Clicking next track replays the entire track that just stopped. Progress bar stops updating even though track is playing.

Qobuz integration and radio are great additions but it seems that they have come at the price of what was rock solid playback.

Can you provide some specific examples of what you’re seeing here? What are you trying to playback? How long does it take (in seconds)?

Are all remotes losing connection to the Core or just some? Can you provide some more info here?

iMac and NAS connected to Netgear GS105Ev2 ProSafe Switch which is connected to a Devolo Magic 2 LAN adapter.

Devialet Expert 140 Pro connected to a Netgear GS108v3 ProSafe Switch connected to a Devolo Magic 2 LAN adapter. All Roon audo settings currently at default no processing of any kind.

The problem is intermittent. Play will either break up or stop, sometimes it will restart on it’s own, sometimes not. When this happens the core progress bar stops updating even if music is playing. When it eventually completely stops (often in the last 30 seconds of a song) hitting the next track button will more times than not move to the beginning of the track last displayed on the core. This happens with Roon Radio, Tidal Albums, Qobuz Albums and local content whether or not the content is CD quality or HiRes.

Before the upgrade to 1.6 this problem did not exist.

It has just stopped 54 seconds into the 5th track on a FLAC 44kHZ 16bit album being streamed from Tidal, the blue ‘graphic equaliser’ animation next to the track is still moving as if it were playing. Pressing pause and play has immediately restarted it.

If you play to a different endpoint besides the Devialet do you experience the same behavior?

I am trying another endpoint as we speak, will let you know how it gets on.

Seems like I may be having the same issue…

@c2c2c2 You have my sympathy this is really annoying. Yesterday it was stopping constantly, today it’s behaving better but wonder if the improvement is connected to Roon streaming to the other devices in parallel.

You have mine as well. It seems like there are many people mentioning various forms of performance-related issues, I suspect they may all be related to the same underlying cause. I’ve logged my issue and will wait for Roon to investigate… In the mean time, I always have Vinyl!!

(Nice gear by the way)

@c2c2c2 Thanks, yours is none too shabby either

Went out, came back.

Both 1 & 2 stopped playing, 3 still going. So not exclusively a Devialet issue, especially as they are both using completely different technologies to stream via Roon.

Thank you for the update. Just to recap, the Devialet and Naim both stopped, but the Meridian 218 did not. Is there any difference in how these devices are connected to the network?

I’d like to enable some diagnostics on your account so the team can take a closer look. The next time you experience a stoppage when playing to the Devialet can please make a note of the time. Respond here with the timestamp and your timezone and I’ll enable diagnostics for the team.

Yes both the Devialet and the Naim stopped while I was out so I don’t know when or why they stopped and haven’t had the time to trawl the logs to find out. The Meridian 218 was still going but had not been playing for anywhere near as long as the other two. All three devices are connected differently. The Devialet via the network as described above. The Naim is connected by AiMesh WiFi and the Meridian is by ethernet into the same Netgear switch as the iMac core and NAS (essentially as close as realistically possible).

I have just kicked off the Devialet playing a Roon Radio selection, will get you the timestamp etc the next time it stops.

The track Shoot Trouble by Caitlin Candy glitched (breakup, stop, start) half way through and then stopped playing at the end of the track. The Roon Core progress bar froze halfway through the track (at the time it glitched) see attached screen cap. This was at 14:22 UK GMT.

As you can also see from the screen cap Roon Radio had chosen the next track, hitting forward skipped over this track and playing has now resumed.

Before I sent this I had a quick look at the log and noticed that there is a [library] entry talking about dirty tracks, don’t know if this is significant but the timing looks suspiciously close to the time the track glitched. 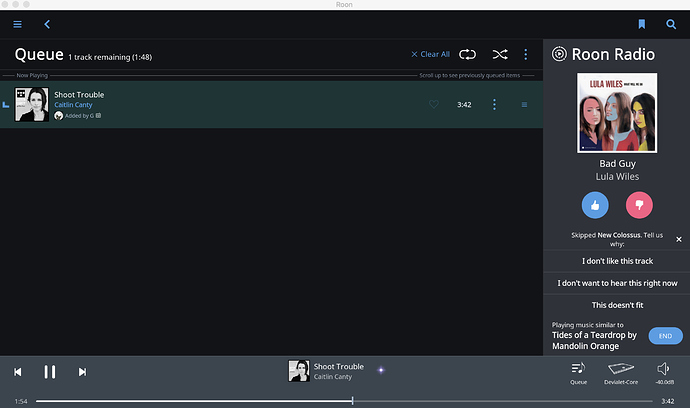 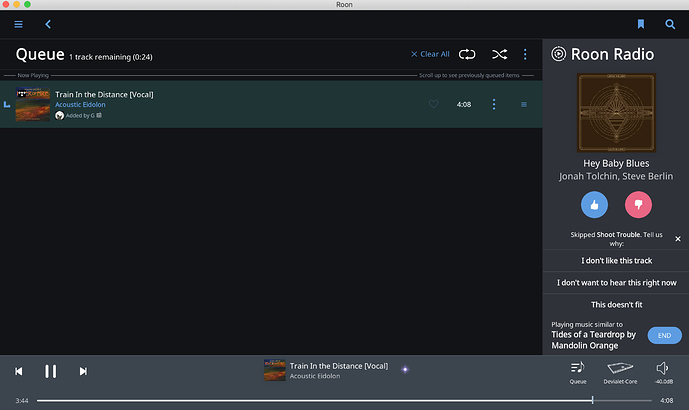 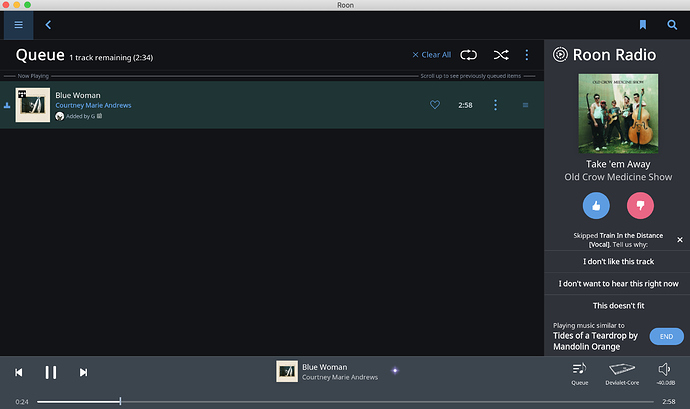 I appreciate the timestamps, @KAB.

I’ve enabled diagnostics on your account — The next time your Core is active the report will upload to our servers. The team will take a look and I’ll be sure to update you as soon as I’ve received their feedback on this.

I spoke with the team about this and wanted to reach out with their feedback. In the diagnostics report the team is seeing some networking issues which appears to be the cause for the behavior you’re seeing.

Moving forward the team has suggested simplifying the network in an effort to track down where this networking difficulty is stemming from.

Since the switches are managed, I wanted to mention that managed switches often times can require some additional setup as mentioned in our networking guide .

If possible, can you connect your Core and an endpoint directly to the router, bypassing any switches? When doing this does the behavior you’re experiencing go away?

Thanks for the feedback. In an attempt to start from a steady base I had reset both switches to default settings. I had also set everything in the network path to have a static IP address (Devialet, Magic LAN adapters, switches and Core, NAS was already static), this appeared to help reduce the issue. Also earlier today I noticed a few issues that were appearing in the router’s logs, I’ve taken steps to eliminate those issues.

For unconnected reasons I’m having to recover the iMac from a TimeMachine backup from a week ago. Once I have the iMac up and running again I will begin testing again. That may be a few days as time to do this is at a premium over the weekend.

To start with I will try enabling flow control on the switches to start with and see what that does.

Connecting the Core, Devialet and Router directly may be possible but does not represent how I want the system to work or how it was working. I would rather try and identify the issue with the infrastructure I have in place and eliminate it, if that is what Roon is suddenly sensitive to. If that doesn’t work then of course we can try building from basics.

OK so the issue appears to have gone at the moment.

I would be interested if you could privately share the details of the network issues that you identified.

I think I have traced the main culprits that was causing the freezes but it is hard to be 100% sure.

A Foscam R2 CCTV camera was constantly dropping and reconnecting to the network and each time appears to have be demanding a DHCP supplied IP address. When I gave the Foscam a fixed IP address the disconnects reduced, changing the 2.4GHz WiFi channels and upgrading the antenna also seems to have improved it’s stability.

There was some kind of issue with network packets being flagged in the router log as being sent to the source that they originated from. Removing the second LAN connection to the NAS and switching off link aggregation seems to have got rid of these. Not sure they were ever an issue that was related to this problem but it was fixed.

Finally I have removed the Asus AiMesh node that was boosting my WiFi in one small area. This is new technology for Asus and as such perhaps a little less stable than it will be when it’s matured.

Thank you and the team for your support and input.