Can we please have a way to export just m3u playlist without the need to copy the music files themselves? I don’t need to duplicate my files. Just want to be able to generate m3u playlist from Roon. There’s no other player I have used without this simple feature. I’m actually surprised that the Roon community is not bothered by the present implementation of playlist.

There are times where this would be straight forward, but there are other times where I’m not really sure how this would work. Keep in mind that an M3U file is a list of paths, one path for each file in the playlist.

Imagine your Roon Core has two watched folders: /Music from a USB hard drive, and /High Res which is on your NAS. You also have a playlist with a mix of tracks from those two folders.

Now, lets say your Core is on ROCK, and you’re running Roon on a Mac. If we were to export an M3U, what would the the paths in the M3U be? Does the Mac have access to the USB drive? Probably, but it would need to be logged into ROCK’s shared folder. And there’s really no way Roon can know whether your Mac has access to the NAS at all. It’s nearly impossible in this situation for Roon to export an M3U that’s going to work.

Exporting an M3U + files always works – that’s why we built that feature. If Roon is running on a single machine then exporting only the M3U would work in some cases, but it also wouldn’t work for, say, copying files to take with you to play in the car.

It may seem like I’m describing an overly complex situation but many people use Roon across the home, and as a general rule we try to build features that “just work” across all platforms and devices so you don’t have to think about it.

What’s your use case? I can’t promise we can do better here, but we can think about it a bit more if you explain what you’re trying to do @kayo. Either way, thanks for the feedback!

Thank you for responding to my post.
No, you’re not describing an overly complex situation. The problem is we are trying to go the Apple route where it “just work” which sadly is an euphemism for taking away some basic skills from the user.

Now, lets say your Core is on ROCK, and you’re running Roon on a Mac. If we were to export an M3U, what would the the paths in the M3U be? Does the Mac have access to the USB drive? Probably, but it would need to be logged into ROCK’s shared folder. And there’s really no way Roon can know whether your Mac has access to the NAS at all. It’s nearly impossible in this situation for Roon to export an M3U that’s going to work.

Very simple. Simply output the m3u paths from the server path irrespective of how many folders the user has configured. It will output paths relating to all those folders as long as a song in the playlist references that path. If for some technical reason, this were impossible, then output the path based on what the Roon Remote can reference.

What’s your use case? I can’t promise we can do better here, but we can think about it a bit more if you explain what you’re trying to do @kayo. Either way, thanks for the feedback!

Use case is to be able to migrate my playlist, if need be, to another program.
When I joined Roon, this is exactly how I migrated all my playlist from JRiver (which I have been using for years) into Roon. Had this ability not existed in JRiver my carefully curated playlist for years would’ve been locked in JRiver. My JRiver was on Mac but I started my Roon core on Windows before migrating it to Ubuntu server. Changing the playlist path from mac to make available for Roon on Windows or Linux is simply a matter of opening a text editor (Notepad++), “search and replace” to substitute the correct Drive or NAS path.
My other use is managing my DAPs in JRiver as opposed to Roon since the former has a far more robust way of managing audio players. I have looked into the M3U paths generated by Roon, it uses relative paths “…/.”. All well and good except this playlist type does not work in Sony DAPs, neither in my A35 nor WM1A. 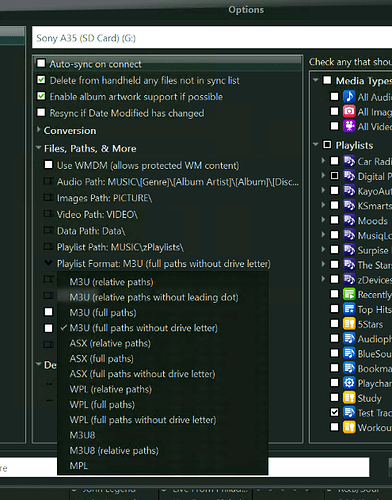 I should be able to export my M3U from Roon, adjusting the paths in a text editor, if necessary, for JRiver to reference and then transfer to my DAP.

For the past few months using Roon (really great program, no doubt) I have been extremely reluctant to curate playlists. Why should I spend hours, days, weeks, curating playlists that will be locked in Roon? Exporting said playlist + files is an non-starter for me. I don’t need to spend needless hours exporting and duplicating (which I will delete anyway) 8000 songs just to generate a M3U playlist, which by the way can be generated in seconds without the files. Same reason I just enjoy online streaming but avoid personal playlist, knowing if I ever leave that service, all is in vain.

Finally, irrespective of my usage scenario, I believe it’s a terrible disservice for a robust and wonderful software like Roon to overlook something as basic as exporting M3U (without files).
Thank you for your time.

Currently, roon client only exports m3u playlist file in addidtion to a 1:1 music file copy of the files referenced by the original roon playlist. Please, add m3u playlist export without copying all the referenced files. This would be of really great help when using external file conversion tools. thanks, Matt

Currently, roon client only exports m3u playlist file in addidtion to a 1:1 music file copy of the files referenced by the original roon playlist.
Please, add m3u playlist export without copying all the referenced files. This would be of really great help when using external file conversion tools.

I also agree because I want to use playlists created by Roon for iTunes and other players.

I am new user and would have to agree having the ability to export a playlist to m3u is important. Let’s say I create 20 playlists, all files locally on my home server. What’s happens if I don’t want to use Roon anymore? How do I get my curated playlists out? Having the ability to m3u would help. I found a work around to export to excel, then copy path to a notepad file and save it as m3u. However this approach messes up the order in which the files are ordered in the playlist. Using m3u files is how I initially imported some already created playlists from another program.

Simply output the m3u paths from the server path

Hi. I agree that it would be really nice to be able to export m3u’s that would ‘just work’ (In the sense of containing path / location info that is correct when/where you want to run it).

But this wouldn’t be guaranteed to achieve that. The local or network path to your files as seen from the core could be different from where you would attempt to use the exported m3u to point at them, resulting in failure. It would work in some scenario’s as @mike pointed out, but not across the board, it seems to me.

All I want is order of files on playlist and path location, thrown into an M3U file. Accessing this file on another program would not be an issue, since my local NAS, would retain the same path and file structure. Creating a playlist in Roon would be a waste of time, since I won’t have the ability to export the curated playlist to another system. I am not using streaming services, just locally stored music files on my NAS.

Every other music program does this? Itunes, Mediamonkey, Subsonic, even Plex with a pugin, etc. Surprised Roon doesn’t. I understand streaming services are a different story, however I am talking about locally stored files on a NAS.

Any progress on this request. This simple feature is needed. I am a new user, I don’t feel comfortable creating custom playlists without having the ability to export them to another program. I was really surprised this feature was not included already. I saw the export feature, but was surprised to learn it exports files. Why? Would anyone want duplicate files?

Further to the requests here, can we have a .m3u playlist with the files in the correct order?

For some weird reason Roon can export a playlist to .xls where it can’t to m3u. However the spreadsheet list is just in alphabetical order, completely destroying the playlist for most intents and purposes.

At least one can create one’s own m3u from the xls file, except you then have to reorder every line manually to match the original playlist order. Massively unnecessary time consumption.

If getting the path right is the key issue as to why developers can’t do this, then just create the list with the file paths as is done for the xls export (in the right order, please!!), and allow the user to massage their own paths. Doesn’t seem that complicated to me.

+1 for this feature. If I am going to use Roon as my main audio player, instead of iTunes, then I need to be able to create an m3u playlist, which references the path to the original files, i.e. the files that Roon uses - not duplicated files. This is because I use DJ software which I need to be able to import m3u playlists into, and I will want to build these playlists in my main audio player.

Removing EXTINF-lines did the job

Playing around with this I also recognized exporting playlists also exports the music-files.

I can accept Roon does not touch my imported playlists when I want to extend an imported playlist in Roon, but at least I should be able to export the created local copy of the playlist when editing without the files for several reasons.

I really would like Roon to figure out a way to implement a turnkey playlist export function that I can than upload to Apple Music so I can listen to my playlists on the go, and not just on my local network through Roon.

Is it that hard?