So, I have several playlists made up of tracks NOT in my library. When that tracks gets changed by the streaming service it becomes unavailable. Fine. However, I have something weird happening mainly with Qobuz tracks. See below:

In the pic 2 tracks have become unavailable. If I try and go to the Billy Paul album, I get, no album found which is what I would expect.

If I go to the Harold Melvin and the Blue Notes album: 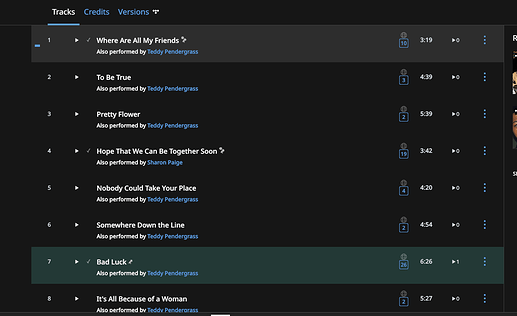 The Track “Bad Luck” which was “Unavailable” is not listed as such on the album page. However, it cannot be played; clicking the play button does nothing The track in the album should also say “Unavailable”.

Also, the track in question in highlighted when I go to the album. Re-syncing with Qobuz does not change the situation.

This is not unique, I have a whole playlist of songs having the same symptoms as the track “Bad Luck”. I have been encountering tracks in Qobuz albums which just won’t play. Maybe it is the same issue, an unavailable track not indicated as such.

I just gave this a test on my end and it worked okay. I also reviewed our data for this album and it looks like this track should be available for streaming. Can you try reproducing the issue once more (i.e. try playing Bad Luck from the album page) and let us know the time you do so? I’ll enable diagnostics and have the team take a look at what’s going on.