I apologize; this must be a metadata 101 question. Take a look at the following possible match for a boxset: 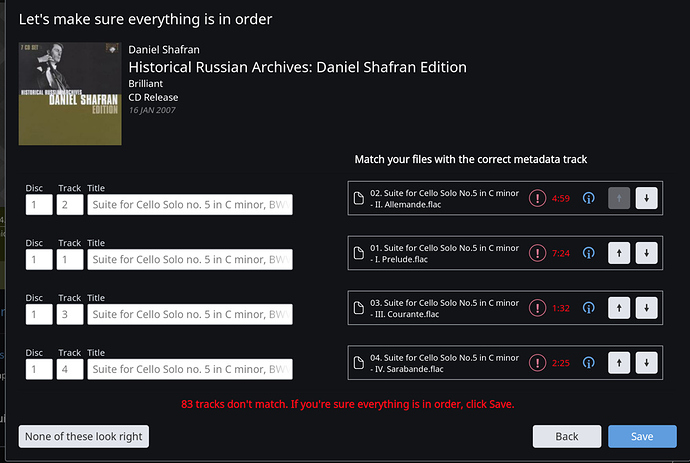 The top part is correct (name, cover, artist, label), but there are no tracks to compare with. Sorry, but what is the significance of this? Is this a match with a bona fide database? I just don’t understand the meaning of this, so I don’t know whether to select it or not. It doesn’t seem to help when I do select it (presentation-wise) so I imagine I’m not understanding this rather common type of option.

Similarly, there are often cover-less choices. That, I guess, seems more clearcut. Roon is saying this is a bona fide match against a DB (Rovi), but it is a match that has no art in the DB.

Can you provide any clarification?

Misidentification of tracks in Bartok "The Piano Concertos" with Kocsis and Fischer on Philips
joel June 24, 2018, 3:39pm #2

It’s a trackless entry from the TiVo database. That’s all we have for this album, I’m afraid.

Sorry, but what is the significance of this?

My guess: it may help with artist identification. Primary artists should get recognized … not much for an entire album but something, especially if the artists were not IDed before. That’s why I usually accept those matches if nothing else comes up, the artists aren’t IDed yet and the data seems right.

Thanks for the question, I have come across these quite often and wondered what they were. They seem to appear last in the list so I always interpreted it as a ‘nothing fully matches so here are the track names taken from your metadata’.

It’s a trackless entry from the TiVo database. That’s all we have for this album, I’m afraid.

Quite okay, Joel, just trying to get a clear mental model.

So, followup questions: what would be the advantages of accepting this ID? [My guess: album level stuff like release date, label, album artist, official album title.]

Disadvantages? Let me offer a disadvantage I think I see. If an album is IDed, the tracks become more or less “immune” to user edits. So, for example, once Roon IDs the album, I sometimes see Roon ignore (and worse, not link) my new, accurate wording for a currently unlinked composition. I have assumed that is because once Roon IDs an album, it “locks” out significant changes to its tracks. “Significant” changes would include track titles, for example.

If I’m wrong, please correct me.

what would be the advantages of accepting this ID? [My guess: album level stuff like release date, label, album artist, official album title.]

That’s pretty much it. When Roon launched, we didn’t publish these “trackless editions” to the metadata service, but we realized that there was [some] value there: album-level cover art; credits. We won’t identify your album to metadata without tracks automatically, but the album is there should you want to do a manual search/identification.

Disadvantages ? Let me offer a disadvantage I think I see. If an album is IDed, the tracks become more or less “immune” to user edits. So, for example, once Roon IDs the album, I sometimes see Roon ignore (and worse, not link) my new, accurate wording for a currently unlinked composition . I have assumed that is because once Roon IDs an album, it “locks” out significant changes to its tracks. “Significant” changes would include track titles, for example.

No. If Roon has no tracks for an album, there is no track-level or composition-level “immutability” here; there can’t be because your Roon Core doesn’t have any track-level metadata for the tracks.

Presumably though if the user makes an edit within Roon the metadata is locked as usual and no improved metadata that might appear will be applied as usual?

I always take these kinds of IDs and edit tracks and track credits external to Roon, partly for this reason.

Presumably though if the user makes an edit within Roon the metadata is locked as usual and no improved metadata that might appear will be applied as usual?

Correct. It is our stated intention always to honour an edit, even if that comes at the cost of improved metadata not being used.

It is our stated intention always to honour an edit, even if that comes at the cost of improved metadata not being used.

I apologize to those who contributed to this thread, but I realize that I didn’t provide a proper framework for my original question. Nor was my question complete. So allow me a mulligan, please.

Background: I had an album whose only reasonable Roon match was a trackless one (described above) that had just the art and title, no tracks. I, like Ludwig, usually accept Roon’s match for the art and some of the credits. Better off than I was before I started, I figure. So I did. Also, to avoid mysteries, I Reverted all previous user edits.

Next, I got the tracks ready to be IDed. I have had lots of practice and some success doing this. [I, like Ludwig, do most all of my edits outside of Roon using Yate, Metadatics and/or mp3tag. Occasionally I use Roon for minor, cosmetic edits.]

My general strategy is to check for full composer names for set of tracks and to amend composition and movement titles so that they match reality and use a syntax similar to other library or TIDAL performances.

I have learned through trial and error that successful composition IDing depends upon at least the following: a very specific wording of the work’s name (which can include a number and a musical key and maybe modifying words such as “…for orchestra” or “…for solo piano”) ; an opus, if it has been assigned one; and a composer’s full name (“Bach” doesn’t work at all; " Bach" must be used because of all the talented relatives.)

I have also learned that, even after careful attention to these details, Roon may still fail to ID the work. I have been told that Roon sometimes needs to triangulate on a match using imported TIDAL albums (my words),

To maximize chances for success, I used Roon’s WORK and PART tags (not WORK NAME and MOVEMENT NAME). I then carefully split each track’s title into WORK and PART tags, careful to abide by the wording that Roon has recognized with other performances.

I decided not to search MusicBrainz or Discogs via my tagger because I didn’t want to confound Roon’s ID process.

Once all necessary edits were made, I saved my tagger’s changes and waited for Roon’s processing to finish, and the result was:

Practically NOTHING. No change in work or part titles, no change in composition grouping, and certainly no change in linking success. Roon did accept my composer edits.

Roon continued to display an un-munged track title and ignored my my entries to PART and WORK tags.

Since this set of events made no sense to me, I tried to figure out why.

I guessed that Roon was not reacting to my edits because it had successfully IDed the album (Ludwig called it “locking the metadata as usual”). Joel said the ID could not have been the reason for my phenomenon. I accept that and I admit that I was guessing, but that was all I could muster.

And my album remains unfixed.

So with this new background, my revised question is: what are all of the reasonable ‘circumstances’ (such as file conditions, tag settings, user preferences, a specific user error, or the like) under which Roon will refuse/fail/neglect to reflect a user’s changes to an album’s file tags?

A complete answer will allow me, maybe others, to anticipate tagging problems in the future and avoid having to tease it out of my/our continued trial and error process.

I also acknowledge that I could, and perhaps should, just not bother.

To make a composition id, even on an unidentified album, roon doesn’t seem to care what you set PART to. In these cases I usually set WORK exactly to what I find in allmusic rather than a previously ID’d composition in my local roon library. The reason for that is that I regularly find 2 or more similar compositions on allmusic (orchestrated version vs. piano version for 4 hands, for example). Doing the detective work I then regularly find that in my roon library, compositions that I thought were ID’d ok were in fact rather randomly assigned to the different variations of the composition. This can and often leads to me backtracking through the WORK/PART tags in multiple albums to fix the assignments.

Sometimes even this is not enough. I don’t think it is generally realised how many roles roon is using as a “COMPOSER” type. Common ones are Original Material / Composer / Arranger / Orchestrator. Some compositions have long histories of collaborations and combinations of all these roles. Rovi seems to mess up the assignment of composer roles of these sorts of compositions on a regular basis. You will have to align your tags with allmusic to get a composition ID. So I am finding on a regular basis I have to edit 3 sets of tags:

Now this is not quite right. Respighi is usually credited as the “arranger” and/or “orchestrator”. That’s exactly what the roon text says for the work. So what I ended up doing was assigning Rossini as “Original Material” and Respighi as “Arranger” in the PERSONNEL tag. Roon treats both these roles as some kind of composer and suddenly I got a composition match on an unidentified album. Unfortunately, it is 2 steps forward and 3 steps back as all I am finding with this sort of detective work is how arbitrary the composer and work assignments can be where there has been a history of transcription and re-arrangement of the work of various sorts.