Windows 10 build 1903 all patches, most current roon client and core

This behaviour is true for all kinds of text entry like naming devices etc. It renders roon almost completely useless (no search, no music).

Hi @noris, this is good news indeed. As more and more people are moving to build 1903 this will be a real issue, so it is good to see the team is working on it.

Just adding in my 2 cents:
I have the same issue on 2 Windows tablets: one is a Surface Pro, the other is a Lenovo laptop that can be turned into a tablet. In tablet mode this issue appears, in desktop mode it doesn’t.

I also have this behavior in the Qobuz Windows app, BTW.
Not in other apps that I’ve tried.

@support
just noting that this problem has a major negative effect on the user experience. I’ve had to stop using my Windows devices in tablet mode, as the lack of ability to search or perform other functions requiring the pop up on screen keyboard is just too annoying to deal with on a regular basis.
Hope this issue can be taken care of in a minor bugfix fairly soon, instead of waiting for a big update.

Thank you for your interest into this issue.

I took a look at our internal tracker today, and I can see that your ticket is still in our development queue. This means our developers are still planning to look at this, but we don’t yet have a timeframe for when that’s going to happen.

Once the ticket has been scheduled and work begins, I’ll have a better sense of timing here. Thanks in advance for your patience!

I’m running Windows 10 build 1903 and also got this problem. It at first seemed to make Roon unusable on my computer (fortunately can still use it on my phone). However I figured out a workaround, other Windows 10 users might appreciate, until the bug is fixed (soon I hope!).

I normally run Roon full screen, but if I shrink the app down to its minimum size (i.e. it takes up about 2/3 of the screen on my 1080p monitor) then the touch keyboard pops up but doesn’t cause the text window to close (and it stays up). With the keyboard up, I can go into its settings menu (settings icon on top left of keyboard) and select a different smaller keyboard (I selected the first option to the right of default). Once I have selected this option, the touch keyboard pops up smaller.

Then I can use Roon full screen, and when I go to enter text, the keyboard pops up, stays on screen, and doesn’t get in the way too much. I can pretty much ignore it. For me that’s a reasonable workaround. I think the touch keyboard will retain the settings (I hope). I can close Roon client and restart it, and the keyboard settings are retained.

Thanks for this. Too bad the Roon guys couldn’t give us the workaround.

When I tried your workaround it worked, but the small keyboard was too small for me. But my screen is higher resolution, and I also found that if I make the Roon window about 90% size, the full size on screen keyboard pops up and works normally. You just have to play with the size of the window till you get the max size that doesn’t cause the popup screen window issue to reappear.

Not having the Roon window 100% size is slightly annoying, but much less so than the popup keyboard issue.

Glad that helped. In my case I don’t even want the keyboard to appear at all. I have a real keyboard (it’s a workstation) and I can’t think of any other software that pops up the onscreen keyboard. I didn’t remember ever even seeing it before. I can see if you are using a tablet you need it. I hope the Roon engineers realize it causes issues even for non-tablet users by popping up the keyboard unnecessarily.

We’ve recently released Roon 1.7 (Build 500) which includes changes that should improve this behavior. Please give it this a try and let us know how it goes!

[Vālence%20Blog%201200x500] Roon Labs is proud to announce the largest project we’ve ever undertaken. After two years of focused design and engineering, we’re unveiling an entirely new technology we call Vālence. Vālence is a system built on a massive new cloud database, which uses machine learning algorithms – designed with our passion for music – to model the many dimensions of relatedness more deeply than ever before. And because you use Roon to explore, collect, and listen to the music you…

Hi-
I actually looked for that in the release notes as soon as I saw the update and while it was installing…
On my two devices it has solved the problem, thanks. Maybe hard to believe, but it was VERY annoying.

@noris Not a solution for me, I’m afraid. The behaviour has changed slightly.

Edit 2: If the Roon window is put into fullscreen mode (F11), then the onscreen keyboard will work as expected. This does mean that the Tablet Taskbar is lost, but I can switch windows and reveal the Taskbar by swiping from the left, so this is an acceptable workaround.

@danny2 / @Joachim_Herbert - Thank you for confirming the issue is resolved on your end.

@Geoff_Coupe - I appreciate the additional feedback here, I have forwarded your remarks to the technical team for a closer look at this behavior.

b) But when I fold the screen either flat or in “tent mode”: behavior returns when Windows is in “Tablet” mode. If I take Windows out of tablet mode but continue to use the touchscreen as I usually would with the screen folded as a tablet, the behavior doesn’t manifest.

Thanks for confirming that this issue still occurs for you in some situations.
I have forwarded your remarks to the technical team and we’ll look into it further.

@support
It’s been over a year. Is this issue any closer to being solved?

Yes, it has been fixed for quite a while now. Don’t know though if the fault was microsofts or roons.

Isn’t fixed for me. I still get the popup keyboard disappearing and jumping in and out when I try and do a search.

In tablet mode this issue appears, in desktop mode it doesn’t.

Is this still the same pattern of the behavior?

We made some changes here a while back which should have helped, can you confirm if you have this setting enabled? 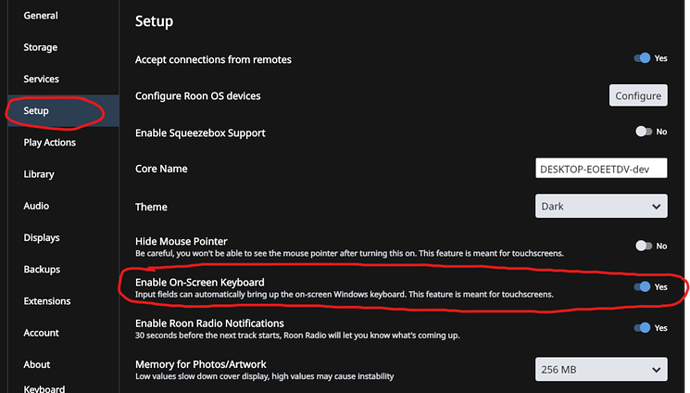