When playing 352 kHz 24 bit flac files on Roon Server using DSP convolution and ASIO output to Chord Qutest I get pops and clicks. If I use WASPI I don’t have those pops and clicks. Convolution files were created using REW with wave files for each sample rate. Processing speed on Roon shows 7.5x. Wondering why WASAPI seems to be working fine while ASIO output is not. No problems with lower sample rate files.

Simple answer might be to just use WASAPI but just wondering why there would be different behavior.

what is the processing speed indicated in the Signal path? is its lower than 1.3X you are not having enough CPU … upsampling/convolution needs a good first cpu…a Celeron is not going to cut it.

you might try to turn in Parallize Sigma Delta in the DSP settings but I think thats only for DSD upsampling. 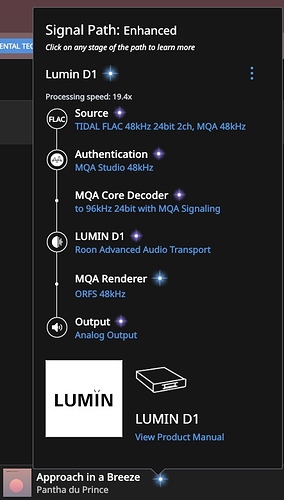 Probably different buffer size between Asio and Wasapi drivers. Not always possible to change that, depends on the Asio drivers and settings software of your interface.

Processing speed when I’m hearing the clicks is about 7.5x. Picture attached. Roon software is all up to latest. I tried using max buffer size but to no avail. I’m happy using WASAPI but wondering what could be different between the two. Does Roon just work a bit better with WASAPI when doing these convolutions or is there different processing that might be covering up a problem in the source file or convolutions? 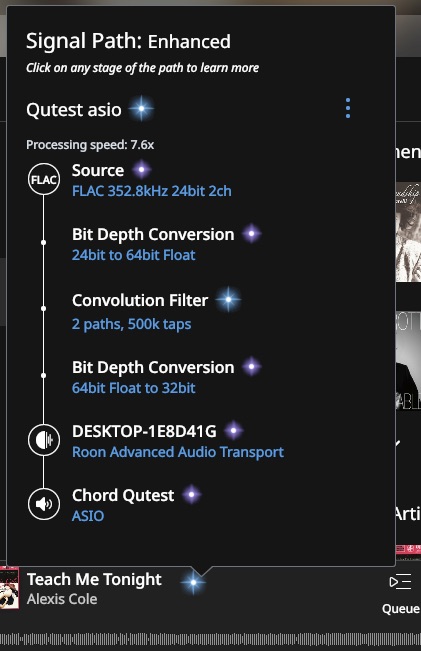 Processing speed is not the same as buffering.
Remember that ASIO was invented for Pro-audio and Musicians in mind. The most important feature being low latency. Latency is not important for just playback but it becomes a important factor when making or editing music. Low latency can only be achieved by keeping the buffers as small as possible. Wasapi was not designed with lowest possible latency in mind. By default it has a larger buffer size than ASIO. Some DAW software allows you to adjust the Wasapi buffer size to decrease latency. Other than buffer issues ASIO and Wasapi should sound the same unless your interface has very specific drivers to fully operate to it’s potential. Ask the manufacturer about it, they should know.

Thanks @Nyquist. I’m using the Chord ASIO driver for Windows. Since there’s no difference I’ll just switch to WASAPI from here on. I’ll lose native DSD playback that I have with the ASIO driver but that kinda went out the window when I added the room correction convolution and had to switch to PCM conversion for DSD. I don’t hear a difference between PCM and native for DSD but there’s clear improvements with room correction.

Is the behavior the same when you don’t have the Convolution filter turned on?

If this behavior only occurs with Convolution turned on, would you mind uploading the filter to Dropbox / Google Drive / Send.firefox.com and provide a link?

The behavior is not the same when I don’t have the Convolution filter turned on. There are no audible clicks or pops using Chord ASIO driver with convolution turned off. I’ll post the filters and the flac file to that box drive. The filters will be the .zip file with all .wav files in that filter set. I don’t know how to figure out which specific filter was used.

We were able to reduce the audio artifacts somewhat by setting the “Max Bits Per Sample” to “24” in Device Setup in Roon.

I recommend sticking with the WASAPI driver as it does not exhibit these issues while also delivering bit-perfect data to your DAC.

@john
Thanks for researching this. Just to confirm my understanding of your summary. The problem is not with the media player so it’s not related to my Roon Server computer processing speed (Chord DAC is connected by USB to the Roon Server in my configuration).

You and the Roon team have a terrific product and your support is outstanding. Sounds like I’ll stick to WASAPI from here. I don’t see any downside to WASAPI as I’ve been using more of the Roon DSP features. The ASIO drive lets me do native DSD but with all of the DSP in Roon happening at 64 bit float I can’t imagine there’s any sonic improvement, probably a reduction in fidelity, by converting back to DSD.