First up the two discs were not collated and one was incorrectly identified as featuring Sutherland. That was edited so the correct cover featuring Kirby (like the other one) featured and the two were edited to merge.
Lo and behold, the previous incorrect cover reappeared!!
That was again corrected BUT the tracks were not labelled. The same thing had occurred with Sooloos (although it got one of the two album tracks right) so I guess the same database is being used.
A bit frustrating because some time in the future I’ll have to re-edit all the tracks on both albums as I had already done with Sooloos. Disappointing that did not port through to Roon.
I assume editing tracks will appear with 1.3 but I hope the same thing will not occur as with the covers - after editing it will flip back to the current labelling? Or maybe the database will improve so that track editing is not required?

Would it be an idea to have a spot here where we could notify about albums like this so Roon knows which ones are troublesome?

@JOHN_COULSON Have you tried re-identifying the album and selecting a different set of metadata?

Strange. On the right it does identify the tracks correctly but when I save it reverts to the other dumb labelling.
Rescan the track does nothing either.

“On the right” are your own file tag track titles, I’m guessing.

Ah, you mean the ones I edited in Sooloos? Could be, but I cannot see how to embed them in Roon!! Rescan just repeats the earlier scenario without any change. Frustrating!!

Ahah, now got it by accepting “None of these Look Right” etc. Oddly I tried to repeat the exercise but got nowhere. Anyway, tracks now correctly labelled.

Ahah, now got it by accepting “None of these Look Right” etc.

Hey John – just keep in mind that by choosing “none of these look right” you’ll be passing up any extended metadata that Roon may have about this album.

Have you tried paging through the album versions in the Identify screen? If we have multiple versions of the album in our database, you’ll see little left-right arrows that will let you pick the best match if we didn’t find it automatically. 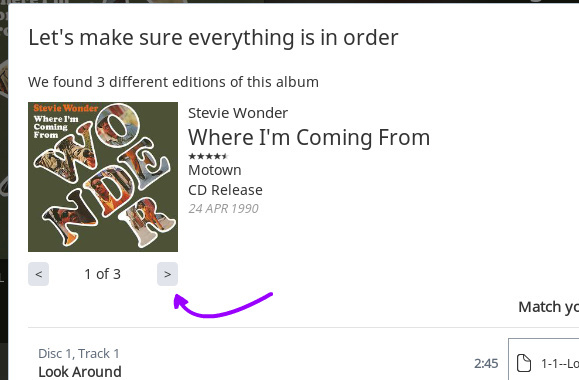 To be clear, you don’t need to change the album identification to edit track titles.

You can still match match the album to Roon’s database (retrieving credits, information about classical works, detailed release information, etc) and just edit the track titles from the album’s Metadata Preference tab, or by selecting tracks and editing them directly.

Let us know if you need more information about any of that. Thanks!

@JOHN_COULSON I get a straightforward identification of this album with a TiVo review. If you are not getting that, your file tags or file structure is wrong.

@joel I think I should send this over. The track metadata is screwy. This was already reported a year ago here: Hogwood AAM Handel Messiah

Please let me know if you need more info. 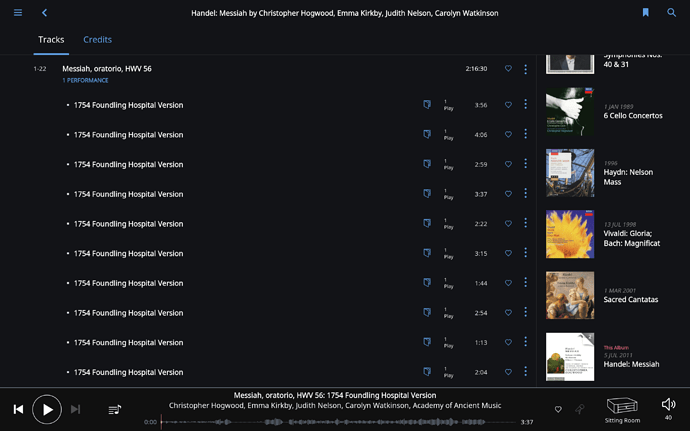