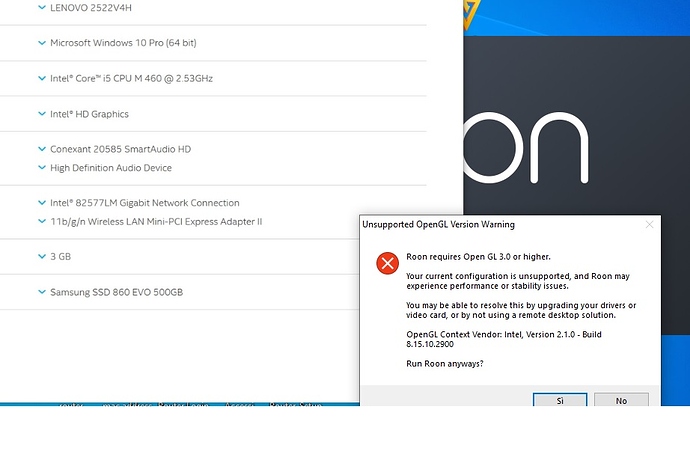 Nucleus is connected via Ethernet to the modem/router

Since few weeks (maybe after the last upgrade of the roon version), when I open Roon from my PC I receive the error message
“Roon requires Open GL 3.0 or higher …” and the request for installing new driver but my drivers are already uptodate.
What can I do?
I have read some thread about Open gl 3.0 but noone helped me to approch and solve the problem.

Roon is working but, for example, if I try to export a playlist to excel I only get the first title

Please let me know
many thanks
best
manuel

Open GL 3.0 is required to run Roon and if your device’s GPU doesn’t support it then you will receive this message, and you might run into other issues as well. Is the playlist export issue that only issue you’re seeing? Can you share more details about this? 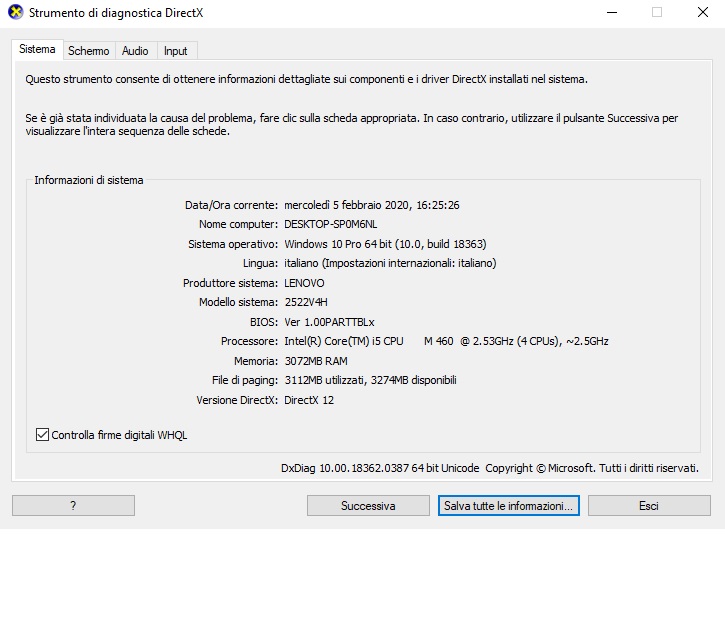 And yes, I confirm that the drivers are uptodate 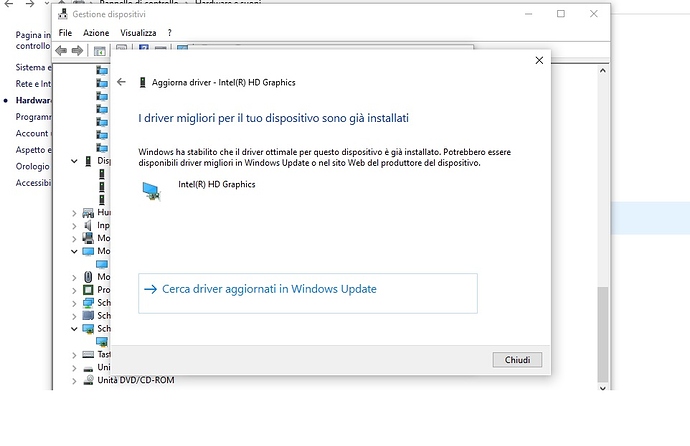 I run roon since more than one year with the same PC and I have never had such kind of problem. Maybe after your last upgrade … I don’t know.

At the moment the export playlist is the first and only problem but I normally use my Samsung S7 as remote so the PC is not used strongly.

No export playlist by my smartphone so I tried with the PC and the problem appeared.
I asked to my friend to try an export by his PC with windows 10 and the navigation path was a bit different and the result ok.

Can you share a screenshot of what you’re seeing when you export playlists?>

Dylan, thank you very much for your interest. 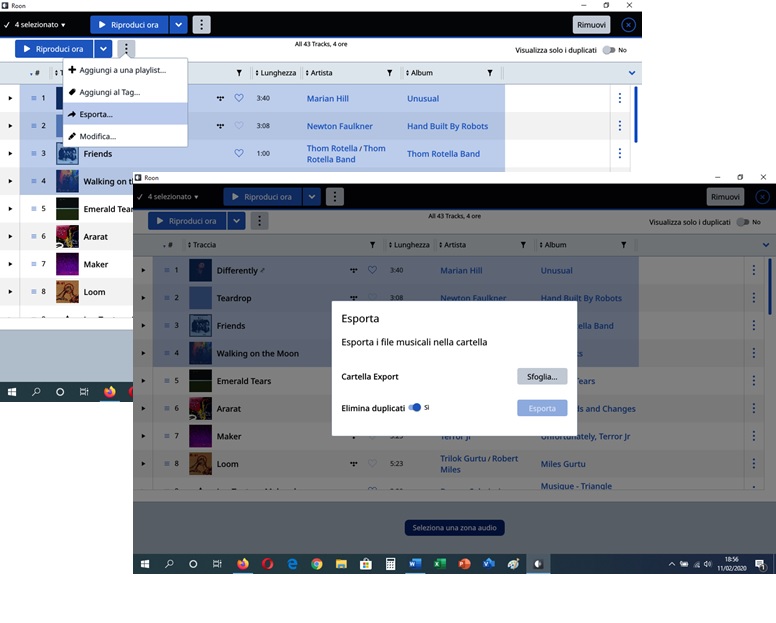 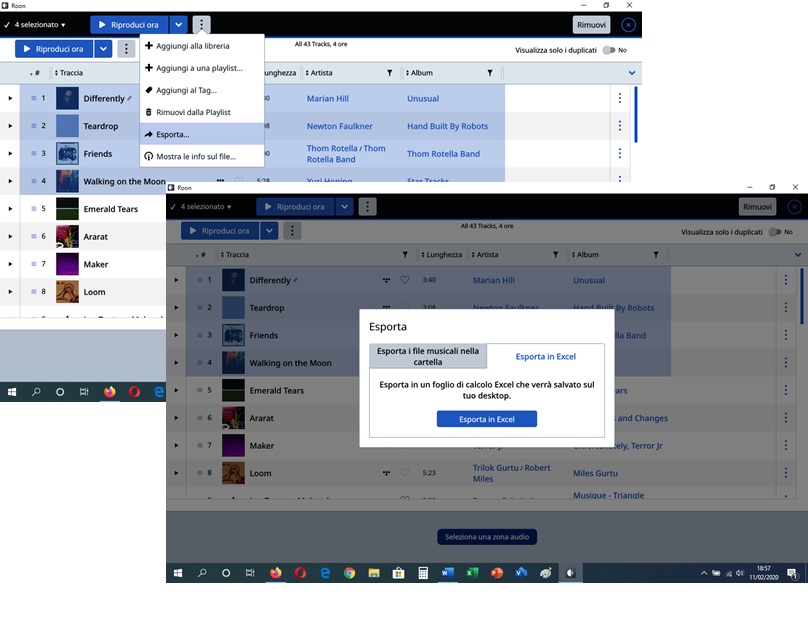 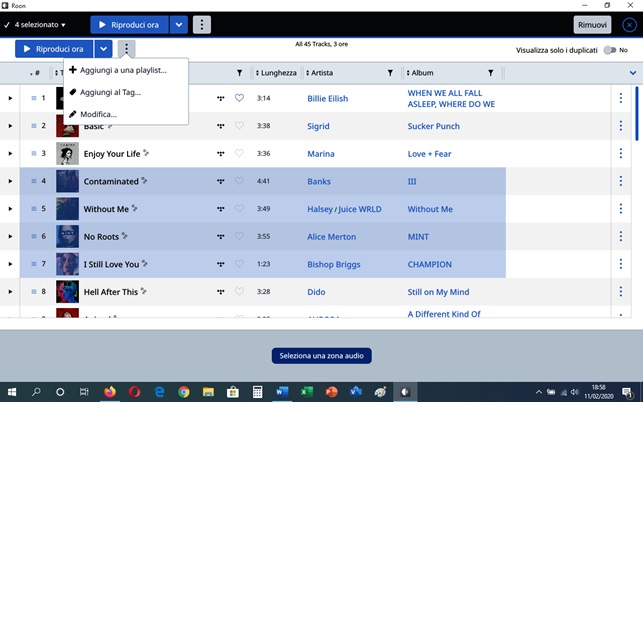 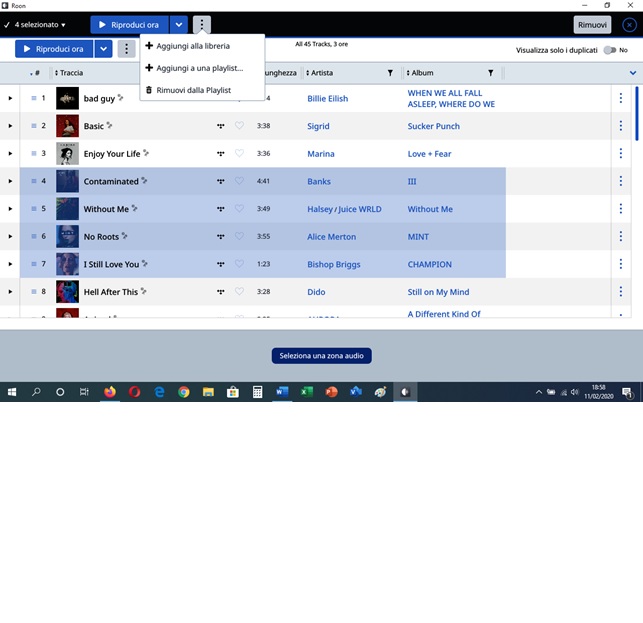 Please, note that I’m tryng to export from 2 different playlist. I don’t know which is the difference.
And I add that there is another incorrect behavior that I’m no more able to replicate.
I get the export function with only the excel option and I obtain the xls but it contains only the first row with the first title selected

Speed_racer …I tried … installed the sw and run it but with no results.
thanks

The Export to File function in Roon is for copying music files in your Library to another location. These music files can come from CDs that you have ripped, or albums that you have bought as downloads, and that have been copied into the Storage locations defined in your Roon Core.

Albums and Tracks from TIDAL that you have added to your Library do not exist as local files in your Library Storage. It is only that the information about the albums and tracks has been added to Roon’s database so that they are included in your Library.

You seem to be trying to Export files from Playlists that are a mixture of local files and TIDAL tracks. Only the local files will end up being copied into your Export location. TIDAL tracks will be skipped, because they are only ever streamed, never held locally.

And if you choose a list of files in a Playlist that are only TIDAL files, then you will only get the option to export to an Excel spreadsheet - never to a storage location.

And the reason that you are not seeing the “Export…” function for your second playlist is, I think, because you have added those tracks to your Playlist directly from TIDAL - so they have never been added to your Library. The Export function only works on items in your library.

Here’s an example of what I mean. I first use Roon to look for Alice Merton’s MINT album: 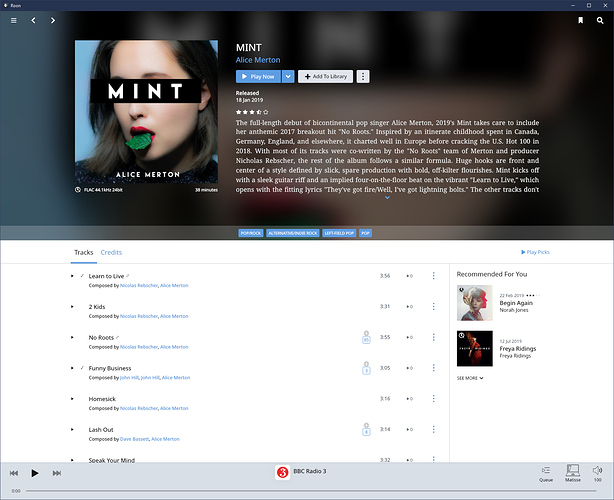 I haven’t added it into my Roon library, but I can already pick tracks from this Qobuz album (I have Qobuz, not TIDAL, but the same situation applies) and make a playlist: 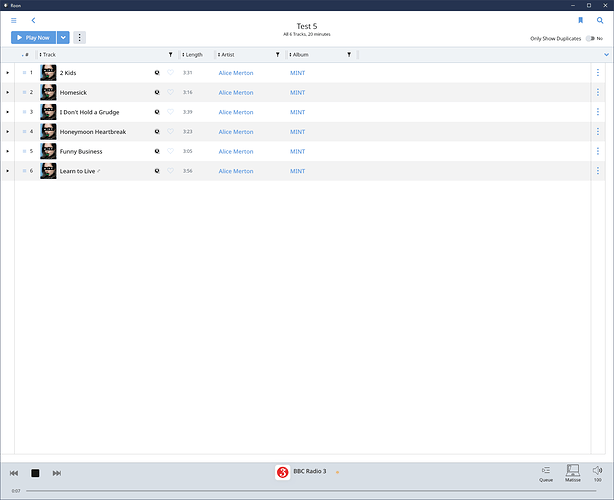 However, if I select tracks from this playlist and try to export them, I don’t see the Export menu option (but I do see an Add to Library option) - because these tracks are not in my Library: 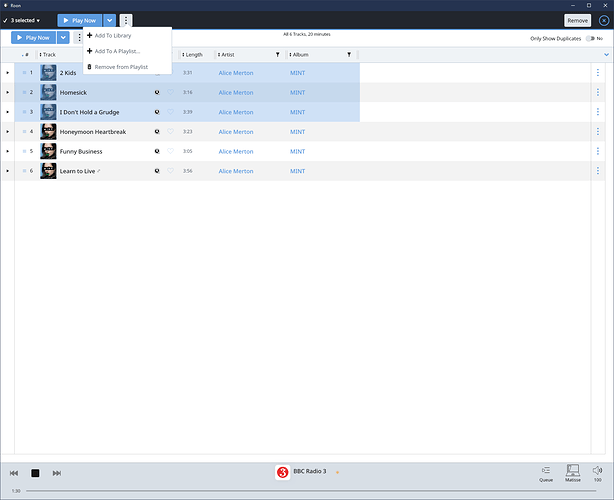 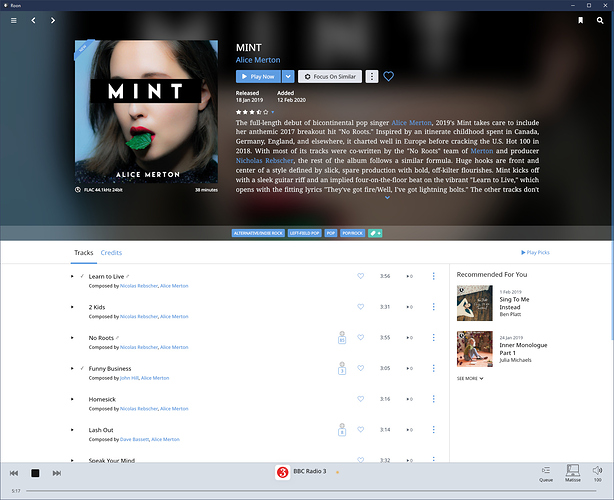 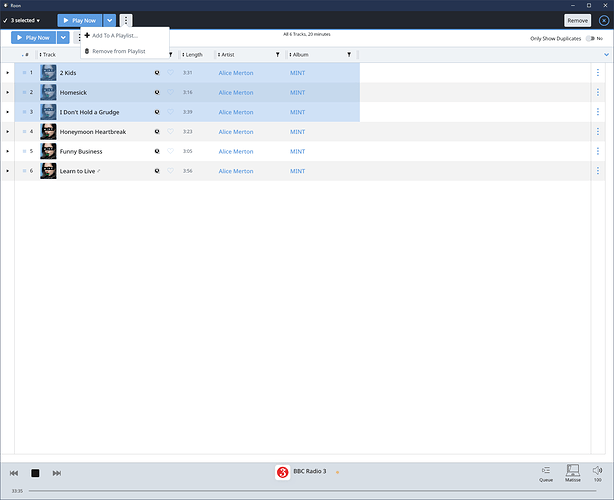 Instead, I have to create a version of the Playlist that contains tracks from my Library. This can be Exported to Excel: 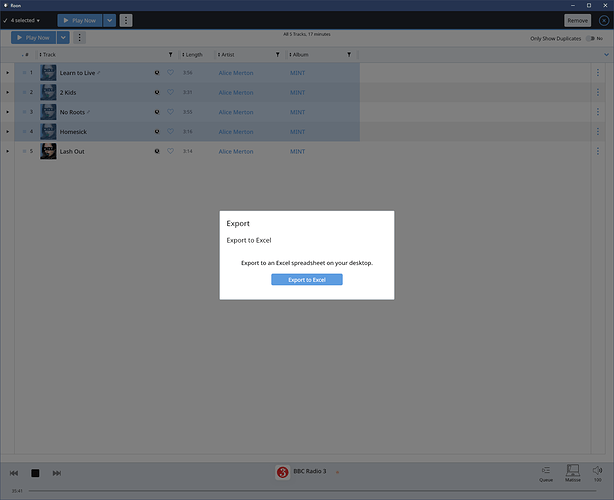 And I get all the tracks listed, not just the first one: 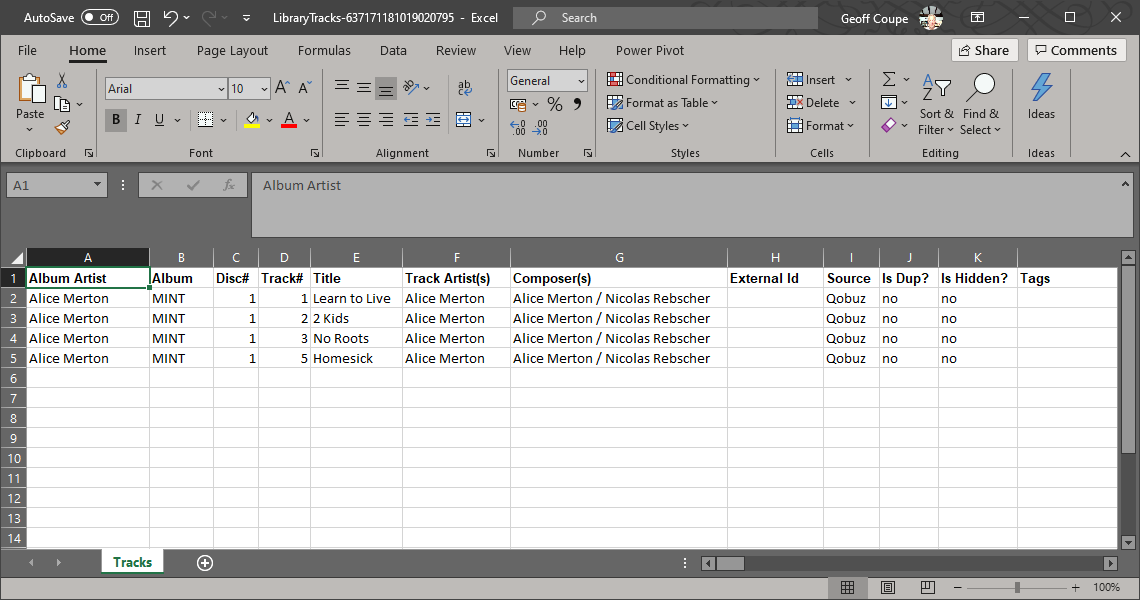 I suspect, in your case, you had a mixture of tracks in your Playlist, with only the first one being actually in your Library, the rest being added directly from TIDAL without being added into your Library.

mmmhhhhh … let me underline 2 important points:
1 - my “main” issue is to export playlist in an Excel format.
2 - both my playlists are made with TIDAL tracks

Wow, you’re right, … now I have understood.
Thank you very much
best
manuel
ps
let me add that in case of tidal/qobuz tracks at least the xls export should have been adopted …