@support
I recently purchased a Corei5 NUC and installed ROCK with a lifetime Roon license. I previously ran my library through an Auralic Altair, from a NAS via ethernet and using Lightning Server / LightningDS.
My library is over 25,000 albums in a variety of file formats. When scanning my library through Roon, I ended up with quite a few skipped files. After some further manipulation (adding specific folders from the NAS rather than the root Directory ‘music’), I am still left with approx. 1000 albums in skipped files. While I can live with some of those not being picked up, there are about 25 albums with DFF files which I would like to include in my Roon library. I have read all the posts I could find about issues with skipped files and file types.
I even converted one of the albums into DSF files. It still fails to get recognized by Roon.
I am open to further suggestions on how to recover these files (which still play fine when using the Altair/Lightningserver combo).

Can you share a screenshot of what you see in Skipped Albums?

What is the reason provided for these being skipped?

I’ll work on a screen shot later (writing this on a laptop while the screenshot has to come from my Ipad). The message is ‘Audio Stream Format not supported’ on all of them.

Considering the above is the only information I can see in the skipped files list, is there any other info I can provide for you, to troubleshoot this further please? 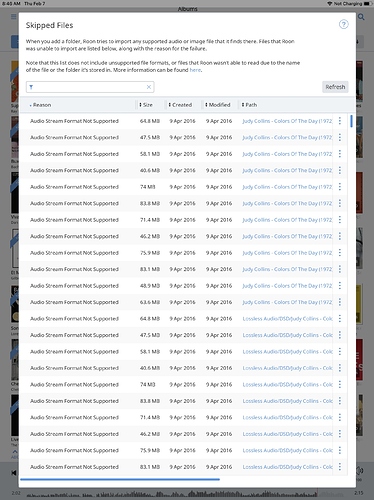 So nobody in support has a way of troubleshooting why these files are skipped by Roon, while they play fine in LightningServer / Lightning DS or MinimServer / Lumin ?

Can you click on one of the files to show it’s full path and file extension. 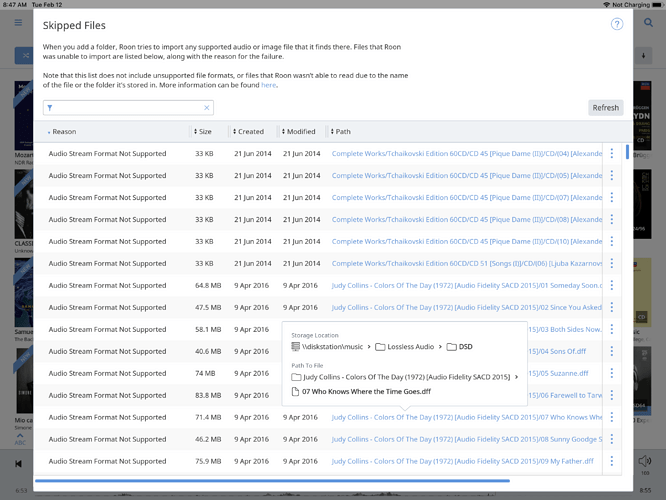 Roon has problems with some dff files.
There are a few threads on the forum you can read for ideas for example below. Converting to dsf seems to be the concensus. Flagging @support

I already know that, thank you. I have taken some of these same files and converted them to DSF. The problem remains exactly the same…

Support will probably ask you to send them a sample then. You might want to add details such as source of the original files, convertion tools etc to stop wasting time asking you questions.

Thank you . In the meantime, I continued futzing with some of the files and it seems there may be something else going on.
I just tried converting 3 more of the albums to DSF and the conversion failed on all 3 saying these were not standard DFF files and were possibly edited using JRiver (to be honest I don’t remember their exact origin but I did use JRiver a long time ago). As it’s only 20 or so albums, I can live with using the LightningDS for them. I’ll just have to stick with Auralic hardware in future upgrades

If there are only 20 or so, I would suggest to re-rip them.