I’m really upset with the recent changes with how Roon deals with queues.

Most of the time the queue is built up of masses of albums I didn’t finish playing a while ago. Previously, adding to the queue cleared the old stuff.

If I choose “add next”, it will stop playing the current track and go straight to the new one. This should be “play now”

If I choose “add to queue” it doesn’t add to the end of the queue - no, that would make too much sense - instead it adds it as next

Can you confirm the core and the remote (iPad?) you are using to access it are both running the latest Roon version 1.4 build 294, your symptoms could be caused by the remote not having the latest version, certainly I do not have the problems you state.

Yes, latest on core and iphone and ipad. I have recently reinstalled roon core from scratch. I had the same issue before the rebuild anyway

Most of the time the queue is built up of masses of albums I didn’t finish playing a while ago. Previously, adding to the queue cleared the old stuff.

…which many complained about, hence the changes.

Some of the Play actions are now customisable, in Settings.

I like that the history is there in the queue, but i often find that old stuff is in the queue for the future not in the past 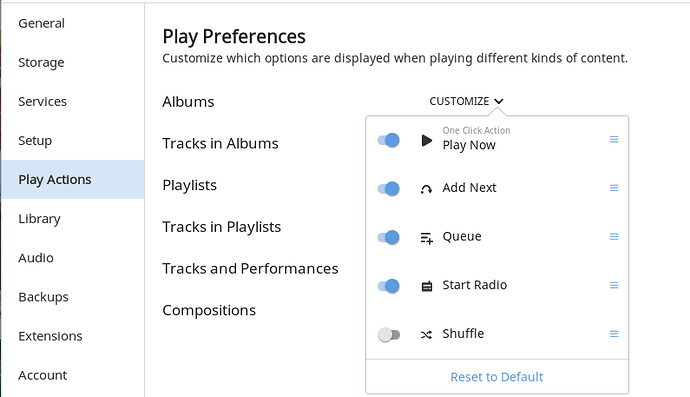 Thanks but this is not the issue

Perhaps this needs to be moved to Support as a series of bugs then, if I’m alone / unusual in experiencing these issues.

@Pete What version of iOS is running on your iPad?

That’s the problem. The latest version of the Roon iOS app requires iOS 11; you are still on the old app.

OK, I’ve now installed ios 11 and that’s now fixed. Thanks. Was there any message to say that the latest core wasn’t compatible with older ios apps? If so, I totally missed it. Thanks anyway

Yeah, it was in the release notes. Scroll down to the last comment in the “Playback on iOS” section.

This topic was automatically closed after 27 hours. New replies are no longer allowed.