sometimes the progress bar just has a big circle where the current position is and it is a straight line, Sometimes it is a vertical red line and it shows the dynamic range.

AND Roon Radio keeps picking different versions of the same song. I started with St James infirmary and it kept picking another version of the song, sometimes stops at the beginning and sometimes not…

in other words, Roon Radio has lost its mind… driving me nuts

so now it played the songs you see in the queue, advanced to Wonderall as shown, the little dancing bar graph next to Wonderall in the queue is moving like it is playing, but the bar graph has stopped at the beginning of the song and it is not playing. If I select the song Wonderall by Oasis from the lower right and hit “Play Now” it goes to the Ryan Adams version of the song, but does not play until I hit “Play now” a second time. Then the queue fills up with 50 other versions of Wonderall. It finishes the Ryan Adams version, moves to the Brad Mehldau version, but once again stops at the beginning. Hitting pause/play does not do anything but if I slide the bar over a bit it starts to play. Then, instead of the next version of Wonderall in the queue it insteads goes to Smells like Teen Spirit by Nirvana, but also stops at the beginning until I slide the marker over a bit, and so on. 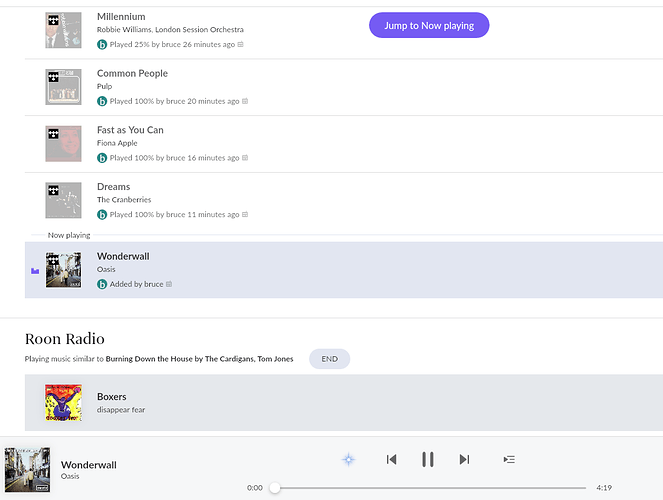 It is an issue when the rate of the next song is different than the last. I don’t know if Roon isn’t telling Euphony that the rate changed or Euphont doesn’t respond, but when I check the signal path I see that Roon has changed the rate but the last entry still shows the previous rep rate so it stops