I have been trying Roon for a week now and I am allready at the point of seriously considering a lifetime account, needless to say I think it’s a great player.

There are a couple of minor things so far however.

First of all, after trying the automatic Tidal recomendation Roon imported about 400 albums from Tidal. There was no way to make this undone, I had to manually delete every item from the database.

In this process of deleting I also deleted some of my own music files. These files are not deleted from the database but actually deleted from disc. I think this is a very strange behaviour. Mistakes are easilly made at this point. Personally I would like that any audio player could not have any deleting / moving access to any of the files on the harddrive, or at least not in an easy way.

Second point, something not many players do right, is various artists albums. In fact, only MP3Toys, my favourite player up till now did this right. In MP3Toys I could call all files in one particular directory an “Album” if I wanted, and in fact I wanted that really badly because most players don’t recognize various artists album in the right way. Some sort of function would be very nice in Roon as welll. I have now a lot of single track albums in Roon which are in reality one various artist album. Maybe manual retagging wil help but then I would have to know how Roon recognizes a various artists album.

I have deleted some albums and duplicated tracks from within albums recently and found Roon clearly warned me that it would remove them from the hard drive. I can’t think how much more warning they can give.
The problem is, when you first get Roon, a lot is going on to get used to.
Sympathies.

First of all, after trying the automatic Tidal recomendation Ronn imported about 400 albums from Tidal. There was no way to make this undone, I had to manually delete every item from the database.

The Focus feature is your friend - you can use it to only show Tidal albums (using the format inspector), and then select them (if on Windows, it’s the traditional CTRL-A salute), and with a press of the Delete key - poof, they’re gone.

[quote=“Sjef_van_de_Ven, post:1, topic:16157”]
Mistakes are easilly made at this point. Personally I would like that any audio player could not have any deleting / moving access to any of the files on the harddrive, or at least not in an easy way.
[/quote]I’m an advocate that Roon implements “Trash Can” folder within each watched folder with an ‘undo’ feature i.e. it moves files to that and never deletes anything.

I’ve always found it strange that the only edit Roon would allow you to do to meta data was to delete it!

Why have the option at all?

Yes, Roon does warn upon deleting. However, removing Tidal entries from your databse is also called deleting instead of removing from databse. So here we have two differnetn actions wich are called the same. One only removes items from the library, the other actually deletes albums from harddisk. That’s confusing. I tied removing 400 itmes from Tidal but also selected some of my own albums and deleted them. Again, an audioplayer should not have acces to deleting anything. It should have a link to the actual file so you can delete / move it in the file browser of the OS.

[quote=“Sjef_van_de_Ven, post:6, topic:16157”]
It should have a link to the actual file so you can delete / move it in the file browser of the OS.
[/quote]Probably going a bit off topic now but this one exists now:

album browser, right click (long press) on a track to select it and then click the track info icon. 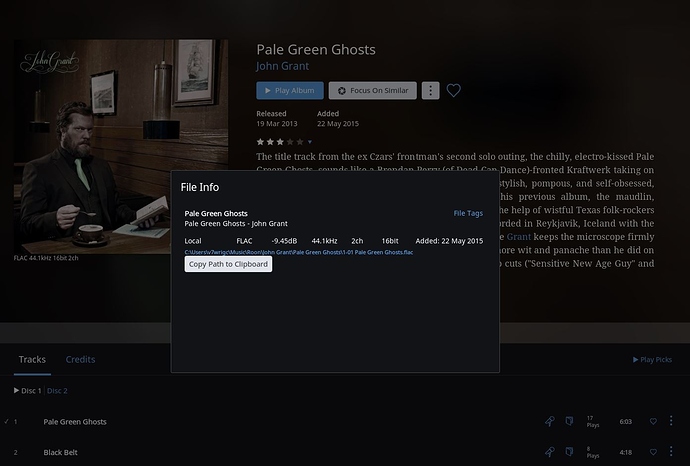 Hi guys, not sure if this was already addressed but i would like to know if there is a way to prevent the ‘‘accidentally’’ cancelation of albums or single tracks from my library.
Basically i’m specially worried if a will give the tablet to browse/controlling the library to some un-exeperienced person (ex. my gf or mother?

) and they delete something by mistake.
Is there any way to avoid this? Like a password protection or an option to never delete stuff from the drive.

I think this is very important feature.

Yes, it has been discussed and I’ve moved your post into this Feature Request topic.

I too have the same concerns and made some suggestions above.

I have to say I’ve not understood why Roon will delete any files. There are better file management applications than Roon – Roon says this themselves – so I’m not sure why the one thing Roon will do in terms of file management is the most risky. It would be enough for Roon to tell a user where a file is so that the user can delete something manually if required.

Since Roon supports multiple user profiles, would it be possible to be able to have a simplified UI for the ordinary user? And by simplified, I mean no edit buttons or file info buttons that reveal detailed technical info. I suspect in many families there will be one person who acts as the curator/librarian of the collection. That person needs to have full access to metadata editing and detailed technical info. The other family members might just want to browse/play music, and be glad of fewer …

Is it possible to add additional password protection to prevent albums being deleted from library & its physical location?

I am sharing the Roon remote with my family, sometimes worrying if any of my album will be deleted by mistake.

I know this does not answer your question, but I would suggest having a backup of your files to prevent loosing them.
I, for instance, have my files backed up in three places, A NAS (network attached storage), an internal back-up drive that is not on computer running my core, and an external USB hard drive. This is in addition to the files that are in use on the computer running the core ROON server (a NUC running ROCK). So a total of four copies of the files.

You don’t need all those backups, but it does not hurt to go a little overboard where file backup is concerned…
It would at least give some peace of mind that if someone does delete files you can restore them.

Thanks for your reply! Yes, backing up is always important, actually I enabled the recycle service in my NAS so I have a chance to bring deleted files back.

If a password protection in Roon is not possible in short run, I would consider assign read only permission to Roon service, however, will I have to re-scan the NAS again if I modify the NAS login information in the Storage settings?

The user profiles feature needs to be expanded to include allowing deletions only by certain users. Passwording the users could be part of that.

It would be quite easy to make the whole thing cumbersome…

Yes, should be easy for Roon to improve this. I am worrying that anyone who can access my wifi can easily manage my Roon Core with his own iPad/iPhone, there is no password to avoid unrecognised remote device connection.

There is a thread on this already

This topic is also pertinent:

My main entertaining space has a nice system with Roon running to a 55 inch tv. Currently, I’d love to bring out the keyboard and mouse and let my guests explore (and get hooked) on Roon. I don’t because I don’t want them to have access to the editing (or other) capabilities. I would like there to be a “guest” or party profile which be default has all the editing, exporting, setup functions turned off. That way I can let my guests browse through Roon without me hovering and worrying that…

Additional security features have been requested a few times, and it’s something we’re considering, but it’s a reasonably big project and obviously if we’re going to do it we have to get it perfect.

In the mean time, remember that Roon doesn’t touch or modify your files in any way except when making deletes, so if you’re using a NAS you can always just give Roon read access, instead of read/write.