I just started to have the same problem. The Bridge II in the DS no longer showing up. (USB is working). Actually for time to time for short period the Bridge II shows up, but disappears quickly. Rebooted router and DS as well the server several times still have problem. I was using the Bridge II for over 4 months with no issues. The problem just started to happen in the past few days. Any chance that the new release Roon release is causing problem?

After multiple reboots of the server/router/DS I am back for now.

In the past few days I’ve been getting very unreliable connection to DS Bridge II. I have been using it for several months and had no issues. Two days ago I had to power down the server (and the router and when it came back the Bridge II was not recognized, more accurately it showed up for few seconds, shortly played music and disappeared. After multiple reboots router/server/DS the connection stabilized and played music for several hours. (see PS Audio DS+bridge can’t be found).

There was a subsequent power outage and having now the same problem except this time cannot make the connection stable even rebooting the the devices (in different sequences) multiple times.

The server is a Mac Mini connected with ethernet cables to any Apple Extreme Router to which the DS connected by wires, Wifi is off. (There is a second Extreme router connected in bridge mode to the first router with wires - the second one has Wifi enabled - the server is not connected to it)

Please advise it has been aggravating.

At this point I totally lost the access to Bridge II.

Hi @Janos_Farkas ----- Thank you for the report and sharing your feedback with us. Apologies for the slow response.

To help aide in my evaluation of this behavior you’re reporting to us, may I very kindly ask you to please verify the following information:

When I to ping Bridge II and get intermittent results meaning that I get response for 10-30s than no response to ping for about same amount of time then responds again to ping and this alternates. I tried to run ping on two computers simultaneously and getting the same behavior however the responding and not responding cycles are not synched.

I believe my firmwares are up-to-date.

Hi @Janos_Farkas — Thank you for giving the test a shot, these results indicate to me that there is something occurring with the communication across your network. I see from one of your previous posts you mentioned the following in regard to the topology of your network:

“The server is a Mac Mini connected with ethernet cables to any Apple Extreme Router to which the DS connected by wires, Wifi is off. (There is a second Extreme router connected in bridge mode to the first router with wires - the second one has Wifi enabled - the server is not connected to it)”

Can you confirm that this is all the networking hardware you are currently implementing? If there are indeed more “links” in the chain of communication, can you please describe where they are located and provide insight into the make/model of those devices.

Furthermore, I understand that you have power cycled your equipment a few times during your troubleshooting of this issue. Can you verify that the setting you’ve assigned to your Apple Extreme routers are still in place? In other words is the Apple Extreme that has the DS connected to it still have Wifi turned off and the second Apple Extreme is still set in bridge mode?

Eric, the second Apple Extreme (which is actually a time capsule) has a 5 port switch attached to with ethernet cables. The switch has a Philips and a Lutron home automation device connected to it. The second Apple Extreme also provides the internet through WiFI to several devices in including a MacBook Pro, iPhone, iPad all three has Roon installed on it. In addition there are another half dozen of devices are connected through WiFi.

My MacBook Pro used to host the Roon Core before migrated to Mac Mini, which was running fine until this week.

I verified that the setting on the two Extreme units are correct including WiFi off on the one which has the Roon Core connected to it and Bridge mode on the second with WiFi. Also called Apple care to confirm that my setup is correct.

Eric, on more thing which may be useful: The ping from the Mac Mini to the MB Pro is stable. The core sees the MB Pro as a networked device (see below) and can play music just fine. 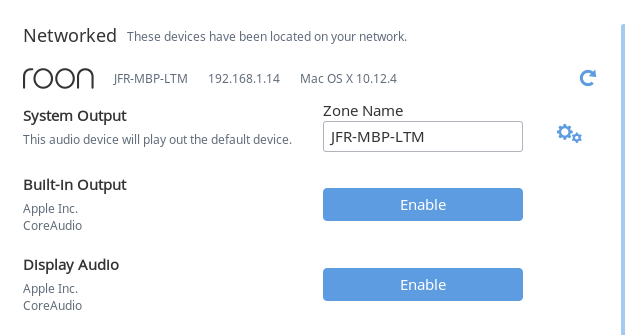 I tried another thing to check the network. I hooked up an Apple TV (3) connected with ethernet cable to the Airport Extreme (the one the core is connected to). The core is recognizing the device and plays music fine (actually plugged to the optical input of the DS). Also tried the same Apple TV through WiFi connection picking up the signal from the second Extreme. That is working fine also.

Hi @Janos_Farkas ----- Thank you for touching base with me and taking the time to answer my questions, both are very appreciated!

I want to take a small step back here for a moment to make sure that I have all of your devices and the chain of communication mapped out correctly in my head. As it currently stands your setup is as follows:

Can you provide me with the make/model of the switch being implemented in the chain of communication as well as some insight into the Philips /Lutron devices? Furthermore, can you verify that there are not active firewalls or antivirus applications in your setup?

Lastly, can you confirm if the the DS works with DLNA?

From the play Store (Android): Download and install mConnect or mControl by Converse digital. Then in the application hit the Play to tab at the bottom. Then if your bridge shows up select it. Then press the player tab, and press the gear at the upper left and it will give you device information. If you have a uPnp server on you network, hit the browser tab. Then select a song and it should play on your DAC.

Go to the Apple store (IOS) : Download and install mConnect or mControl by Converse digital. Then in the application hit the Play to tab at the bottom. Then if your bridge shows up select it. Then press the player tab, and press the gear at the upper left and it will give you device information. If you have a uPnp server on you network, hit the browser tab. Then select a song and it should play on your DAC.

Eric, your description of my network is correct. The switch is http://www.dlink.com/uk/en/products/go-sw-5g-5-port-gigabit-desktop-switch, the Philips device described here http://www2.meethue.com/en-us/productdetail/philips-hue-bridge and the Lutron device is Model:L-BDGPRO2-XX,you can see it at http://www.casetawireless.com/Pages/ProProducts.aspx

I tried one more thing. I have an IQaudio DAC what I connected to both the Apple Extreme and Apple Time Capsule through wires. Roon recognized it in both scenarios and plays music fine.

Another piece of information: a few months ago when I started to use the DS I pinged the Bridge fine. Did not see the dropouts I see now.

I’ve seen a few issues reported both here and in the PSA forums … they usually result in a replacement from PSA - maybe with a report to PSA to get their support people onto it.

Spent a lot of time with troubleshooting and I believe have a handle on the problem. What I’ve learned could be useful for you so created this summary below:

Resetting the DHCP server on the Apple Extreme restored the the connection to the Bridge and was able to play music for a while. It was not clear why only the Bridge has a problem while the other network devices (IQAudiO and AppleTV) were working fine. So I called Apple Care if they could give any insights. I was told that the Time Capsule should be doing the routing and my configuration (Extreme doing the routing and Time Capsule in bridge mode is not supported by Apple.

Next step was to make the Time Capsule as a router and for making troubleshooting easier did not connect the Extreme. After making these changes lost the connection again to the Bridge and resetting the DHCP on the time capsule did not fix the problem. Have tried a different internal IP range 10.0.xx.yy from 192.168.xx.yy and noticed that the bridge was not responding, on the display still the IP in the 192.168.xx.yy range was showing up, In the mean time the network connection icon was green. This was was obviously wrong. Power cycling the DS did not help. I tried both hard and factory reset on the Time Capsule with no luck. What fixed the problem was disabling/reenabling the DHCP on the DS.

At last, I hooked up the the Extreme (after doing a factory reset) and turned off the Time Capsule’s WiFI (which does cause quite a bit of undesirable grain and harshness). During the process lost the connection to the bridge again, but this time power cycling of the DS brought it back to life.

In summary I believe there is a problem in the bridge’s DHCP module with the firmware I am using (2.9.14). Keep in mind that my other network devices did not have any problems. I am providing the link of this thread to PS Audio.

Hi @Janos_Farkas ---- Thank you for the follow up! Glad to hear you’ve made some progress here! Please let us know what PS audio says.

Also, just to mention, we’ve heard of many many issues with the Apple routers, especially the Time Capsule.

if they’re working for you, that’s great (and it sounds like you’re pretty close now), but just to share our experiences, these devices have definitely been problematic for a number of users, and with Apple phasing them out as well my recommendation in general would be to steer clear.

I had the same problem using the Apple Time Capsule as a router and using DHCP to automatically assign an IP address to the Bridge II card on the DS Sr. The connection was fragile, and was easily lost, requiring rebooting.

I disabled DHCP automatic IP address assignment from the Bridge II and used a Static IP address. I removed the Apple Time Capsule from the Network and replaced it with a simple powered Ethernet Switch. (Netgear GS108).

It works fine now, the connection is stable, Roon is able to immediately find the Directstream DAC with Bridge II and it sounds great, particularly with Tidal Masters with MQA.

I have added the Apple Time Capsule back in the network, but connected through the Netgear Ethernet Switch, so that it is only used as a backup drive with the Apple Time Machine software, and as a WIFI hotspot, but not as a router for the DS Sr.