I have to say the performance is fine, no delay or lag anywhere, I can search for albums/artists instantly and their metadata/pretty graphics all show up instantly.

Will it get slow with the more endpoint/outputs I have? Or maybe with more music?

I don’t really intend on having multiple users, so only one interface.

To my understanding SSD benefits mainly for Roon database operations, so if it works fine for you now it should continue even with more zones.
I was running Roon on QNAP TS-869PRO (quite old Intel Atom) with 3GB RAM and all was quite fine (tolerable for me) except search, which took like 10-15 seconds to provide output

After I moved Roon to i7 NUC with NVME SSD it’s instant for any operation (except Roon start or database reindexing / metadata rescanning). I have around 7k albums though…

Will it get slow with the more endpoint/outputs I have? Or maybe with more music?

Yes, if there is more than one stream playing at a time, Roon dedicates a core to each for processing.

Yes, the more music, the larger the database that needs to be accessed.

Also, keep in mind, the more DSP you apply the more CPU horsepower you will need. That is why there is a Processing Speed shown in the Signal Path when DSP is on, to let you know when you are maxing out the processing.

I don’t really intend on having multiple users, so only one interface.

I can only have one user, but, if I want to have the music going in multiple areas of the house, like say for a party, each endpoint that is streamed to increases the horsepower need.

As for the Thread Title, I would say, that if it is working for you then do not worry about it. If you get to the point that the interface is slowing down then think about updating.

You only need one ssd in the NAS not all the drives. It will improve searches but the limit will be met sooner or later for the processor capabilities and you might want to move to ROCK on a NUC at that point and perhaps use the same ssd in the NUC as first step is budget is tight, but going nvme ssd is the fasted. Backup your database before you jump hardware tho.

I don’t see that happening very soon. Your QNAP is already equipped with an i3 processor and within the recommendations. If the interface is currently snappy on a spinning HDD, I guess your library is not huge.
In case, you’ll need more CPU power in the future, you could also just upgrade the cpu of your QNAP and put an i7 in there (if you feel comfortable doing it or find someone who feels confident with it).

Yeah, I upgraded the CPU and memory on my Netgear ReadyNAS Pro. Pretty easy.

My point was as ones library grows … (Tidal content will add to the library size too) you might run out of puff with spinning media for the database. 10-15 second searches would drive me nuts. DSP processing is going to be your biggest issue without CPU grunt.

Hi Rugby, which ReadyNas did you upgrade? Along with my Qnap, I also have a “ReadyNAS NVX Business Edition” which I’d never considered upgrading, I wonder if it’s do-able?

@wizardofoz: I agree with you. Your sentence (that I quoted) just seemed a little too overgeneralised regarding the cpu power to me. The required cpu power depends on the audio and dsp setup, library size and number of zones. For sure, not everybody will have that big sized libraries or use these features in their full extent and will never hit the cpu limit.
Especially in the context here (maybe unintentionally, or maybe I got I wrong) it felt like a bit of scaremongering, when the original topic was about the requirement of a ssd (even though RoonServer felt already fast and responsive on a spinning drive).

I had the ReadyNas Pro Pioneer edition which was the next line up from the NVX. Basically, the Pro Business version for home use, which included iSCSI functionality. My NAS CPU was a Core2Duo, socket 775, (which I suspect yours will be as well, but the only way to check is to look); so, I replaced it with a spare higher rated Core2Duo I had lying around and also Upped the RAM, worked fine. If you are comfortable with upgrading computer systems, you should give it a try.

Whilst I’m sure that dev team will make changes that affect efficiency of RAM usage, is it not likely that as features are added and libraries grow that RAM usage will increase?

Can anyone of the dev team outline some of the thoughts / plans?

Has anyone experimented with adding an M2 expansion card to their QNAP? 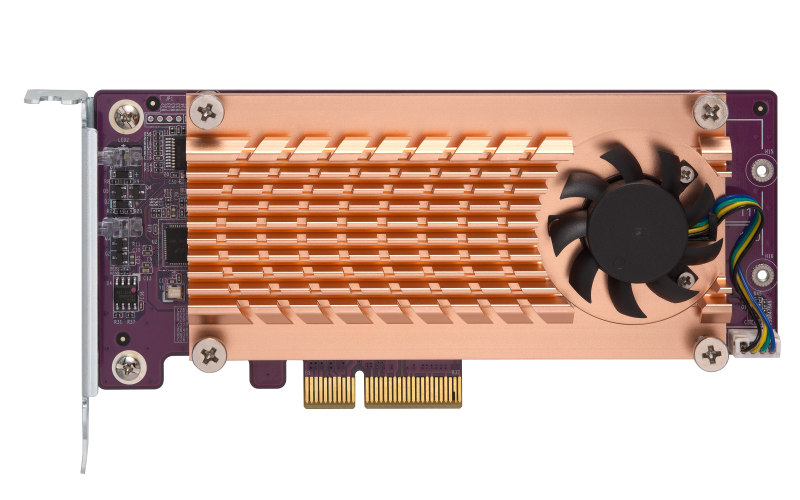 Would this solve the database access issues of a spinning disk?

You could also use USB 3.0 port for an external SSD

Yep. I tried but couldn’t get it to recognize the SSDs… I have a tS-471. The drives were Samsung 960 Pro 512 GB… I wouldn’t say they don’t work but I just haven’t had a chance to contact support on this (well, lol, they are definitely not “plug and play” in my situation)

Just for clarification I intended to use the QM2 as SSD cache acceleration (which it should be able to do); just can’t see the SSDs in my setup to create it. Any one able to do this?

I guess you checked the card in the storage manager as explained on the QNAP website:

I have recently bought a QNAP 473e and installed a QM2-2P card using one Samsung 960 M2 SSD strip as cache. It works fine and was easy to configure.
I added the SSD as cache to my main data volumes under "Main Menu > “Storage Manager” > “Cache Acceleration” > “Set Caching Storage”.

And: according to a video from QNAP (https://youtu.be/aokjZsX652E) it is possible to use the M2 SSD on the QM2 as a general storage volume. I didn’t test this but I decided to use a separate SSD in bay4 for this.

As I shared in a few other topics on this forum already: this setup pretty much rocks as a Roon server

I guess this is a recent restriction and the creation of static volumes won’t work anymore with QTS 4.3.4 or above, as written in the current release notes (see post above).

Christopher, first of all let me say that I greatly appreciate your work on getting Roon to the QNAP platform!

I find that line in the release notes rather ambiguous: it says it is no longer possible except when mounted in internal slots or on QM2 cards, is it possible to mount them anywhere else?

So I tried it on my own NAS (on QTS 4.3.4). I removed it from the cache position and created a new Pool and a test Volume. This works just fine, see attached screenshots. 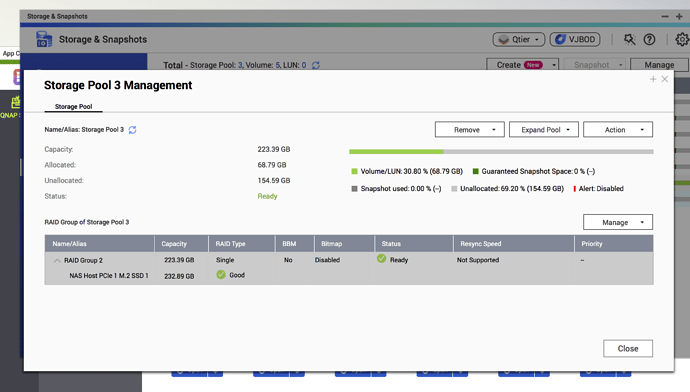 I wonder if I would notice any performance boost when I would move the Roon database to this volume with 1.49GB/s transfer rates according to the performance test! Didn’t test this and just switched the M2 strip back to its original role: boosting the overall NAS performance by working as a cache.

NAS vs Dedicated Roon Unit and Sound Quality
next page →