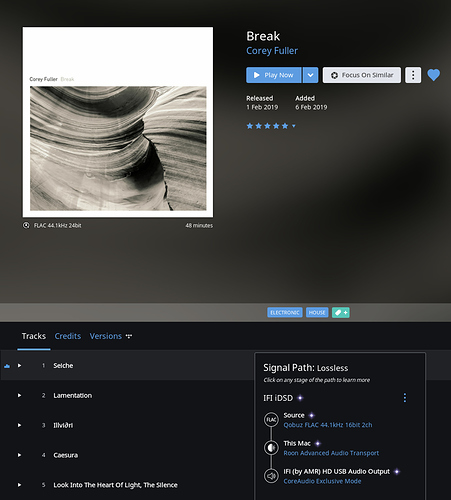 What does it play in the Qobuz app? Some of their albums are marked up wrong and some are only available in high Res as downloads.

Yes, just signed up for Qobuz, but none of the higher resolution tracks play at max resolution in Roon.

As mentioned above, best to check first if Qobuz app behaves in the same way. Could be a metadata issue

I checked. I can see the track playing at higher resolution in Qobuz app.

Are you sure? It’s only playing at 16 bit resolution in my Qobuz app (and yes, I have Hi-Res selected)… 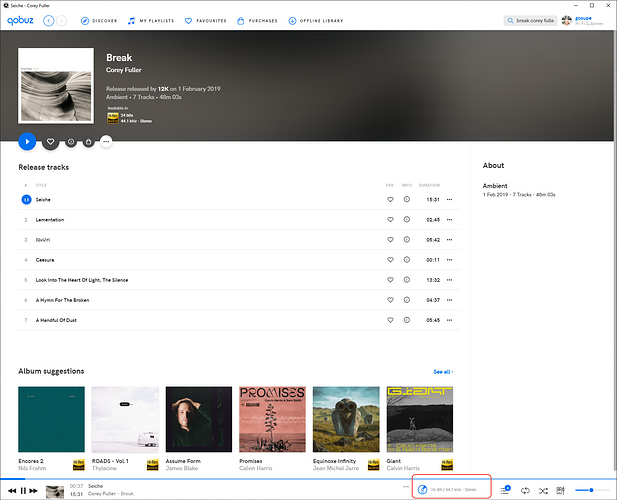 Would love to see a screenshot of the Qobuz app that illustrates that.

To me it looks like many times Qobuz is advertising the rate at which the album is available for download in the store, but streams at lower rates. Questionable marketing tactics if you ask me (but that’s a different story). 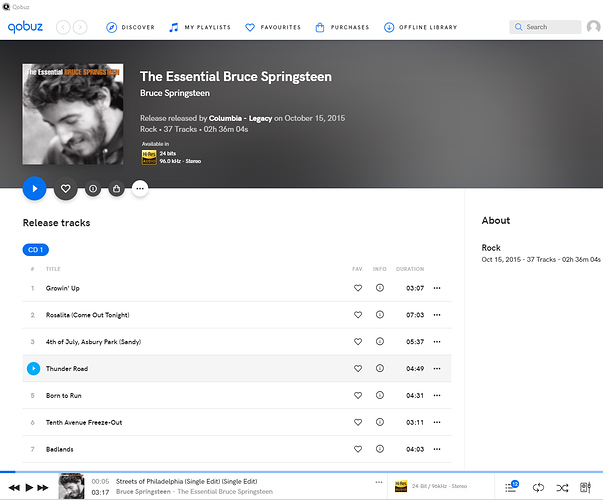 What’s the point of posting a picture of a completely different album? The only thing that makes sense is post a picture of the same album in both the Qobuz app and Roon. 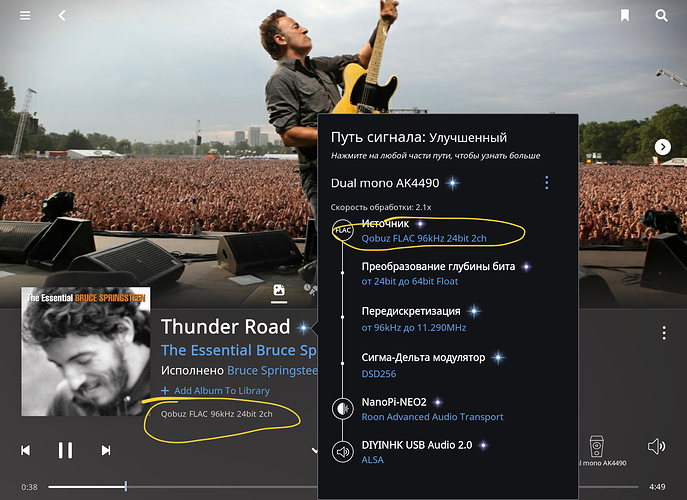 Are you sure you have hi-res STREAMING selected in your Qobuz account?
there are two settings - Music Playing and Music Download - in Qobuz.

Actaully, I just tried that album - yes it’s showing 24bit but playing in 16bit for me also.
It also plays on 16bit in the Qobuz app.

Core Fuller - Break is playing at 24bits in my qobuzz app on my mac. But as noted, is not playing at 24 bits in roon for some reason. I’ve had no issues with other 24bit albums in roon that I’ve found. 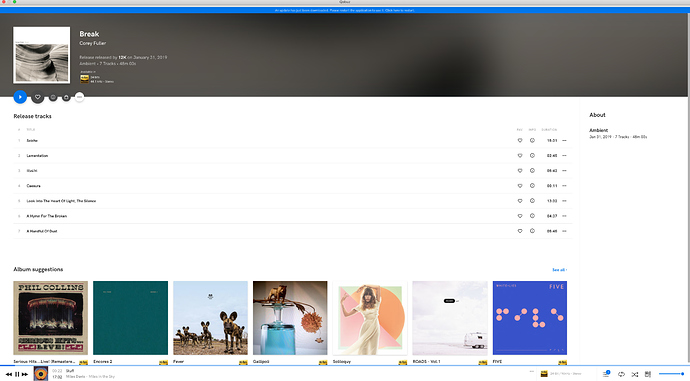 Core Fuller - Break is playing at 24bits in my qobuzz app on my mac.

OK. Please show screenshot during playback of this album in your qobuz app .

You’re right. My bad. This album does only play @ 16 bits in my mac app. Must indeed be a a meta data problem.

I’ve just noticed this as well, and it’s definitely something that changed on Qobuz’s end. I was listening to “The Worse Things Get…” by Neko Case yesterday at 88.2/24, and Roon as well as my Yggdrasil DAC were displaying it properly at that resolution. But I just tried to continue the same album today and it’s 44.1/16 (despite Roon still showing it as 88.2/24 in the metadata, but not in the signal path). Checked the Qobuz app and it’s the same story. Other high-res albums are playing correctly. So I’m guessing there’s something going on behind the scenes that’s messing with the resolutions of some albums and not necessarily updating the metadata properly.

I am having the same issue. Wanted to compare a 24/96 album on Qobuz to a 16/44 version on Tidal of the same album. It is either some kind of screw up or misleading advertising. I am in the trial period of Qobuz and unless this gets corrected quickly, I won’t subscribe — since THE ONLY REASON I WOULD SUBSCRIBE WOULD BE TO GET HI REZ and I don’t want to have to check every time I think I listening to hi rez !! I don’t know if this is a Roon issue or a Qobuz issue.

So far, not a fan !! When I signed up they made it clear that their library was not complete but they mentioned nothing about mis tabled music. 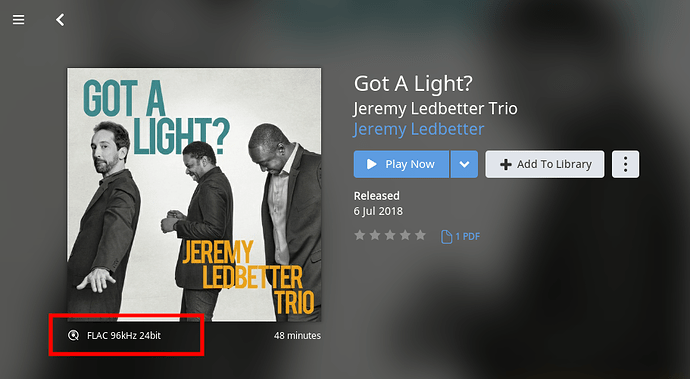 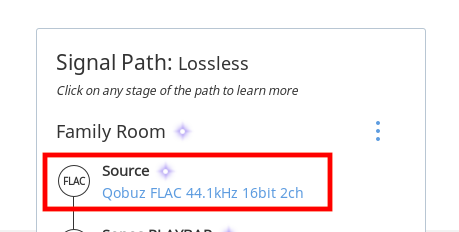 Firstly, thanks for the album ‘recommendation’, I’m not having any issues playing the 24-bit. I’m in the UK and on a month’s Studio trial.

I don’t think my setup - away from home, with crappy USB headphones is an issue - the source is detected as 24bit, despite the later conversions… 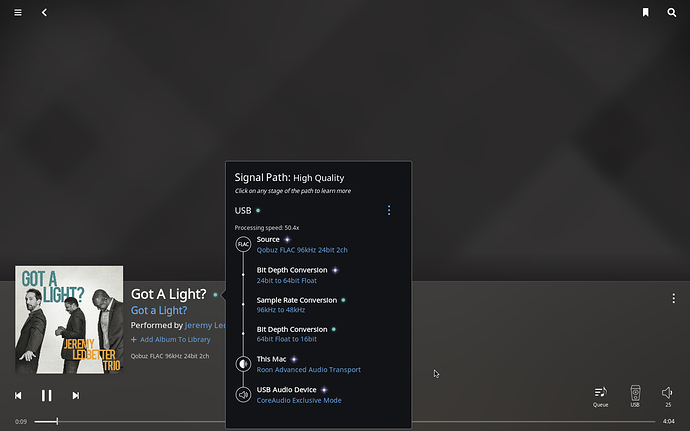 Is this album possibly an issue with the US Qobuz beta? Perhaps they are limiting streaming while they load test the servers?

I did also notice that I don’t have access to a PDF - do you add that or is it provided by Qobuz?

Also, Roon is also showing a 192kHz version, while in the web browser only a 96kHz version is available (so likely a labelling issue)… 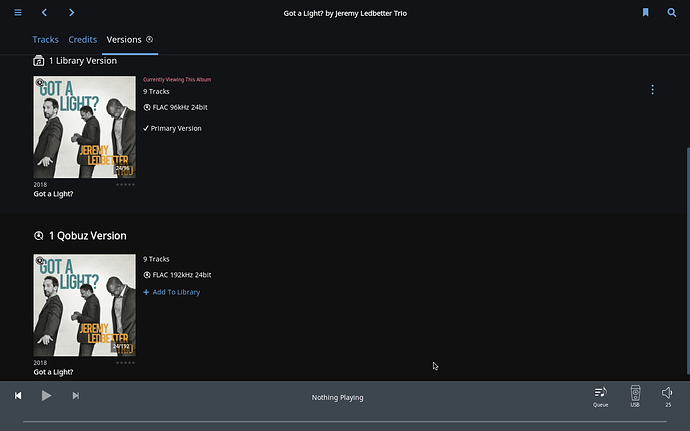 Also going through the thread, “The Worse Things Get…” by Neko Case is streaming in 24-bit for me. So again perhaps a US beta issue? 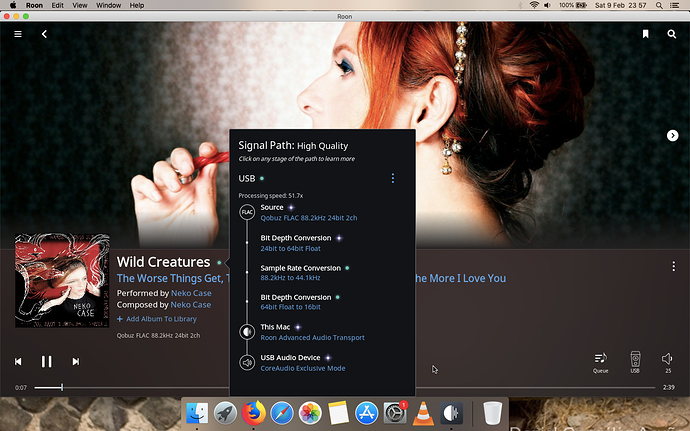 But like everyone else, I only get a 16bit version for the Corey Fuller album - Break, so this album certainly seems like an labelling issue.

I noticed that the Neko Case album is back to 88.2/24 as well, so things are certainly in flux.