2014 Mac Pro, 1.7 Build 710
Several albums I stream from Qobuz now show as unavailable in my playlists. If I do a regular search for the album, it appears, will p,ay, and I can readd it to the playlist it was in before. Now the playlist has 2 versions of the same album in it. The original one which says unavailable and the freshly added one which is fine.
One example is Avashai Cohen album titled 1970.

Welcome to the world of streaming license renewals and remastered/hi-res alternatives. A bunch of early/mid 80s Tom Waits hi-res albums just suffered a similar fate. I’ve not been able to keep a varied Room/Qobuz playlist of any size stable for more than 10 weeks or so. Infuriating but I don’t believe Roon are the problem here. 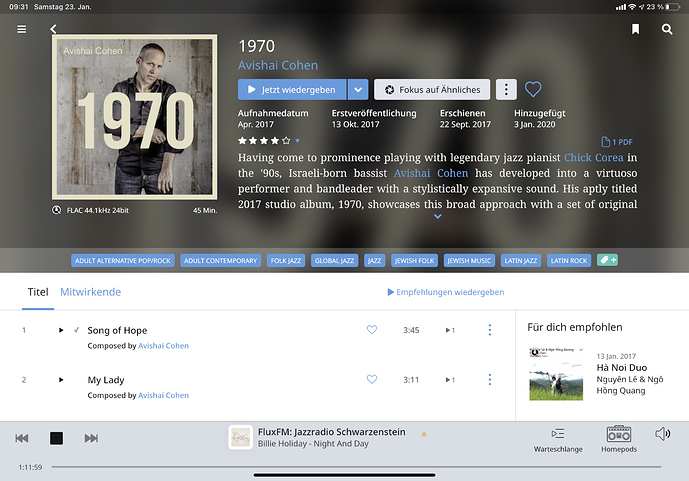 The availability isn’t usually the issue, only occasionally are albums withdrawn altogether. The issue is a library album or playlist entry is superceded when licensing arrangements change. Old versions are made unavailable and new ones offered. Library albums and playlists on Roon aren’t updated automagically. Deleting unavailable versions and replacing them with new ones is a pain.

The thing is that for example, I deleted the entire Avashai Cohen playlist. Then I went back and created it with all the same albums and it is fine. What are the odds that they rescinded rights for the 15 albums I had in the playlist originally and then 2 days later replaced them with new albums which are all granted rights?

Possibly higher than you think. I suspect it’s either a rights transfer or the rights holder insists on replacing material. There’s not many other motivations for streaming services to chop and change catalogue offerings that I can think of.

Why can’t Roon key off of some data in the album/track that doesn’t change between licensed versions, like a certain combination of Artist and Song Name and publisher’s catalog number?

Hello @moto, does the content show as unavailable in the Qobuz app?

It is available in the Qobuz app and as I said I am able to readd it to the playlist in Roon.