Qobuz Better Than Tidal Now (for me)

When I initially signed up for Roon I was a subscriber to both Tidal and Qobuz, hi-rez versions. At the time I had a poor Internet connection and older router and modem. My Roon library was predominantly Tidal versions of albums since the MQA versions did not cause as much of a problem with dropouts as did the full FLAC 192/24 from Qobuz. I was ok with that and at that time my searching of Tidal and Qobuz indicated Tidal had more titles (that I liked) in hi-rez format.

Recently I upgraded my Internet service, modem, and router. I can now stream over Gigabit ethernet without problem. The Qobuz higher rez versions play without dropout. So, I diligently went through the over 2000 albums in my Roon library checking the Tidal versions versus the Qobuz versions. Whoa! Was I surprised.

Only a handful of my library albums were in Tidal but not in Qobuz (I would say about 75 albums but most of those were in my Apple Music library so I copied them over to my Roon Core, leaving less than 10 albums only available in Tidal).

Note that my library is predominantly Rock/Pop genre with some Classical and other genres. I do not know if Qobuz is superior to Tidal for libraries focusing on other genres. I suspect Tidal may be better at Classical but my sample is too small to say. This evaluation of these two services’ hi-rez offerings is primarily for the Rock/Pop genre. YMMV.

So I moved all of my Roon library to a combination of Qobuz and local storage from Apple Music. I did some of this manually and some using Soundiiz to transfer artists, albums, and playlists from Tidal to Qobuz. It was fairly painless but not completely painless. Then I unsubscribed from Tidal. I am a very happy camper now. Thanks Qobuz!

Note: I am not knocking MQA here. I am applauding Qobuz. I found MQA very useful when I had a poor network connection. It serves a purpose and some people prefer the sound of MQA. Different lanes for different brains. Enjoy!

Just trialling Qobuz. Cannot get high res tracks to play consistently via Roon - constant dropouts. However, no problems playing the same tracks using Auralics Lightning DS. Looking for solutions but it may mean i’ll stay with Tidal for now.

I would really like to switch to Quobuz for sound quality reasons but in my case I miss 25-30% of my favourite 775 TIDAL albums. I monitor it regularly, but unfortunately that percentage does not increase over the years. 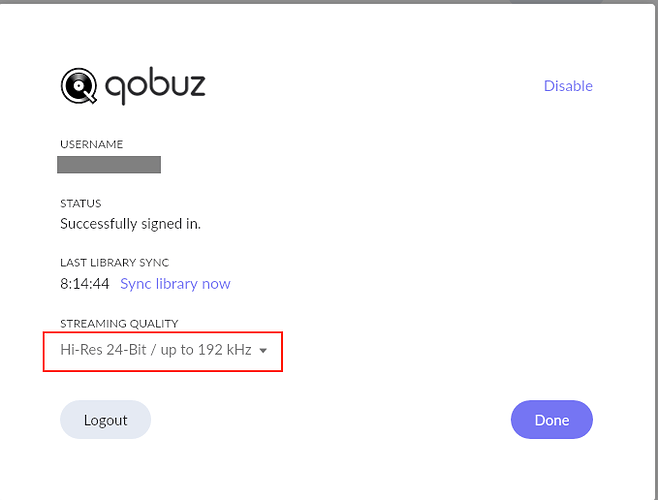 Thanks. I am streaming in high res on Lightning DS it just seems to be an issue with Roon. Playing redbook files is no problem. Will see what Qobuz help have to say…Pity they dont have a forum like this!

You email them. I did recently and got a pretty quick response.

Alternatively you can go over to AudiophileStyle.com and post in the “Qobuz issues thread” where there are a couple Qobuz reps active. Would be nice if we had some on here as well.

I was also subscribing to both, but a year ago I dropped Tidal in favor of the true Hi Res audio I was getting from Qobuz. No regrets whatsoever.

I would really like to switch to Quobuz for sound quality reasons but in my case I miss 25-30% of my favourite 775 TIDAL albums. I monitor it regularly, but unfortunately that percentage does not increase over the years.

25-30% is surprisingly high. My library had only about 4% of the albums available in Tidal but not in Qobuz. Of course, this is going to vary from library to library as each of us is only using a fraction of what is in those services’ catalogs and that fraction differs according to personal taste. What genres is your library primarily composed of? Most of my missing titles were Classical or specialty titles like an EP or compilation.

Even if your library has only 4% missing titles when migrating services, those missing few albums are, for me, the hardest part of the move. I really did not want to lose those. Fortunately, I have a fairly large Apple Music library based on an even larger CD and vinyl library which I have ripped into iTunes over the years. I was able to find most of the missing titles in my Apple Music library.

I did end up buying a couple of things I just could not find. The Wrecking Crew box set is well worth the $20 on Amazon and the Tidal store has Ringos Desert by ZHU for only a couple bucks. Still, I never found a few and that hurt. Why isn’t “Song for Juli” by Jesse Colin Young on Qobuz?

Basically, what I found and what is probably going to be true for any music lover, is that a service migration is going to be painful no matter what the overlap between services. In my case I managed to mitigate the pain by augmenting my Roon library with local versions. In your case, however, that would be too much to lose. I would not have attempted to migrate a library that had over 25% missing titles. So, Tidal it is for you and I was happy with Tidal. Hope you are too.

And as it will vary by each individual taste some will find that Qobuz has more titles to offer than Tidal.
It did for myself here in the USA and tbh Tidal customer service is dreadful!

It was a no brainer to drop Tidal as soon as Qobuz came online here( I had been trialing it on a Beta test a few weeks before general release).

I have 1131 albums linked in Qobuz and 1122 in Tidal. Almost all are the same except there are 19 in Tidal, not in Qobuz. There are 17 in Qobuz, not in Tidal. I keep both services because the prices are affordable and I like to compare the SQ. I also like having both feed Roon Radio and New Albums for You and I like the redundancy, although, I’ve yet to have a problem with either or Roon in 1 1/2 years.

Yes, also for me:
As a long term user of Qobuz, I’ve bought now again for a month Tidal and I like the Qobuz integration in Roon much more than the integration of Tidal.
I’ll find my preferred music easier.
But it depends to what you’re like to listen.

Thanks. I am streaming in high res on Lightning DS it just seems to be an issue with Roon. Playing redbook files is no problem. Will see what Qobuz help have to say…Pity they dont have a forum like this!

Just trialling Qobuz. Cannot get high res tracks to play consistently via Roon - constant dropouts. However, no problems playing the same tracks using Auralics Lightning DS. Looking for solutions but it may mean i’ll stay with Tidal for now.

I am not familiar with Auralics but that hardware streamer looks sweet. The solution, for me, for dropouts was to increase my network bandwidth. I upgraded my Internet connection with my provider (this actually did not cost me much) and I purchased a modern modem and router along with several mesh endpoints for the router (Linksys). I also wired my Roon endpoints wherever possible, moving some from wifi to ethernet but especially the Roon Core needs to be wired ethernet.

I do not have any explanation of why Auralics would behave differently than Roon when streaming the same tracks over the same network. Perhaps the Auralics hardware streaming device has some sort of smart buffering? Or the tracks are not, in fact, the same sample rate and bit depth? Or the Auralics streamer is network connected differently than the Roon Core? Or you are using wifi somewhere as a Roon endpoint?

Anyway, if I had one of those Auralics devices I would just use that. But, it appears Auralics can treat Roon as another streaming source? I gotta check that out.

I believe it’s because the Auralics (and Qobuz and Tidal apps) handle the streaming to an output device differently to what RAAT does. If you look at the network traffic, RAAT is much more of a constant load on the network in real time. The others do more buffering up-front, so they’re more resilient to network dropouts, but at the cost of not being able to support synchronisation across Zones in realtime (which RAAT does).

Here’s some examples of RAAT traffic at various sample/bit rates: 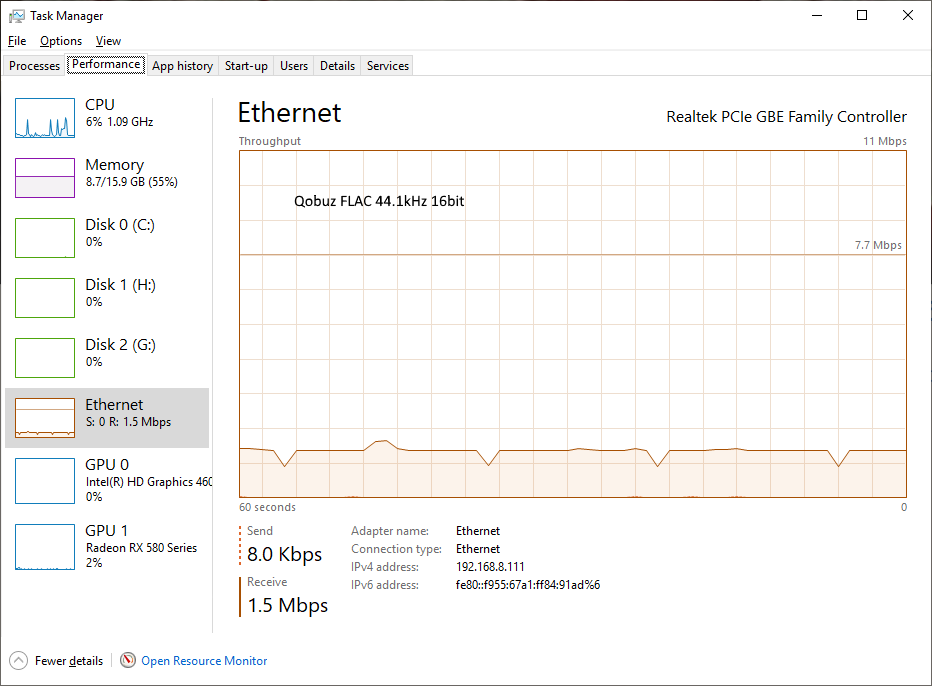 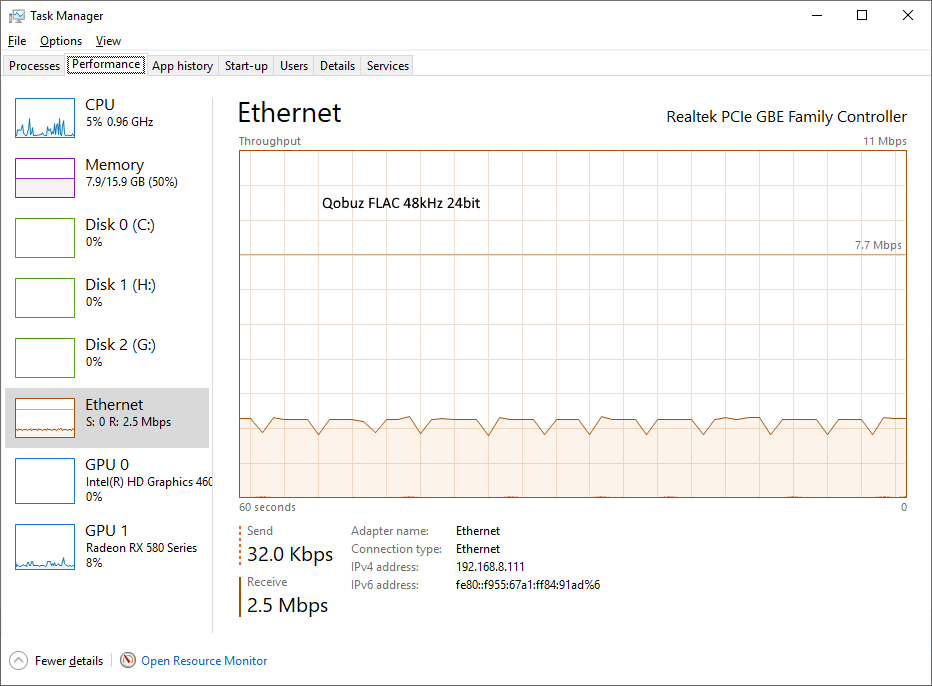 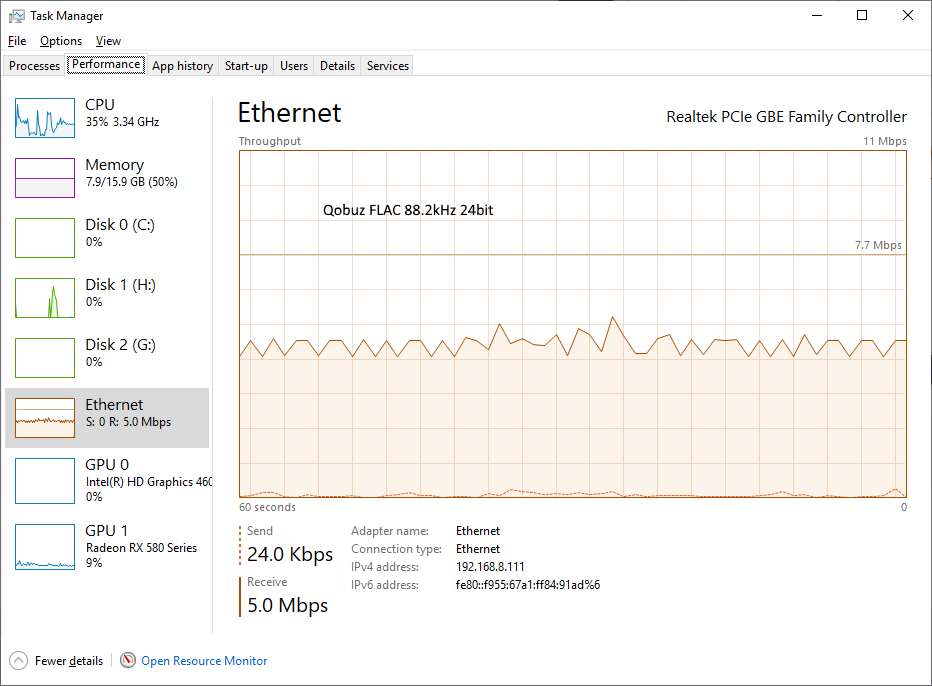 And here’s what happened when I tried to stream Qobuz in Hi-res before I got my fiber-optic internet network connection: 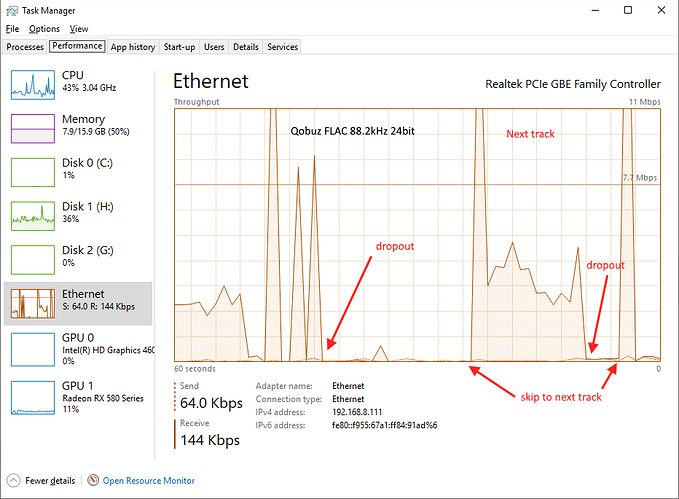 Thanks, i’ll give the other thread a visit!

Thanks, i am using ethernet already. Only through my ISP’s basic modem/router though

Thanks Geoff, your last graph certainly looks to illustrate the performance i’m getting! Time to look at the quality of my internet, plus the modem/router.

My interest is mainly in alternative rock, indie, psychedelia and avant-garde music. I have the impression that Q is mostly mainstream in terms of modern music.
Sometimes I think to add Quobuz-membership (besides Tidal) but that is too expensive for me. I have a number of hobbies that also cost money

Qobuz has just arrived in Australia so am taking advantage of the one month free trial. I totally agree with your preference for qobuz. I subscribe to tidal hifi at the moment but at the end of the free trial will be switching subscription to qobuz. Sound quality is noticeably better, more natural and better approximates my own cds that have been converted to flac. Tidals mqa in my opinion is a total disaster, it is so highly manipulated as to sound totally unnatural. Never been totally happy with tidals sound quality so qobuz is for me and $6 a month cheaper.

I am a happy Qobuz subscriber.