Qobuz favorites not in library

So, a Qobuz “added” album is not (necessarily) a Qobuz “favorite”?

I have found this so confusing that I am now on my 5th day of a 1.5 to 1.6 migration that seems to have gone very pear shaped.

So, a Qobuz “added” album is not (necessarily) a Qobuz “favorite”?

Yes it is. However, there is a distinction between Qobuz “favorites” and Roon “favourites”. This causes confusion to some.

I see no logic or correlation at all in my library that makes the slightest sense to me. I would not have noticed, except I am migrating libarries and it is obvious they do not add up.

I have absolutely no idea what to expect when trying to navigate roon/Qobuz integration and there is almost no metadata in genres I am interested in. Not really what I was expecting.

Do you have any examples of albums that are favorited in Qobuz but are not in your Roon library?

Where are you viewing these favorites?

If you navigate to Qobuz | My Qobuz and view your favorites, you’re looking at these albums exactly as they are from Qobuz outside of your library. We have an article describing why this is here.

Do you have any examples of albums that are favorited in Qobuz but are not in your Roon library?

I have added about 3,580 Qobuz albums. A mixture of Pop and Classical. Most of the Classical is heavily edited as roon consistently has no metadata. No composers, no performers, no work titles and no compositions.

I thought there was only one place to view Qobuz favorites. Qobuz->My Qobuz->Favorites. There are about 530 there. But I have about 3,580 added Qobuz albums. Quite a mismatch.

From the knowledge base.

"Once an album is added to your library you can make various edits and changes to the album. You may also only have a portion of the tracks from an album in your library rather than the full tracklist. For these reasons, we think it is important that you can still navigate to the original, unedited version of the album directly from the streaming service.

By doing this you can add any missing tracks and see the album as it’s presented by the original service without any user made modifications."

This makes even less sense to me than it did before.

I cannot see any visual clues when you navigate from the Qobuz favorites that as the KB implies you are looking at a Qobuz rather than a library version. And anyway, this is simply not the case. In many genres (Classical but others as well) you are looking at roon’s interpretation of Qobuz via third party metatada providers and my experience is there is often huge gaps or no metadata at all compared to what you find using a Qobuz app.

All there is really to go on that you are in some kind of Qobuz space within roon is there is an “add to library” button plus in my library the album screen from this starting point looks completely unrecognizable because I cannot see any of my edits. That may have seemed obvious in development. Not at all obvious to me and many others I would imagine.

Let’s take an example. This Qobuz album of Bach Cello Sonatas has almost no metadata in roon (common in my experience). I cannot remember whether I favorited it in Qobuz or added it in roon. It appears in my roon Qobuz favorites and when I navigate from it in roon it looks like this: 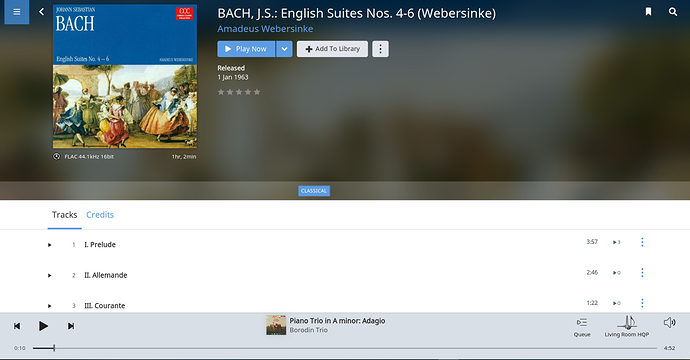 There is no composer (Bach!), no works, no composition hierarchy. Almost useless. This is nothing like it looks in Qobuz. So, after adding it to my library and heavily editing it I get the following: 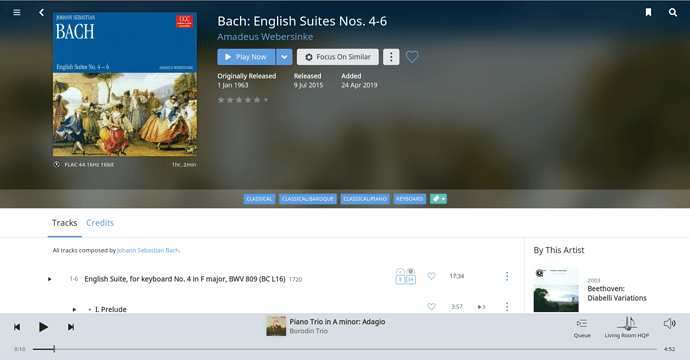 The second version I now get from all navigation starting points except from Qobuz favorites when bafflingly I get the first almost useless one. I just cannot discern any logic to this approach at all. I cannot see that roon is presenting me with a useful comparison between the Quobz and library versions. All it is doing in a really difficult to comprehend way is sort of presenting me with a comparison between a roon interpretation of Qobuz and my edited interpretation of Qobuz. To be frank the roon interpretation provides no value add at all except to annoy. If I want to see what Qobuz has I just use their app and the roon app side by side and screen scrape. It is the only practical way of editing the library version so that I can at least find (many) albums like this in the future.

I thought there was only one place to view Qobuz favorites. Qobuz->My Qobuz->Favorites. There are about 530 there. But I have about 3,580 added Qobuz albums. Quite a mismatch.

Tony, just for clarity, all these albums are added from the streaming service, right? They are not albums that you have purchased from Qobuz, downloaded, and then added to the local storage of your Roon library?

To start, I’d like to focus on the mismatch in numbers.

In library vs out of library

Just to clarify, when you’re viewing albums in Qobuz | My Qobuz, it’s not the exact same as viewing it in the Qobuz app, but rather the original version of the album as it is presented in Roon, from Qobuz. Apologies for not being more clear on that.

So, for example, let’s say you add an album from Qobuz to Roon and you re-identify it, change the album name, and give it a new cover. When viewed in your library, you’ll see these edits.

If you navigate to it outside of your library, you will not see these edits.

Regarding this, we have projects in the works to improve this, as mentioned here:

Hi @Geoff_Coupe, We’re aware that there are times when the Qobuz app may display metadata that’s not present in Roon, but for the moment this is expected. Roon’s metadata is built on top of data that allows for a richer and more expressive understanding of music, and we’re exploring ways to integrate the data displayed in Qobuz without affecting the overall quality of metadata in Roon. This example may seem straightforward, it’s important to remember that a single change can affect hundreds of…

No. I have not purchased any downloads.

At this stage I cannot remember if albums were favorited or added. I would say that the vast majority were added. Typically from the radio.

My experience has been of roon/Qobuz synchronization issues right from the beginning of 1.6. I accepted as many did I am sure that it had been fixed but TBH I did not look too closely and when it is thousands not closely at all. However, I am trying to migrate a laptop library to a larger static PC based roon and now it is obvious there are these discrepancies because I am staring at the counters and nothing matches as I thought.

Ok, then hopefully your answers to Dylan’s questions above should help to throw a little more light on what’s going on here…

I use the download store very occasionally as I don’t trust the metadata. At the beginning I favorited within the Qobuz web app. Mostly I add within roon now, typically from the radio but never from “playing now” (I sometimes risk it with Pop). I want a quick visual on how bad the metadata is so I go to the album screen. Often I will not add to roon or download from Qobuz and go elsewhere if it is important to me. 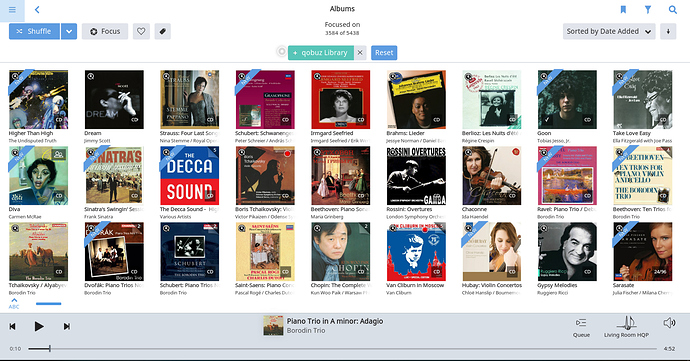 Yes. I don’t use Qobuz for downloads. Don’t trust the metadata.

No, I cannot. I assumed we were all on the same page talking about exactly the opposite. If I go to the Qobuz favorites and tab through to the very last album I see this (about number 530). 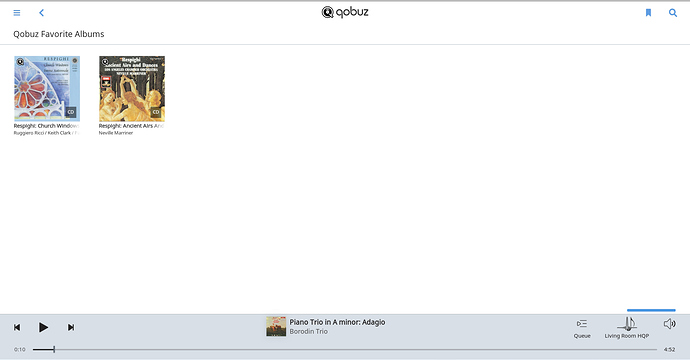 All the preceding albums I see in the focus, but all 3,000 albums after that point in the focus I do not see in the favorites. I thought this was the (secondary) point we were talking about? That I am not seeing bi-directional synchronization? Have I misunderstood more of what roon does and doesn’t do? Is it not a simple bi-directional synchronisation? I am quite bewildered at this point. 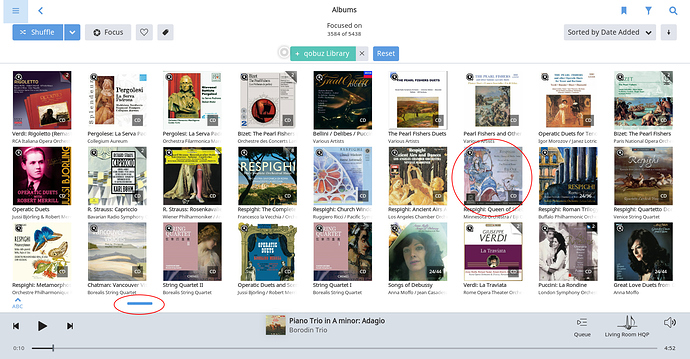 Just to clarify, when you’re viewing albums in Qobuz | My Qobuz , it’s not the exact same as viewing it in the Qobuz app, but rather the original version of the album as it is presented in Roon, from Qobuz. Apologies for not being more clear on that.

Yes, precisely my point. From this perspective whatever roon thought they were doing just doesn’t make any sense. If roon was providing a visual equivalent of Qobuz by this navigation that could be quickly compared with roon library edits then with a better GUI design I can see some marginal value. But that is not how it is. If you have edited the library version it just provides a pointless rather confusing navigation back to a broken roon/Qobuz integration the edits were made to fix. See my example above. Makes no sense.

It strikes me that this is a display issue where only 500 albums are displayed in the Qobuz subsection of Roon.

John, I think you’re on to something here. I’ve just been re-checking my library, which has 690 Qobuz albums that have been added to it. When I go to the Qobuz Favorite Albums in Roon, there are only 530 displayed. The Qobuz app shows the full 690 total. Viewing the albums in date added order shows the same sequence in all three browsers; only in the Roon Qobuz/Qobuz Favorite Albums browser does the sequence get cut short… @dylan - there’s a bug here, I think… Interesting that both Tony and I see 530 albums, don’t you think?

Yes John. I think you are on to something. It is difficult to be absolutely sure because neither the roon or Qobuz app favorite pages have counters. On the roon app I scroll 24 at a time. So I scroll 22 pages x 24 = 528 + 2 = 530. On the Qobuz app I can only scroll 10 at a time. But after 53 tabs there is plenty to go. Visually I can see a group of 10 Shostakovich albums in the Qobuz app favorites but not in the roon app Qobuz favorites.

Adding to confirm, I also see only 530 albums under ‘Qobuz Favorite Albums’ and all 1519 under Focus. I haven’t used this view in a long while, so around 30 were first display and Roon then synced with Qobuz but stopped at 530.

BTW I simply bookmark +QOBUZ in Focus and use this to display all the albums.