Today my problem is solved : the message has disappeared. I have rebooted my iMac again !

But since yesterday I have a new problem : when I select an album as favorite in www.qobuz.com, this album is not seen in Roon. (It is seen in Audirvana+). Before I could see in Roon my Qobuz favorite, marked in the web. Now I have to make a search for this album in Roon and choose the option Add to the library.

I’m glad to hear that it’s resolved for you!

Regarding the Qobuz favorites — When you favorite a track or Album in Qobuz it should automatically sync to your Roon library. It isn’t instant though, we only periodically sync with Qobuz. If you’ve just added a favorite and want it to appear in Roon you can go to the Qobuz section of the app and click/tap the refresh icon, this should initiate a sync for you.

I have just tried to go in section Qobuz for rescanning and my new favorites arn’t in Roon.

Qobuz should sync favorites automatically, so it sounds like something else is occurring here. If you favorite an album in Roon do you see this reflected in Qobuz?

Yes if I favorite an album in Roon, I see it immediately in Qobuz.com in my favorites.

Thanks for confirming that, @Didier_Duvanel.

Moving forward, I’d like to enable some diagnostics on your account so the technical team can take a look. Before doing so, I was hoping you could do the following:

Respond here with the album name, artist name, and the time you hit sync and then we can enable diagnostics.

Ok I did what you wrote.

It is ok! But only if I favorite an album in Quobuz app.

I want to favorite an album in www.qobuz.com. And this don’t succeed.
I tried with safari and Chrome. Before it was ok and since last sunday no longer.

Also I have reboot my iMac. I favorite the album Stop It, by Snareset.

at 17:05:03 (Time in Switzerland) I went in section Qobuz in Roon and press the sync button.

Album favorite was not in Roon.

Thanks for the info @Didier_Duvanel.

Yes my favorites albums appear in My Qobuz album prefered in Roon.

But they don’t appear in Lybrary, Album.

Now that I have the timestamps you mentioned above, diagnostics have been enabled on your account. The next time your Core is active a diagnostics report will automatically be generated and uploaded directly to our servers

Do you have any news for me?

Please accept our sincere apologies for the delay here! I checked in with the team, and they’re still looking into this. I’ve tried replicating similar behavior by favoriting items on the Qobuz web player, and I did not experience this issue, so it seems as though there is something specific to your account or environment. When I checked in with the team they let me know they’re hoping to have additional feedback in the next day for me — I’ll be sure to reach out as soon as that feedback is received.

In the bigining I succeeded in seeing in Roon albums which I had marked in www.qobuz.com (not in the web Player). I speak about the lists of new albums published every day.

I speak about such a page where I I can click on the little heart under the cover of thé album for marking as favorite. 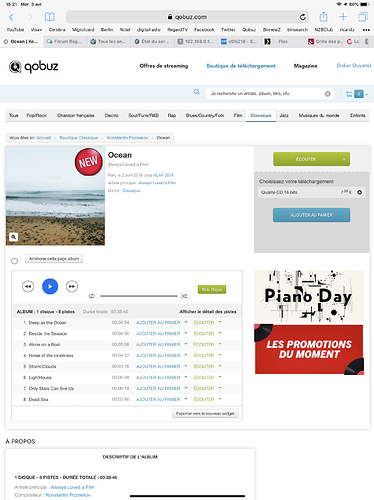 I just wanted to reach out with an update. We have reproduced this behavior you mentioned — When a favorite is added from the qobuz.com Download Store, this doesn’t sync properly to your Roon library.

While I can’t say for certain when this issue will be fixed, getting things reproduced in-house is a critical first step, and I will keep this thread up to date as the team passes along feedback and work begins to get this resolved. For now, you’ll need to add the album to your favorites from Roon, the Qobuz app, or the Qobuz Webplayer for it to sync with Roon. Thanks again for the report!

Ok! Thank You very much for your help and all your tests.

We are continuing to investigate this, but we wanted to reach out and see if you’re still experiencing this behavior. On our end it appears that the ability to favorite directly from the Qobuz website’s download store is no longer available — Are you seeing the same, or are you able to favorite tracks there?

It’s now more difficult for marking favorite. I must open the album in the web player for marking it. I wrote to Qobuz and I’m waiting for a response.

The heart is back on www.qobuz.com. But it is still impossible to have favorites into Roon.