[…] please: do NOT auto-add them to my library but let me, instead, just pick the ones I actually want to be there by clicking “Add to Library”

Roon is unlikely to change its approach to favourites without good reason. Many users would be annoyed to find that Qobuz favourites were not automatically added to their Roon libraries like Tidal.

Have you considered using a Tag in Roon to mark Qobuz Albums you are considering purchasing ?

This is how Tidal works and is how it should work or what’s the point of having the library integration at all as you have two disparate libraries.

Favourites, though, has always been (since Qobuz is out there) the place where I store albums I want to listen to before, in the past, purchasing or, now, actually adding to my Library

I do understand Tidal was integrated from the very beginning in Roon but… Qobuz and Tidal are different in one key aspect: Tidal does not also sell digital downloads! (and it does not send you three/four mails per week with plenty of new releases/stuff to explore

Time, maybe, to rethink the whole logic behind “favourites”

otherwise… why keep a separate Qobuz section where all of the above already is?

(apart… don’t you find it “quite weird” having an “Add to Library” button in albums that already do show in your library?)

a (simple, I believe) solution would be giving users an option to keep local and streaming “libraries” separate (or not)
see also what happened, because of applying to Qobuz the very same “Tidal logic”, with all the duplicates (purchases already phisically in users libraries) you now need to fix

but… Qobuz and Tidal are different in one key aspect: Tidal does not also sell digital downloads!

But Tidal does sell downloads as well so they aren’t really different in that regard.
As suggested previously just tag/bookmark your Qobuz favorites and hide/unhide then as needed. The way Roon currently works is probably the preferred option for most people.

… hhhhmmmm… now that I have all my 721 favourite albums selected… how do I tag them all at once?

You have done the hard bit in selecting them. Now just press the 3 little dots next to play now at the top and choose to tag them. Easy!

You should have a few more choices unless I am missing something…
This is what mine shows. 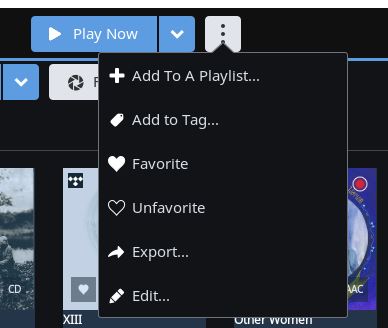 that’s from your library, not from “My Qobuz/Favourites” section: the only place I can pick all my favourites at once

You can’t see them in the albums listing? If they are mixed up with your local albums then just use focus to find Qobuz only.

Purchased downloads should be local files. Are they showing up in this Qobuz filter ? 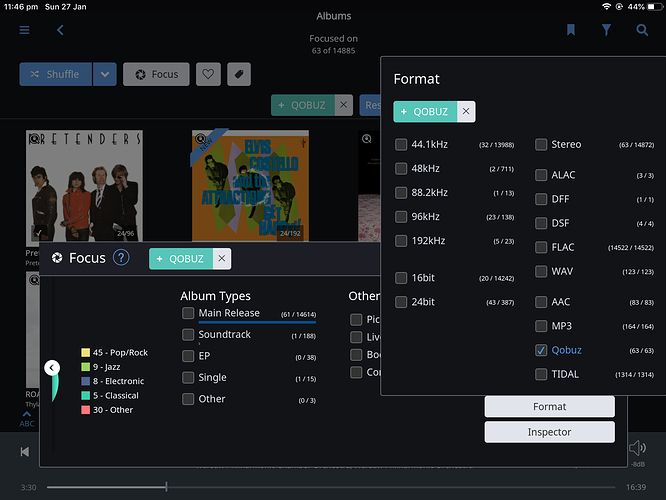 yes, they are (duplicates of my already physically in library files) so… as I said… can’t pick just my Qobuz favourites from there

… unless I scavenge albums one by one

I don’t use Qobuz (yet) but is there something that you can use Focus for to differentiate the duplicates?

So the local files aren’t appearing in your Qobuz filter. Good.

You can Focus on Albums that are Qobuz streaming (Format/Quobuz) and duplicates of local files (Inspector/Duplicates). What do you want to do with them ?

Jeff, I don’t think that works. There is no automatic tag created for Qobuz items by Roon such as “Qobuz: Purchased Albums”, for example.

Andrew’s method of using Focus (see post above yours) is what worked for me to weed out Qobuz albums that I had purchased that had been added a second time into the library as part of the import process.

His purchased albums should be in local storage already, unless he now wants to stream stuff he purchased.

I assumed smoking favorites and starting fresh was the desired outcome but I see you guys are trying to keep the Qobuz favorites that weren’t purchased.

I didn’t mind my Qobuz favourite albums being imported automatically into the library, but the Qobuz Track favourites I didn’t want there, these were just tracks I liked, I didn’t necessarily like the album or the artist - just clicking the heart button on a track now playing was a nice way to make a list to stick on shuffle when I couldn’t be bothered to choose something specifically. I think now we know, if you haven’t yet integrated Roon then tidy up your playlists and favourites before you do so, making playlists of those favourites you want in roon but don’t want in the library.

There was no way of isolating these albums in Roon effectively, so the only way was to go back to Qobuz and using the desktop app (its far easier to use a real keyboard for this sort of stuff) un-favourite all the tracks in the track favourites list one by one. A pain but its quite quick if you only have a 600 or so like me - I just kept tapping the track pad with the mouse pointer on the little heart on a per track basis and the list just scrolled up as the tracks were deleted.

I think Roon are rethinking the interaction of Library and Favourites, as streaming services often have a different viewpoint to handling these. I would have much preferred Roon to ask if I wanted to add favourites to my library, then given me a easy way to add them later by offering a ‘pick and add to library’ screen somewhere with all the focus and filter controls.

You can Focus on Albums that are Qobuz streaming (Format/Quobuz) and duplicates of local files (Inspector/Duplicates). What do you want to do with them ?

… hhhhmmmm… nope, I need to exclude duplicates of my purchases as I want to pick just my favourites and tag them “Qobuz Favourites” (doh!