Over here in Europe – i live in Switzerland – Qobuz-HiFi-Streaming is quite popular (in my neighbourhood way more so than Tidal). I like their catalogue. And the quality is top.
But I don’t like their presentation of their vast selection of classical music at all – and roon could change that forever. Qobuz-integration à la Tidal would be very welcome. In my case that would trigger an immediate lifetime membership (if roon sounds great [= transparent] and works on my macs and my iPad as expected [as shown in the videos]).

12 Likes
Why not Qobuz...?
Roon and Qobuz support
What streaming services will be supported at launch?
Add Spotify, Deezer, Qobuz... support
Spotify support - same as Tidal
FusionFive (fusionfive) May 15, 2015, 4:24pm #4

I believe Danny mentioned elsewhere when asked about Qobuz support that right now they’re under bankruptcy protection in France and as such wouldn’t justify dedicating resources for development. This of course could change if their financial situation improves in the future.

In the UK Qobuz is more popular in audiophile circles as far as I’m aware, and if you supported it your product would be of great interest to a lot of these users I’m sure (me included). From your brief information, it looks exactly what I’ve been searching out for ages and never found - because it doesn’t exist!

PS I would also need the iOS remote on an iPad mini as I run a headless mac mini as my main music server. (into a Devialet D200 just for your info)

Im no expert, but to my knowledge Qobuz is no longer in protection?

@hifi_swlon – where did you hear that?

that says its still ongoing until June 15th, but also:

CEO Yves Riesel said revenue were twice as high in March as a year earlier, as they were in February, January and December. Qobuz has been growing steadily for a little over 6 months. He added that the company was looking for a new owner or backer, but not a direct competitor.

Until they get that new owner or backer, I am concerned about their future. They needed Jay-Z more than TIDAL did

That was my understanding of the general consensus on forums, but your source seems to contradict that view!

Still, they may well survive, and us Europeans are using it!

So far I haven’t really considered a playback product unless it has Qobuz support, but I see your point on why you’re focussing your efforts elsewhere, and I will certainly try Roon with Tidal as a comparison once your iOS app is out.

Well as a very satisfied Qobuz user who would probably (almost certainly) not use Tidal because of Jay Z interest, I would still like to see Qobuz support as if everyone waits and worries about their future they probably won’t have one!!

After all if you are on a monthly payment plan to them and they do fold, what have you lost?

@NickB, I’d guess it cost Roon Labs over half a million dollars to get our TIDAL integration where it is. That’s what we’d lose if TIDAL went out of business in 6 months

Salaries for developers, business people, time lost to meetings and issues found, plus support costs… this stuff is not cheap.

As for Jay-Z, I personally don’t listen to his music or even HipHop/Rap/whatever-its-called-that-he-does. but I love that these guys are funding great quality streaming music. I know that with RocNation’s backing (Jay-Z doesnt have a direct investment, its via RocNation), TIDAL doesn’t have to worry about being profitable for a long time. That puts them on equal footing with Spotify when it comes to company security.

OK that’s cool when and if you do let me know.

Just raising my hand as another fan of Qobuz over Tidal. Totally understand why it’s not covered at the moment though.

Another Qobuz user here. I’m currently signed up to the trial and I’ll make up my mind whether to sign up fully at the weekend. If Qobuz had been integrated in the same way that Tidal appears to be, I’d have signed up already.

I realise why you may be reluctant to include Qobuz at this stage, but I’d see it as a big plus if it could be incorporated into the software at some future point.

As I am not interested in Tidal, I will just end my Roon trial but keep any eye if Qobuz is going to be supported.

Thanks for the feedback here guys – we’re keeping a close eye on these requests, and they’re a huge part of how we prioritize work internally.

We’re rooting for Qobuz, and I’ve been a fan of their service even before we met with them earlier this year. Although we’ve done less hands on work with them, the points I made about Deezer here stand and we’ll be keeping an eye on the situation.

For now all I can recommend is taking Tidal for a test drive, but also keep in mind that Roon has only been released for 9 days! We’re just getting started guys, and we really appreciate all the feedback.

Another vote for Qobuz. The Roon/Tidal integration is excellent but Tidal’s lack of album/track details for classical music is very frustrating. Many tracks don’t even tell you who the composer is (unless I’m missing something). I’m also worried about Tidal’s future commitment to classical music since the takeover, but that may be unjustified.

We dont use TIDAL’s metadata at all, so if you are missing metadata for a classical album, and Qobuz has the great data for that same album, do let us know.

A good example is Julian Bream - The Complete Album Selection. Tidal doesn’t give the composer or even identify which tracks are part of the same work. The attached screenshots show the difference between Tidal & Qobuz.

I do understand your reasons for going with Tidal at this point and keep forgetting that Qobuz is only available in Europe. 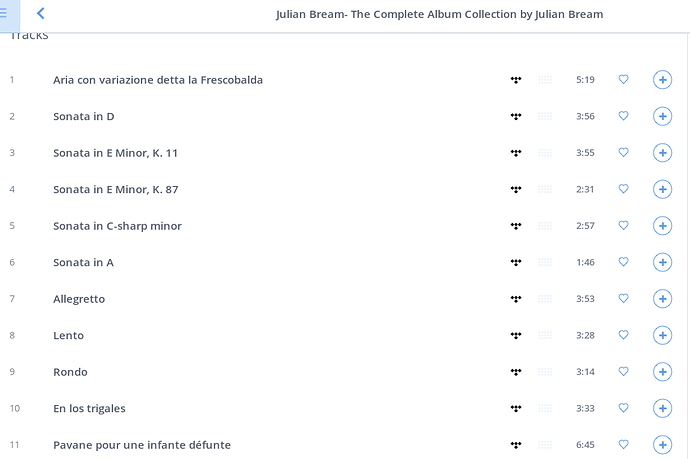 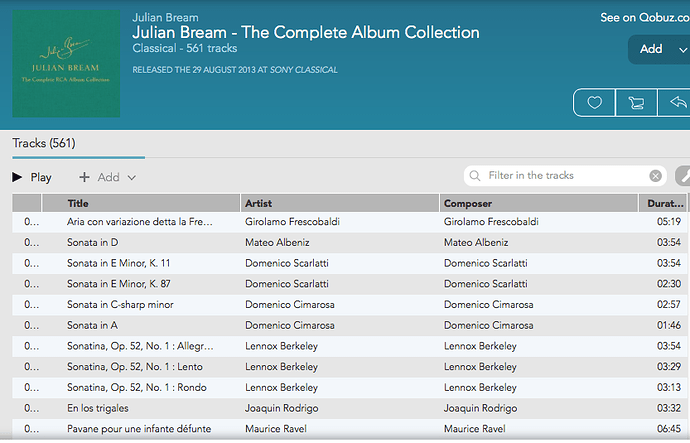 Another vote for Qobuz. Once their financial situation is resolved I believe Qobuz integration would be a great asset.

They have extensive meta-data and excellent high-rez album art for most albums as well as .pdf “liner notes” for many.

I’m sure their meta-data could be easily mapped across to Roon.

As a subscriber to both Qobuz and Tidal I like both services. In my experience Qobuz has a more extensive selection of music of all genres, including a far better choice of Classical, Jazz and “World music”.

On the other hand Tidal puts together excellent playlists, such as, for example, their London Jazz fest playlist.

I’ve also found some music on Tidal that is absent on Qobuz.

Qobuz is also a “shop” where the user can buy and download Redbook plus, in man cases High-Rez releases, which they refer to as Studio Masters.

Their offer of High-Rez at discounted prices recently should have helped to bring in the cash as well as their annual “Sublime” subscription.

They’ve also really got their act together with the latest releases of their app for IOS. It is indeed “sublime”.

Crap! that Julian Bream collection is because none of our data providers have data for that set, however, each album is well represented, just not as part of the set. Ugh.

Do you have a case w/ Qobuz where it’s not a huge album set? We should get that Julian Bream big collection fixed, but it’s a different type of fix than just lacking data wholesale.

Hi, Chris. That we’re owned by pop stars doesn’t mean we only focus on pop. We are music lovers and broad curation of any genre has been part of our DNA for a long time. Now more than ever.

Hi Pål, thanks for the reply. I’ve had a chance to explore the Tidal library and the classical selection is very impressive. I do like jazz and old-people’s rock music as well, so it’s good to have access to these, and I will try some of the other recommendations.