There are massive problems using Qobuz with Roon since a few days. Trying to use Qobuz ends in an error message “network connection problem”. But everything is fine. There are no other applications having network problems. Using Qobuz with the stand alone Qobuz-App has no problems. Access with Audirvana works fine as well. So obviously it is a Roon-problem? Is there anyone having the same problem? How can I fix it? ! 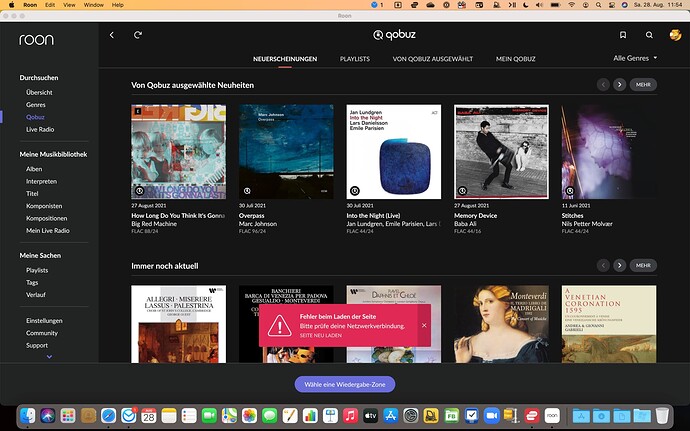 I have the same problem. It‘s only in Roon. Qobuz app works fine.

Same „Problems“ here (in Germany) too…

Feel with you guys, but doesn’t seem to be a general problem in Germany, since it’s working flawless here all day long…

To narrow down the problem a bit:

Have someboby the same „Problems“? Maybe also with Tidal?

Now, that’s something I’ve occasionally seen for a while now too, but the message appears instantly.

Thinking about it, another quirk raised its head around the same time:
When starting live radio I get “…unable to play this station…” as well as “…started playing…” messages overlapping each other with the stream not starting.
EDIT:
This affects stations I added manually as well as selected from the listing
EDIT:
A retry then works as desired.

Did you all do the basics? Unplug all your gear, router,switch,core etc. Start powering up one by one starting with the router. Clean cache on your remotes. Close your apps on the remotes (IPad,Android,phone) and restart them.
Roon also prefers wired connections.

Except the router and the two of three switches (both Netgear GS108): yes

Using a Devialet 220, Roon on a Nas, IPad pro never gives me problems with Qobuz. All wired and unplugging ALL the the devices once in while.

Did you all do the basics?

Thanks for the reminder, but I always shut down my core over night and when not at home, as well as I did power cycle modem and router on observing strange behavior, as usual…

Ok! After „doing the Basics“ (thanks to fietser

) everything works fine. I already restarted the Core, but obviously the router was the problem.

I too have been having this issue and HAVE restarted everything!

Every time I push play I get maybe 5 seconds and then the dreaded Lost Connection page, then a wait of about 3 mins for everything to fire up again. Has only started to happen over the last week, all of my devices are running uptodate software, router and satellites are all uptodate.

It makes this lockdown (Sydney) harder with no music! Playing through Qobuz directly works but not via Roon.

Report this in the general support section. It Will be seen faster by #support . Start new topic and discribe your system by filling out the form. I am just a user who’s trying to help out.

Probably an update issue. Them, Americanos have a great saying: “If it ain’t broke, dont fix it”. Because not only Qobuz, but roon itself is showing network connection problem. Pretty sad. I wrote to roon official contact form, so that their secretary too gets to know, that their update was buggy. Even more sad is that I have a lifetime roon, so they owe me nothing, if the thing never works again.

i’ve had this same kind of problem, for years now, through all kinds of gear (different cores, end points, networking components). Tidal and Qobuz within roon say there is a network problem, but their own apps run fine. Also tracks I own stored on directly attached hard drives fail to play - just get skipped. Frequently restarting roon will fix it for a few hours.
Still no fix from Roon…

I’ve been having similar issues with Roon on Mac mini M1 and found a reboot fixes the issues for a few days but it arises again and every time requires a reboot. Sounds like some kind of cache or buffer problem that’s reset with a reboot.

After some months of trouble free operation with Qobuz & Roon, I suddenly encountered this issue yesterday. I’ll try a reboot as suggested …

I too am getting regular drop outs from Quobuz from my core via AP and RAAT to ROON Ready streamer. Does not occur from shuffled non Quobuz library items.
Jim B

I’ve had this for years. Both local and streaming files fail to play. Roon pops a message it’s the network problem. But restarting the core fixes it for a few hours. If restarting fixes it, it’s Roon.