I am also suffering from Qobuz tracks skipping & stopping. The issue started to occur approximately 1 week ago, and it is making Roon unlistenable. I almost cannot get through a single song without interruptions in playback. I have checked all connections and internet service and the problem does not seem to be related to those issues.

Is your iMac Core connected directly to the Xfinity modem? There are no other networking devices in use?

If you play to System Output of the iMac instead of to the Auralic is there any change in behavior?

My IMAC connects via my home WIFI network to my Xfinity modem. It is not hardwired as the modem and Imac desktop are in separate rooms. This is the set-up that I have had in place since I started using Roon about 1.5 years ago or so. Up until a week ago, the consistency of playback has been fine. the WIFI network is used to control a couple of other devices in the house (lights, tablets, etc.).
I don’t believe the Auralic is the device associated with the Mac’s System Output. I can check whether changing the device associated with System Output makes any improvement, but my guess is that it will not.

Also, I called Xfinity out on Saturday in order to check everything they could on their end, specifically physical connections of cables, connectors, wall plates, incoming speed and consistency of service, modem, etc. All checked out fine and I don’t experience any other issues with internet, etc. that would lead me to believe that it is a signal/bandwidth issue.

It seems that it is a Roon software issue. I have also tried to log out and back in to both Qobuz and Tidal, and this has not made much of an improvement. I have not tried logging out and then back in to Roon to see if that clears things up. But I have closed Roon down and re-started, to no avail.

Is there any possibility that this is related to a CPU “tax” issue? The Mac is a bit older (probably 7 years in age), but from what I can tell, it should have plenty of space/memory available. Just trying to exhaust all possibilities.

Please let me know of any further suggestion you have as it is incredibly frustrating.

I can check whether changing the device associated with System Output makes any improvement, but my guess is that it will not.

Yes, this would be a good test — Knowing if this behavior is limited to the Auralic or to all playback would be a great data point.

As noted in our Networking Guide, we always recommend that your Core be connected via Ethernet. I understand that worked fine for a while, but it’s possible that some new interference could be causing an issue that wouldn’t be present with Ethernet (i.e. a neighbor with a new networking setup on the same channel, a new networked device on the network, etc.). We can troubleshoot some other options for now, but knowing if Ethernet resolves things would help us narrow things down.

Is there any possibility that this is related to a CPU “tax” issue? The Mac is a bit older (probably 7 years in age), but from what I can tell, it should have plenty of space/memory available. Just trying to exhaust all possibilities.

Can you share a screenshot of the Signal Path?

I’ve noticed this too, but only on certain Qobuz albums. Does it happen with everything you listen to?

Thanks. I am trying to pin that down as well. From my experience, I’d say it drops out or skips randomly across recordings. Also, often times it will skip/drop-out on a recording and then next day, on same recording, will play without interruption. I also have not been able to determine yet if this occurs more often on higher-res files than lower-res recordings…

A post was split to a new topic: Random skipping and random stopping on Qobuz

Dylan, in testing things a bit further this evening, here is what I experienced.

Initially I played Roon to my Auralic DAC like I normally do. After several minutes, I experienced several skips and drop outs to the point of album playback completely stopping. I then switched to playing Roon (same recording, same tracks) exclusively to a secondary system in another room which consists of a small wireless Gracenote bluetooth amplifier connected to a pair of B&W speakers. This connection is basically through my Mac System Output. Up to now, after allowing Roon to play for about 45 minutes, I have experienced no skips or dropouts.! Here are a few shots of signal path for both setups, image|375x500, 50% 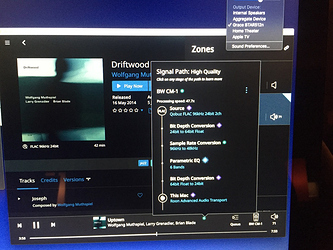 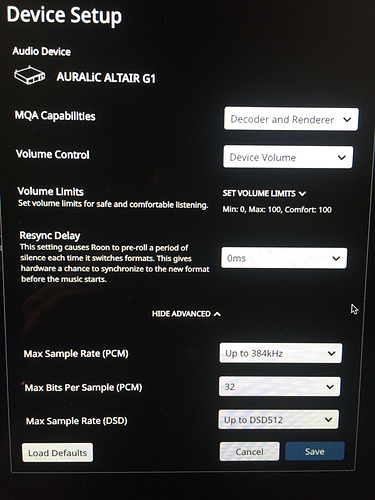 After listening uninterrupted to the Gracenote/BW system, I switched back to the Auralic set-up and, sure enough, started to experience skipping again.

This would support the notion that the problem is being caused by something affecting the WiFi connection from my Core to my modem or an issue with the connection or signal to the Auralic DAC, correct?

I do not have the ability, at least not at this time, to try connecting my MAC/Roon Core directly to my Auralic DAC via ethernet in order to see if the issue occurs during this set up.

What I am experiencing this evening, due to small sample size of testing, may be purely coincidental, But, if not, then we may be narrowing down on the cause of the problem.

Btw, when Roon is playing it represents about 6-8% of CPU.

Any further recommendations at this time?

Thanks for the update, @Brad_Ritz1.

Things look okay regarding the CPU usage, so I agree that this seems to point to networking problems.

You mentioned above that you experience this with Qobuz — Do you have local content as well? Is there any change with local content? What about TIDAL?

Thanks. I am converting all of my music files over from Tidal to Qobuz and no I do not have any local files, so the skipping has occurred exclusively while playing Qobuz. I’ll keep testing on my end and keep you posted. thanks

Dylan, still experiencing significant difficulties with skipping and dropouts. It seems to happen on an inconsistent basis. Sometimes few skips/dropouts, other times very often. Question, is it normal for Roon to be using anywhere from 15% to 130-140% of CPU usage based on what the Mac’s Activity Monitor confirms. I’ve noticed that it seems to jump around a bit although most of the time it is in the 10%-20% CPU range. Not sure if this has anything to do with my track skipping problem, but thought i would convey it nonetheless. Let me know as this problem is really frustrating.

Is the 130-140% range consistent or are they short jumps? If consistent, does it return to normal after a reboot?

Definitely short jumps. On average, it seems to operate in the %15-20% range. However, I may have rectified my problem (knock on wood…). I tried a couple of other steps over the weekend and have exhibited no skips or dropouts since, which is pretty encouraging given how often it was happening previously. I changed a setting associated with my Wifi network whereby it cannot function as a hot-spot. I dont think this was the reason I was experiencing the issues, however. The other thing that I undertook was to power cycle the DAC. I did this a couple of times, unplugging the power cord from the back of the DAC and then plugging back in. Effectively re-setting the unit. I’d be inclined to bet that this move is what made the improvement more so than the wifi hot-spot setting change, although I am certainly not a networking expert. In any event, the skipping/dropouts have ceased, hopefully permanently. Will obviously be keeping an eye on it.
thanks

Thanks for the update, @Brad_Ritz1! Definitely let us know how things work moving forward!