Qobuz tracks 'unavailable' in Roon but available in Qobuz app

I’ve seen this issue referenced for Tidal, but it’s now cropping up in Qobuz.

See screen dumps - Roon firts, then the view from Qobuz. The album is: 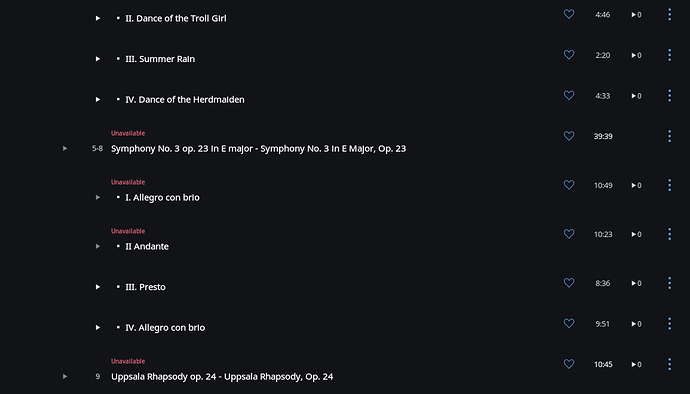 Roon staff - clearly I have rights to play this in the Qobuz app…why not from within Roon. Is their an additional level of rights that Roon is not eligible for or is this a Roon-Qobuz interface/database issue?

We are looking into this. Apologies for the inconvenience here, and thanks for the report.

We’ve identified the issue here and confirmed that this should be resolved soon. Within the next few days the data should update and you’ll be able to play these tracks within Roon.

No need to apologise. Thank you for the VERY quick response. I fully understand the complexities of embedding the Qobuz service within Roon. The fact that you managed this has infinitely enhanced my listening experience and I can’t thank the Roon team enough for this!

OK - just checked again and the problem still exists. How many days should I wait for this?

Can you confirm what region your Qobuz account is for?

I just checked the Alexandre Kantorow album and it is available on my end. Same with the original Alfvén: Symphony No. 3 in E Major, Uppsala Rhapsody & The Mountain King Suite album that was mentioned in this thread.

UK region at my end

Removing both albums from favourites and then putting them back in did the trick!
Thank you for your support.

I just discovered that most Charles Tolliver albums available in Qobuz don’t show up in Roon.

How much is this a problem? If I can only access part of the Qobuz catalog in Roon, I will likely want to rethink this when my subscription renews. If I do a search in Roon I expect to see everything that I get with a search in Qobuz outside of Roon.

Can you share examples of albums that are available in Qobuz but not in Roon?

Are you able to play these albums in their entirety on Qobuz or just a 30 second clip?

Yeah, my apologies. Qobuz only has 30 sec. samples. I had no idea they did such a thing.

I think some labels do not give Qobuz streaming rights, only sale rights, after which the album can be streamed.

Yes - that seems to be the case for some labels eg BIS. They come on to streaming soon enough though.

I’m noticing some albums that used to only be in cd quality are now available in hires on the Qobuz app. I have also confirmed they output in hires.

However in roon, it doesn’t show the hires version.

An example, Peter Murphy. Love Hysteria expanded. I believe any other Beggers Banquet label albums have same issue. When they first were put on Qobuz they didn’t have streaming rights to the hires version but that has now changed for some.

Yes, seeing Gary Numan also only in cd but hires in Qobuz. And have also confirmed playing in hires on the app.

Interesting. I focused on my cd quality Qobuz album that are in my library.

I noticed that a couple would not play. I then went to Versions tab for the album and found a 24/96 version and it would play.

Are you seeing the high res versions under the Versions tab in Roon for Peter Murphy and Gary Numan?

No I’m not finding them in versions.

So after a little digging I found that the hires versions aren’t labeled as such. You find multiple version of Gary Numan showing 44/16 quality but if you check the stream on one of those, it’s playing at 96/24. My dac also confirms this.

At some point Qobuz switched all these albums to the hires version but roon didn’t get updated data yet. I assume this is pulled from Qobuz and not roon’s issue?

Hi, I’ve run into the problem referenced in the thread title twice now. Can’t recall which album it was yesterday, but today Alec Benjamin’s Narrated for You should stream in 24/48 but this version is “Unavailable”, and only the CD quality plays. I tried adding the HD version to favourites and then removing from favourites (as someone found to work above), also adding to library and then deleting … but still “Unavailable”. Can anyone help? Not much point in subscribing to the Studio version if Roon won’t play the higher res streams. Thanks

Does the HiRes play in the Qobuz app?

If it does, contact Dylan (see thread) and he will usually investigate the issue.

I’ve just checked the Qobuz web player and Windows 10 app … and neither list the high res version of the album that appears in Roon, but doesn’t play. So I’m not missing out on something that I could play … it doesn’t exist. But odd that it’s listed on Roon. Thanks for the suggestion @Tim_Chapman.

I was listening to some 24/192 albums today that played without any problem, so I’m reassured the streaming side of things is working just fine.