I can certainly understand that as your post contains a quote from ROON (albeit 6 months old) it s taken as the truth. I wish that was the case. Unfortunately it is simply not true.
I have a limited number of Qobuz albums at this time (45) and none of them contain Volume Leveling data.
Still waiting for @support to respond as well as receive a reply to my email from Quboz.
So far, the silence from both is disappointing.

Qobuz responded to me: ‘Unfortunately we are not planning to implement this feature in the foreseeable future, sorry for disappointing news.’

No, I do not see why Qobuz should deliver something on maybe 5-8 million albums they do not consider important (they want to deliver original mastered material without leveling). If Roon wants to offer this feature they need to deliver the ingredients. Even if Qobuz would send to Roon a database with x-million album titles and the appropriate R128 data, who in Roon would want to update their database with that info? Impossible. I think this call about someone providing all that data at once is too short thought. What might work is to start delivering on incremental portions, as I believe it is done by the streaming companies Tidal and Qobuz on weekly basis. It already takes Roon one day to implement this incremental data into Roon. Therefore the Friday listening of new Albums for me goes with other apps like Devialet Spark or the Qobuz app as Roon is very late with new data. So, imagine how would Roon stem to add the leveling values for x-million albums to their database correctly and timely? For me your request towards Qobuz is simply unrealistic and not fully sound.

Thanks for that. I mainly use Tidal and Qobuz (I keep going back and forth) for roon radio. This makes Qobuz pretty much unusable for that. Guess it’s back to Tidal, where MQA is the lesser evil.

If not Qobuz, then who? Roon? Roon as the answer makes way less sense than Qobuz…

Aside from opinions from ROON subscribers, there are several documented statements from ROON support and Qobuz that frankly conflict with one another.

As a refresher, ROON support, several times in the past 9 months, offered a narrative that can be summarized as follows: Qobuz has a catalog of millions of tracks and is adding Volume Leveling information daily- it is a work in progress.

Qobuz has informed another subscriber that they have no plans to provide Volume Leveling in the foreseeable future.

Yesterday, I received the following response from Qobuz “Thanks for your email. That is no(t) a function we currently offer. I’m going to send your great suggestion to our Dev team now for consideration for a future update. However I cannot provide a timeline for you.”

As a matter of truth, these statements cannot coexist.

ROON support has been recently silent on this, therefore one is left to speculate as to why ROON has historically claimed that Qobuz Volume Leveling is a “work in progress” when it clearly is not.

For me, I will determine my continuing subscription to Qobuz significantly based upon whether Volume Leveling data is provided in the future. I am not holding my breath.
Finally, although my experience with ROON has been overwhelmingly positive, I feel mislead by their statements in this matter. I signed up for Qobuz less than a week ago in no small part based upon ROON assuring subsribers that Volume Leveling is present in some Qobuz tracks, more were being added every day- that it is a work in progress. I believed ROON.

Misinformation is worse than no information. The older I get the more I appreciate the subtle, the fine tuning, the refinement in things and work and life.

Volume leveling done well, as I find Roon does, is one of the refinements that I’ve become accustomed to and don’t want to compromise. If I’d never had the pleasure of using it for years and I probably wouldn’t care. It’s one of those ‘things’ that isn’t fully appreciated until it’s gone.

I too do not plan to continue my Qobuz trial into a subscription mostly because of this lacking. Tidal serves me well via Roon. I know Roon corporate really doesn’t lose anything by me (or anyone) not subscribing to Qobuz.

I wish more attention was paid to the refinement of Roon vs. feature creep but then I and all of us are simply the classic arm chair quarterback, are we not

The plot thickens. Over on Audiophile Style, a Qobuz rep says:

Q: Someone on the roon forum said Qobuz told them Qobuz does not have volume leveling info and had no plans to provide it. Is that the official Qobuz response?

A (Qobuz rep): Nope all the volume leveling info for our catalog should be delivered to Roon by beginning of next month. And all new releases going forward have it.

I think streaming services are subject to the same legislation as the rest of the broadcast industry, so I expect loudness normalisation will come to Qobuz eventually. But I wouldn’t like to guess when. It’s a work in progress across the industry while they work out how to get to -23 LUFS without upsetting too many people along the way.

Edit: Or perhaps I’ll guess ‘beginning of next month’…

ROON support has been recently silent on this, therefore one is left to speculate as to why ROON has historically claimed that Qobuz Volume Leveling is a “work in progress” when it clearly is not.

Based on the posts on Audiophile Style linked to here a few posts back, you may have jumped the gun in accusing Roon of malfeasance. The statements from that Qobuz rep include:

“Nope all the volume leveling info for our catalog should be delivered to Roon by beginning of next month. And all new releases going forward have it.”

“That is correct, this data is only being sent to Roon.”

“This will be added after on Qobuz Application, and will be available on the API.”

Note that the last quote was provided by a second Qobuz rep…David Craff. He is Qobuz Product Manager for Desktop, Web Player and Search Engine. He might just know of what he speaks!!

Now, those statements sound rather definitive. Maybe everyone should take a step back and let the process continue.

I am so glad that I don’t use volume leveling…at all!

I simply reported what information had been provided by ROON and Qobuz (as recently as yesterday). No accusation was made, I just pointed out the contradictions. I stand by my comment pointing to ROON’s recent silence on the matter.
If Qobuz is going to provide the data that is something to celebrate- perhaps they should inform their support staff who state otherwise…
I you don’t use Volume Leveling, why even opine on the subject?

I would never rely on any support personnel to know what is really going on behind the scenes. Support people often complain that they are mushrooms. I’ll let you figure out why.

I comment on topics on which I have something to say.

Chinese whispers and possible confusion on the question by Qobuz support at play here.

Qobuz are now analysing their catalogue and this information is filtering down to the Roon servers as part of the on boarding process.

Also Roon are definitely working on using this additional data to provide digital attenuation when Volume Leveling is enabled.

It’s on the roadmap, it’s work in progress… When will it be available to us, pass? However, I’m sure Roon will post once they have something definitive to say.

It’s on the roadmap, it’s work in progress… When will it be available to us, pass? However, I’m sure Roon will post once they have something definitive to say.

Word from ROON would be most welcome.

Thank you for taking the time to join the conversation.

The statements from the Qobuz reps include:

“Nope all the volume leveling info for our catalog should be delivered to Roon by beginning of next month. And all new releases going forward have it.”

“That is correct, this data is only being sent to Roon.”

“This will be added after on Qobuz Application, and will be available on the API.”

Note that the last quote was provided by a second Qobuz rep…David Craff. He is Qobuz Product Manager for Desktop, Web Player and Search Engine. He might just know of what he speaks!!

I’ve confirmed that new releases (the few I checked) do in fact have volume leveling data in Roon. It’s too bad Qobuz support isn’t on the same page. I replied to the response I received and included the AL link… 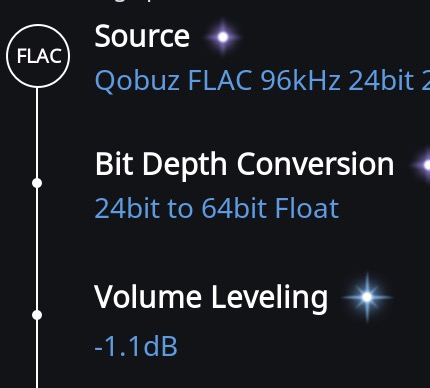 Well there you go! This isn’t really a problem we have to worry about anymore. Qobuz is doing what needs to be done and it sounds like all albums will have R128 data before the end of the year.

Hey everyone – we were not ignoring this request, and we actually spent a bunch of time getting this right with Qobuz before we released our integration in Roon 1.6.

In order for volume leveling to work in Roon, Qobuz needs to analyze each file in their service and provide the leveling data to us. This is a big project, and we know that Qobuz has been working on processing their music catalog over the last year.

After seeing this feedback recently, we did some investigation to get a sense of how much of the Qobuz catalog includes volume leveling data. And… we found a bug

So, as of yesterday we have a fix live on our servers and volume leveling data should again be used in Roon when it’s available.

Note that it may take some time for these changes to filter down to content that’s already in your library – you can always select “Re-Identify Album” from the Edit menu to retrieve updated metadata from our servers, but this will happen automatically for your library over the next few days.

If you see tracks outside your library that do not include volume leveling data, it means that Qobuz has not provided us leveling data for that track. As mentioned, they are working through their catalog and you can feel free to reach out to them directly for updates about their progress.

Thank you for your efforts and updated information. Much appreciated!