I have a question abut LS50, not Roon related, but maybe you can clear something up.

KEF specs the LS50’s amp requirements at 25-100 wpc. Yet in the an article about Schiits forthcoming Vidar amp, DARko audio makes the statement -

“Buy two and connect them with balanced XLRs to a pre-amplifier for a pair of monos that’ll drive 400wpc into 8Ohms. KEF LS50 and ELAC Debut B6 owners, are you paying attention?”

Mine do. Too much power isn’t that big a deal unless you try to reproduce stadium levels and kill the speakers. Underpowered amps clipping is a bigger deal.

Correct. More headroom of power to speakers is better in terms of overall SQ. I had to make expensive swap to get rid of under-power amp to my KEF Ref speakers. They are now lying around without amp. Or i will sell them.

So far i m very happy with my new toys - “LS50Ws” (Wireless/Active/Powered what ever name suits) are powered with (A) 30W/Ch powering tweeters and (B) 200W/Ch power for Mids/Lows.

I have mine hooked to a Peachtree Audio Nova 220SE. If you can make the mental leap to seeing the volume knob low, there is no issue. And they sound AMAZING. Sound is always a personal thing, but I enjoyed the sound of these over some of those new high end Focals I heard at a demo event at a shop here in town. People who say they are hype? I couldn’t disagree more. They are consistently rated highly because they are damn good.

So true. I had a 220se and before that a 125se. Sensational amps and sensational company. I can only imagine they thought it was great marketing to have it go full blast by 9’oclock with 85dB efficiency speakers and 8’oclock with my former 92dB speakers. To make it look so powerful? But they had a lot of complaints for this excessive gain and very limited volume control.

I haven’t seen these comments with the new line which is great news. Great all round positive reviews for the Nova 300 also.

Honestly it doesn’t really bother me that much. I have seven kids and a really small listening room so my headroom is pretty limited. Unless I hook up my Sennheiser HD600s which let me exercise the full range of the volume control.

Yeh it didn’t bother me so much in terms of headroom. Moreso limited fine volume control steps. But as you said, maybe be just a mental thing.

No argument. It’s not a perfect amp but for the cost it is pretty close. Now the speakers…I have no problem calling those perfect.

Mine are hooked up to a Marantz PM8005 (2x70W).
It feels like I can blow the windows out of their frames if I go more than halfway open

Hello folks
Cant help wondering what these puppies would sound like in my kitchen which is a good size rectangular space. Potentially displacing a Bluesound Pulse Mini which is good but i’m missing true stereo and something a bit more refined. Liking the all in two box approach of the KEFs as well as the user feedback about the great sound.

Hopefully Roon Readyness and/ or use of a SOTM SMS-200 for example would negate the need to worry about the KEF app etc.

Problem is for reasons of practicality/ space and two rampaging 5 year old kids (and friends) the speakers would be pushed back and close to or literally hanging off the wall.

What are you thoughts would this be a crime against humanity and more importantly, terminally bad for SQ?

I’m aware its possible to use foam plugs to try to control the bass.

The LS50W’s have DSP built-in so you can set-up the speaker in ‘wall’ mode. You can set this from the back of the right speaker or, for finer control, use the app and you can tell it how close to the wall it is.

KEF have designed the LS50W’s for a range of listening scenarios and up against a wall is one of them. Incidentally, if you end up choosing to put the LS50W’s on a shelf AND up against a wall - the DSP also has settings for that too. Don’t worry about SQ! The ONLY issue I had with trying my LS50W’s right up against the wall was that they sounded a tad brighter (curiously it wasn’t the bass I had a problem with). Trimming the treble (via. the app) sorted that out.

BTW, the app is not all that bad to use since the last update. It’s not brilliant but neither is it as awful as it was before the update.

The DSP in the KEF has been implemented extremely well (at least, to my ears and having played around extensively with integrating it into my room and with a subwoofer) so you can use it with confidence.

Thanks Rik appreciated that helps

Have just taken the plunge ex display white gloss (im told never used) and 200 off. From the Sevenoaks chain.
Just got home to try them out and the parents in law are here… grrr

Sevenoaks; I presume you are in the UK then? Is anyone selling them with a 5 year warranty? I have read too much about unreliability for this particular model (Wireless version not passive) to take the plunge at the moment.

Hi
Yes i’m in Kingston upon Thames - got it from the Southampton branch so bit of a drive. They had it in stock ready for collection basically per the website so i was happy to travel within reason. Used their private listening room to good effect.

i asked about the guarantee - they’re an authorised dealer and that means you get the full warranty same as for all the other authorised dealers of which there are several. They confirmed the 5 years after checking and they were a bit surprised as its better than the norm.
I will follow up further but the paper warranty doc in the box states ‘KEF products purchased from an authorised KEF dealer are covered by a warranty’. No mention of term. I know i have a verbal agreement so good enough for me at the time.

Thanks, will look into this as I need some potentially Roon Ready speakers for a bedroom.

which setting would one use with the speakers on a credenza? on a desk? on stands? 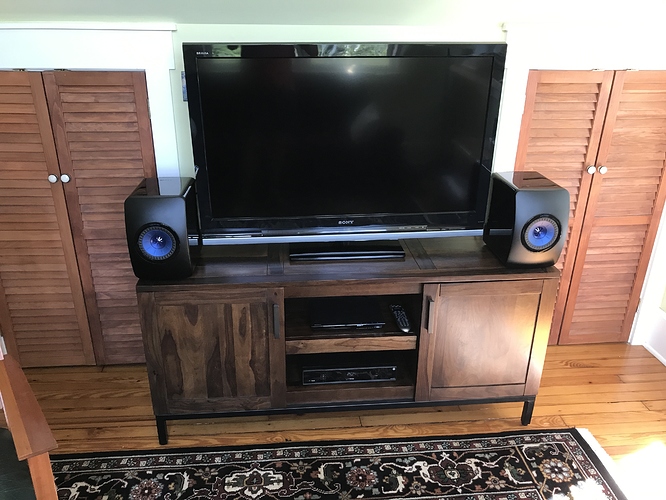 if it were me, I would start with desk and see if I liked it, but ultimately, I would end up trying both and see which one I liked the best.