Roon signal sent to Bluesound Node 2i via ethernet then to Beresford Caiman II DAC via optical.

When viewing Activity Monitor on iMac, it shows, even after a Roon reboot, that the RAAT server is not responding (appears in red).

Is this a cause for concern? 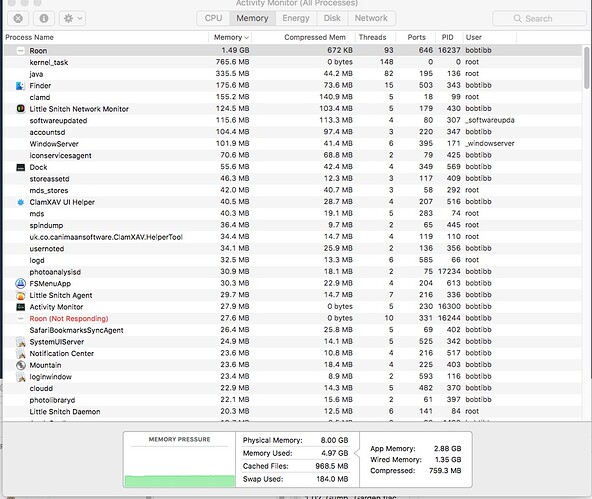 Following up on this thread, I wanted to see if you were still running into issues with RAAT server being unresponsive?

If so, lets have you perform a RAAT server refresh. You can generate a new RAATServer instance on your device by following these instructions, but please be aware that this will reset your Roon Settings → Audio Tab to factory settings and I would advise making a backup of any custom DSP settings you have:

Let me know if your issue persists after the above 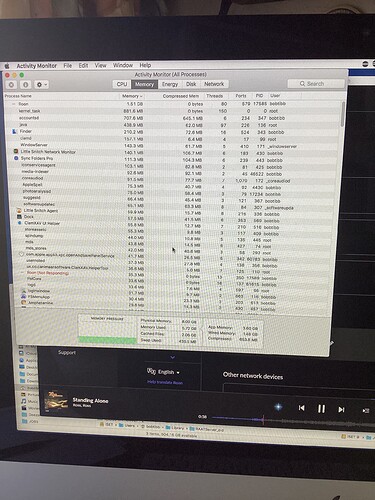 image1920×2560 655 KB
Hi Ben
I did as you suggested and the RAAT server functioned for about a couple of minutes then became unresponsive according to Activity Monitor as Application not responding and appears in red.
Oddly…as you can see from the screen shot, Roon proper is playing music to my local iMac attached DAC. Plays to my Node 2i also via ethernet! So, what is actually occurring Ben?
Thank you
Bob

My apologies here, are you experiencing any issues with Roon? Or, are you just seeing a lack of response from RaatServer via your activity monitor?

Please provide more specific details into the issue you’re experiencing, and what you are doing at the time of the issue. The more specific your steps to reproduce the issue are, the better we’ll be able to narrow in on a solution

Hi Ben
Occasionally I get messages saying that Roon is “loading slowly”… especially at the beginning of a listening session, when I have restarted Roon. Also, in Activity monitor, Roon proper starts as showing around 1.5GB of memory being used…as a few days pass, this climbs to around 3GB of usage and simultaneously the Roon RAAT Server is using around 30MB of memory but is shown to be unresponsive and in ‘red’. The system on the iMAC (running Sierra, and thus 1.8 Legacy) has a total RAM of 8GB. Renaming the RAAT as ‘old’ and then restarting recovers the RAAT but it only appears to be running for a short period, then when checking in Activity Monitor, it has returned to red and unresponsive, Is it feasable that RAAT is functioning in a fashion while at the same time appearing to be unresponsive in the Mac OS? Have others reported a similar issue Ben? Roon’s memory usage reduces to 1.5GB after restart or reboot of iMac but over a couple of day’s usage, climbs to around 3GB again…and requires a reboot…otherwise I think the system would run out of steam! I only run Roon at times when not using the iMac for other duties.Connected via ethernet and the router is connected to the world via fibre (TalkTalk). I look forward to your reply and possible explanation Ben. I have around 70,000 song files that live in the Roon database on an externally-attached and powered usb drive. Thank you for your assistance. Bob

Thanks for the information. Ideally, we’d like to enable diagnostics to take a deeper look into things, but it looks like its been offline for a bit. Would you be able to keep it online so we can get diagnostics?

Outside of that, a good next step would be to make a backup, reinstall 1.8, and restore from your backup. Here is more information on how to do this:

Hi Ben
I will crank up Roon in the morning and keep it active so that you can run your diagnosis software. When I “lost my audio devices” recently, one of your colleagues asked me to reinstall 1.8, which I did. This re-established access to my audio devices but the RAAT became ‘unresponsive’ shortly thereafter. So a reinstall did not solve the issue…ie using ‘old’ suffix on both roon and raat. I notice that over a period of a couple of days useage, the Roon app slowly eats memory……is there a reason for this? Thank you for your assistance Ben. Bob.

Thanks for letting me know! In the meantime, we also noticed you’re currently running ‘Little Snitch Network Monitor’ which has caused hiccups with Roon device connection in the past.

Within Little Snitch, rules are in place to allow Roon access, both incoming and outgoing. The activity monitor is still showing RAAT to be unresponsive after about half an hour if playing music, after a reboot! I need to keep Little Snitch activated so… if this program affects Roon behaviour… is there a workround and could it be something else affecting RAAT? Thank you Ben. Bob 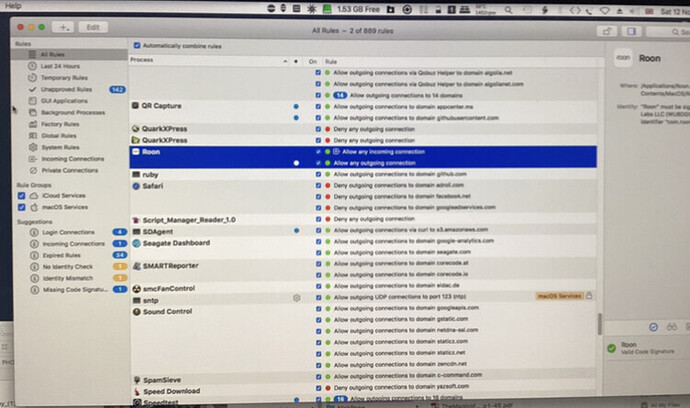 Got it, thanks for the information. It’d be good to test it out running Roon outside of Little Snitch, even temporarily disabling it, but if that is absolutely not an option, I would look at doing a re-fresh on setting up the permissions for Roon in Little Snitch.

I would also check your system firewall settings to verify that both Roon.exe and RAATServer.exe have been added as exceptions.

If you’re still experiencing issues after this, let’s load a fresh database to see how things operate:

Thank you for pusuing this issue with me Ben.
Just to be clear … I have temporarilly disabled Little Snitch to no avail.
i do not use a firewall on the iMac, this is not enabled.
I have renewed the database by both using the .old trick, and by downloading a new Roon app from your website (legacy 1.8), and have just updated to the latest build on both the Roon Core and remote apps on iPhone and iPad.
If I reboot Roon, the RAAT server runs for a short period but inevitably stops responding, using around 30MB of memory. Roon app, uses around 1.3GB of memory but over a period of a couple of days, this increases to over 3GB of memory if I have not needed to reboot!!
Just after a reboot, for around 30 mins or so, while using Roon (and via iPad as control), any song will skip after a few seconds onto the next one in the queue …. So I reboot again, but also use Free Memory app to release any memory that gets caught up in Roon… this helps with access to the Core, which then runs smoothly until the requirement in Roon for more GB of memory means I ultilmately need to reboot it.
Even rebooting the router, iMac and Roon does not clear this Stuttering issue and the reporting of the RAAT not responding.
What I don’t understand is that playback occurs at all, considering RAAT is showing as unresponsive in Activity monitor. Do you think that Activity monitor is fibbing to me? Is this a memory hogging issue? Bob.

Thanks for the information. This time around, let’s do a full refresh on your Roon databases:

Let me know if things run more smoothly after this

Hi Ben
Thank you for your response.
May I ask, have you adjusted the 1.8 Legacy software in some way since the last update?
The reason I ask, is that I have done a complete refresh by doing as you suggest and downloading a fresh version of 1.8 and then doing an update to the latest version. There was no apparent gain, in that the RAAT was still quitting after a short period.
I will try again but unless there is a corruption going on somewhere, I don’t see this as being the solution. Will you return my message asap so that I know the reasoning behind your suggestion. Thank you Ben. Bob