I was trying out the Radio functionality but only wanted it to work from a pre-set group of formats, as defined in a Focus setting saved in a bookmark. However, regardless of where/how/when I apply the filter, Radio pulls from the entire set of unfiltered tracks, i.e. those comprising the whole library

Am I missing a trick or is this “by-design”?

I just noticed it too when trying to do something similar.
I don’t believe this is intentional.

Just select the albums/tracks you want to seed Radio with (to select use right click or long press, once something is selected you can select all with ctrl-a or the top left menu) then hit Play or Play All to bring up Pawmasher and pick Start Radio. You will see the Radio seed in the right hand window under “Playing Music similar to”

Thanks @andybob, I guess that’s the way to do it.
Although I have to say it’s not very intuitive. If I’m “focused” on a selection of songs, why should there be a difference in selection between “Play now” and “Start Radio”? Especially when above these 2 choices it says “X out of Y albums”.

I think of Focus as a browsing function and selection as a way of giving Roon instructions about a group. Radio wants to know what group to seed with, selection is one way to tell it. You can tell Radio to use the whole of a Focus without selection using Play All/Start Radio.

Because they serve different use cases – Radio always means “Play more like this”, whereas Play means “Play this content specifically”.

Generally speaking, content with a defined order is added to the queue – this includes albums, playlists, or content in a browser that you’ve multi-selected and played.

Content without a defined order, like a genre, an artist, or everything in the browser (meaning, using the Play All button), gets shuffled. The experience is very similar to using the Radio feature, but only content you’ve explicitly selected is included when you select Play.

Hi @mike,
I understand what you’re saying, but I still think it’s a little confusing to users. Consider this screenshot: 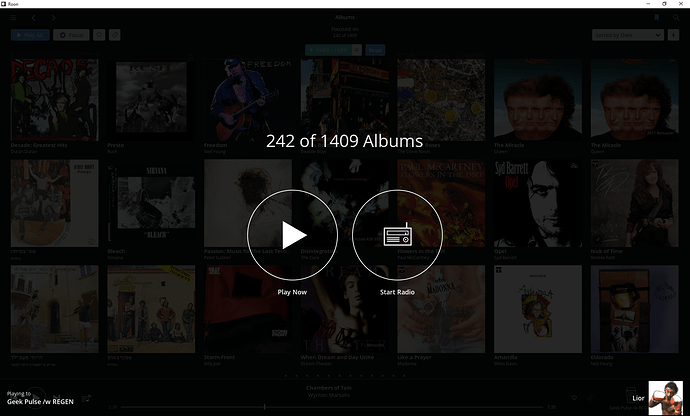 In this example I’m focused in the browser only on albums released in the '80s. When I click “Play All” without selecting anything I get this prompt with the title “242 of 1409 Albums”.
Because it’s the title of the 2 options, Play Now or Start Radio, the user assumes the selection of 242 albums will affect either choice. But what should happen to Radio in this scenario? If the answer is that it would play songs similar to the songs in the '80s albums that would make sense to me, but from what I can tell it just plays a radio of “Your Library” (which unfortunately means songs from just several albums Roon selected in rotation, but that’s another issue).

I agree - this is all far from obvious. So in other words Radio always picks related tracks from the entire library, regardless of how you seed it?

I agree that Radio in this specific context is ambiguous.

The choice also makes sense when you select a single song, or a single album – play the song or album, or play music that’s similar?

If you use Focus to narrow your collection down – say to Bop from '63 - `65 – maybe you end up with just a handful of albums. In my collection, I end up with 5. I would argue that again the choice is sensible. Do you want to shuffle these 5 albums, or do you want to play similar music? In this example, Radio played some Sonny Stitt, some Coltrane, and some Monk. I’ll take it.

Now, if you’re focused on 242 albums, I can tell you that the interface is going to be consistent with the examples I described above, but right now the Radio algorithm isn’t sophisticated enough to do something sane. In fact, I’m not even sure what that would be. I guess if you’re Focused on the 80s, it could play play mostly 80s music, with a little late 70s and early 90s thrown in.

The point is, we don’t consider the Radio algorithm to be done – it’s a good start, but I think it could be a lot better and putting in the effort required to make that happen is on our roadmap. We could have made some arbitrary call about which of the examples above make sense to show the button, but the thinking was that it’s clearer to be consistent.

Radio is always going to make a best effort for whatever you throw at it, but you’re absolutely correct that right now there isn’t a lot of daylight between “play music similar to 242 albums” and “pick randomly from my collection”. Hope that makes sense.

Thanks @mike. I agree that my example wasn’t very good, but I wanted to make sure I got the principle right.
As I understand, when focusing by some criteria, there shouldn’t be a difference between selecting all that’s in the browser and clicking “Play” -> “Start Radio” vs. not selecting anything and clicking “Play All” -> “Start Radio”. If this is true, and I now realize it is after doing an experiment with a much narrower criteria, then I have no issue

Having said all that, I agree that much more work is needed on the radio feature