Radio not playing at end of playlist

I’ve seen several posts like this but though they were solved, I didn’t know what the solution was. It used to be that this would only happen sometimes. Due to a mRendu issues, I switched from my mRendu to a Sonic orbiter and now this happens basically 100%.

When playing a playlist, the section about the ‘radio’ is enabled and it says radio set to start in 45:00 minutes (or whatever the time to end is) but then nothing ever plays. This happens with my own files or Tidal files, though if I play with it enough I can get the radio to start after a local file is played. I’ve even used the replay function to keep music playing (trying to drown out city noises at night) and it has stopped playing.

This is rare but it does sometimes stop playing in the middle of a play list, this isn’t a big enough thing to be an issue, just wanted to stated it. Say I have a 10 song play list, it has stopped after the 7th. Then I’d push play on the 8th and it would start right up again.

All devices in question have the latest software and all devices are wired up with new BJC cat 6 cables. Synology NAS to Sonic transporter to Sonic orbiter to my systems. I’ve been playing with it for a week now so thought I’d ask others.

There’s some subtlety here that we’re working on, but right now Radio only works for tracks in your library.

Radio is based on the last track in the queue, but keep in mind that a TIDAL track can be part of your library or not.

If the last track in the queue is not in your library, Radio won’t start. This is a limitation we’re working on resolving, but we’re not there yet.

If you’re seeing this repeatedly, try this: when the last song in the queue is playing, click the album cover in Now Playing.

Let us know if that jibes with what you’re seeing, and if not we can take a deeper look.

Mike, Interesting to read for me because I often observed also no radio start or no start of „play genre“ or „play artist“. My gut feeling assumption was also looking for dependencies if the title, artist or genre is in the library or not, but I was not really convinced having found the real root cause. So I used to skip using the radio or „play …“ function because of missing reliability - may be caused by my personal set-up. Who knows?

I‘ll re-check and come back on next opportunity.

Depending on your way forward and solving time may be you should think about (temporarily) re-naming the button „Radio „ to „library radio“ ?

Like many features in Roon, (Focus, Discover, Tags, etc) Radio has always been based on your library.

We are hoping to improve Radio to go outside your library in the future, and there are a few other known issues that we’ll be resolving once that work goes live.

For now, feel free to let me know what you’re seeing here – if there are bugs we can take a look:

I often observed also no radio start or no start of „play genre“ or „play artist“. My gut feeling assumption was also looking for dependencies if the title, artist or genre is in the library or not, but I was not really convinced having found the real root cause.

As you can see in the picture below (sorry German UI, but I instantly decided to document by screenshot) I focused on Label „MDG“. Pressing the „play all“ button did not start playing anything out of the focused items - but: after manually selecting one (or more albums) brought up another „play“ button in the top line above the regular focus menue and fortunately this works.

Do you have any idea what‘s behind?

See pictures below: the third picture has been created after the observation for demonstrating purposes, please ignore the bottom line (current play) information -
Pic 1: focus and press „play all“
Pic 2: nothing starts (not functional)
Pic 3: manual selection brings up the functional „play“ button 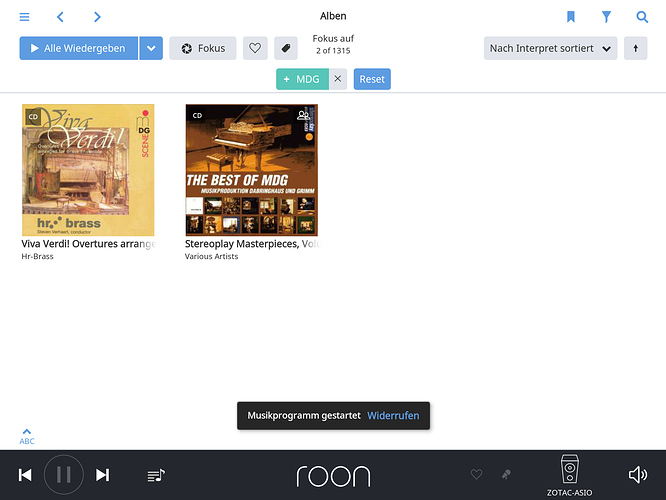 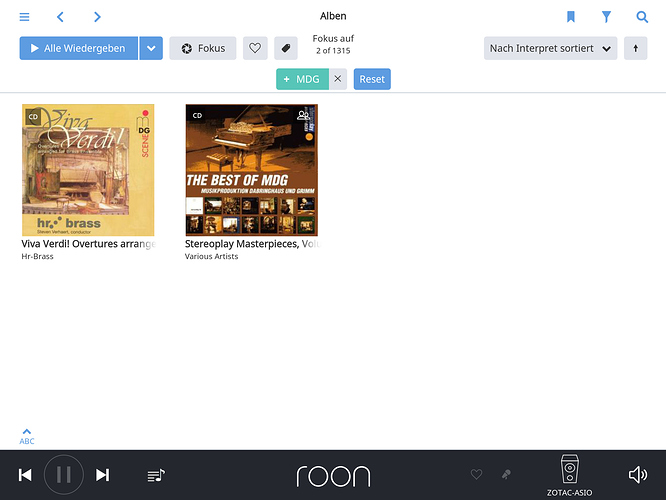 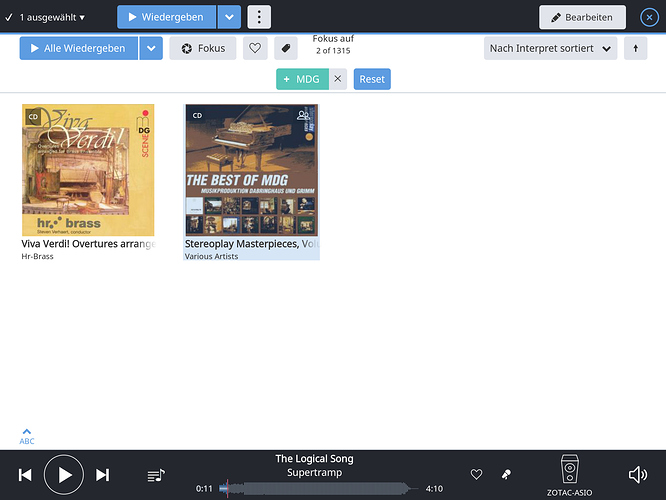 the former example was on my iPad - the following from the iMac:

Sorry for the delay, the holiday hit me earlier than expected. I am seeing what you pointed out wrt to my last song not being in my library and the +add to library button being available.

I don’t remember this ever being an issue before but I just got a set set of speakers and admit that my listening habits have changed quite a bit as a result (I’ve never listed to my stereo so much before).

Works so much better now!