Tried more things - Storage is now a USB 3 HDD into ROCK NUC, no NAS involved now, I’ve also taken everything non-essential off the network. Still getting dropouts causing random stops with only four endpoints. I’ve attached another logs file. 1409 on Feb 14th is the place to go.
Nick_Walker_Logs_Feb_14

Original Post:
I’ve been building/ expanding a Roon multi-room whole home hi-fi setup according to cash availability and Roon community recommendations for three years. Not surprisingly random stops have featured regularly the whole time. Yesterday I reached my Roon endgame, it’s still happening but I have run out of stuff to blame. Over to you guys …

Storage:
1072 albums on Qnap TS 251+ NAS network share, no streaming services. The NAS is under no strain whatsoever, the CPU and RAM never go above 40%.

A BT Wholehome MESH four-disc system deals with all the Wi-Fi.

The Core is Ethernet connected direct into a router port i.e. not into a switch, as is the NAS.

There are no IP conflicts.

This network measures as rock solid, absolutely no not-spots, and no issues running 4k video from the same NAS to all areas, bandwidth would seem to be adequate.

No neighbours or Wi-Fi interference. Two of the four Ethernets on the router are expanded with an unmanaged switch; the other two serve the NAS and the Roon Core.

The attached logs have all endpoints running, but the random stops occur regardless of the number of concurrent endpoints, although more than two appears to be (but is not proven to be) the rule.

All connections and cables have been checked and double-checked. 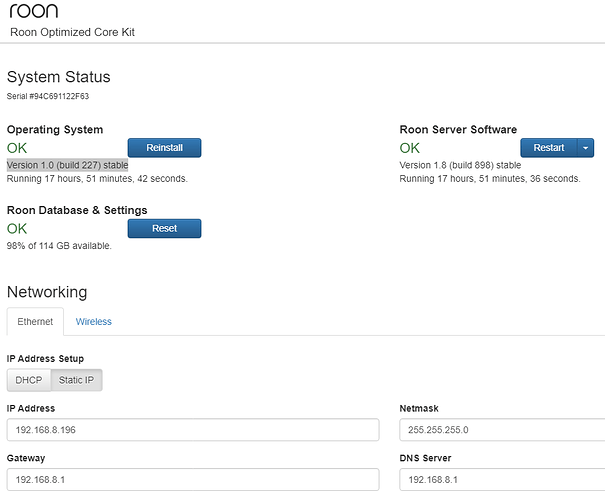 does this happen only when playing to multiple zones or single zone playback too?

When we set out to create Roon, we felt very strongly that users should have access to honest and precise information describing how their software and hardware devices are performing audio playback. We also felt that great audio hardware should be...

wifi is NOT a full duplex connection and will if pushed doing grouped zones with some on wifi be a likely place to find issues. wifi interference regardless of mesh or whatever is highly likely but more so if each AP is not backhauled via ethernet.

Why is Roon so demanding of Wifi Roon Software

I recently have been taking some advice on another thread about getting Roon to work in my upstairs office. I don’t want to go into the details as it is all in the other thread. To sum up well it is not that easy is it. I am even thinking about giving up on the idea and just using the native Tidal app, as it seems to work . I am a bit of a Roon fanboy if you like and this is not aimed as a dig at Roon but I need to try and understand what makes it so complex. It appears Roon needs to be hard…

Hi Mr Fixit, I’m grateful for your help with this, I do enjoy this stuff but it’s been a long three years …

<<does this happen only when playing to multiple zones or single zone playback too?

Just multiple zones, but there’s a maddening lack of logic or consistency going on. It is not just related to the number of concurrent endpoints, I really wish it was! My instinct has been to improve the network and then simplify everything else. I’ve gone from a mix of Windows, Chromecast, RoonReady and Ropieee endpoints to just Ropieee and RoonReady (the chromecasts are in a drawer). My network three years ago was a mix of Ethernet, Wi-fi and Powerlines with a second router as an access point. It is now Ethernet with a couple of switches, MESH Wi-fi (4 disks for a 2000 sqare metre house) and just the main router (the router and Powerlines are in a drawer). I’ve had the core on many different and various machines, it is now a ROCK NUC.

Yesterday I got four hours with no stops running nine endpoints, followed by three stops in one hour running four.

I get that this is probably network related, but I have no neighbours near enough to effect my Wi-fi, my MESH gives a banging signal everywhere and the core and storage are not on the switches. I just can’t simplify it any more.

Sorry for hitting you with my Roon life story, but I have no idea where to troubleshoot next, and I have invested sooooo much time, effort and money on this …

The signal paths was a good call, thank you. I have to have volume levelling at all times or my wife shouts at me

. There was one endpoint with DSP but it was not one of the four running during the three stops. I confess the signal path is an area I haven’t persued much, any tips on that would be very welcome. 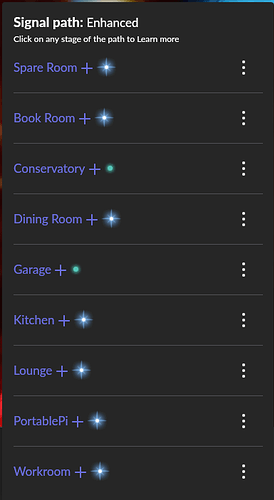 <<each AP is not backhauled via ethernet.

I don’t know what this means

WiFi is just hit or miss…cell phones, microwave, lighting control, ac motors and wireless telephones can all cause drops on WiFi. The issue with so many endpoints is that all playing just takes one to disrupt the signal if it drops for a second.

Not sure if you can group them all as airplay and try that. The issue as I see it is that RAAT needs to constantly clock everything AFAIK and if one drops the ball it causes the whole lot to stop

Backhauled with Ethernet means every disk as you call them has an Ethernet connection.

Okay cool, thanks - two endpoints are backhauled from the MESH disks, I’ve stupidly been calling them wireless.

I’ve had a look at the logs, looks like the best info there is “too many dropouts”. We knew that didn’t we …?

Cheers for your help.

Wow 9 zones in a group is really pushing the friendship

Haha I know! But tbh I have never expected all nine to work concurrently for long. Up to five, however, I would expect to be solid once all the usual suspects have been eliminated.

I don’t know how to interrogate ROCK to find this out.