Is this occurring for all endpoints?

Router is also attached via Ethernet to a Sonos Boost. The Sonos system operates via Sonos Net to a zone containing thress pairs of Play1 speakers and another zone with a Sonos Connect Amp powering two Thiel CS2 2 speakers.

I have not been playing tracks from the SSD all that much compared with streaming from Qobuz, so I don’t believe I’ve experienced the skipping and dropouts from the library. But I know it’s happening via Qobuz streaming and Roon Radio. A song will que up, and start to play and then suddenly it will skip to the next song. If I go back into the que and try to play the skipped song directly, it plays fine. Also, occasionally, a song will be playing and the song will suddenly stop in the middle of the song. If I hit the play button, it’s starts right up again. This all happens randomly.

What else can I tell you that would be helpful? 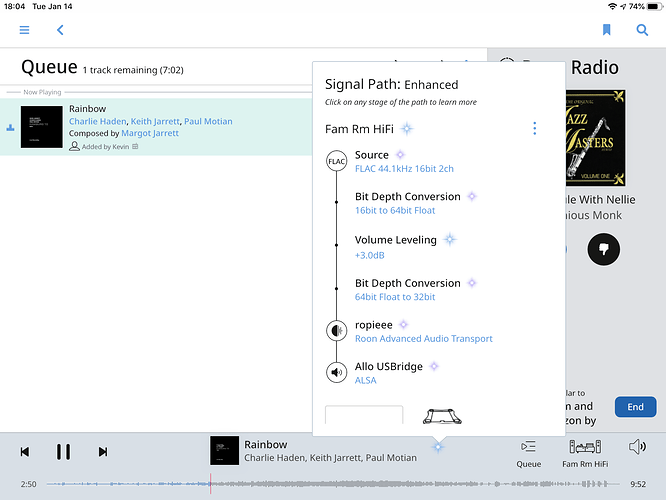 Thanks for providing that additional information. Based on the info you have provided, this could be a networking issue, so let’s take a look in that regard.

What is the router model that you are using here? Can you confirm it has the newest firmware version?

As a test, can you try outputting to the Nucleus “HDMI” zone? This would limit the network impact and would be a good data point if the issue is also occurring on HDMI. You don’t need to have anything actually connected to HDMI, just verify if the track abruptly stops or the seek indicator stops moving.

Router is Netgear R6400 and it has the latest firmware. I check for firmware updates regularly. I can also say that the problem of drop-outs on the Sonos system didn’t occur before I added Roon to the system. I am in doubt that it is network related. When the internet service slows down due to Comcast being…well, Comcast, then we not only have issues with Roon, but also with other devices on the network such as computers, phones, iPads, etc. and if it is a slow connection, the way Roon drops out is different than the random skips and stopping that I am describing.

Please note that the dropouts and skips are COMPLETELY random. It not like I can force it to happen. So you want me to just turn off my other zones and just wait for hours or days for the problem to occur? Guess I’ll have to listen to a lot of vinyl in the meantime, eh?

Could you please clarify?

Oh, and the problem doesn’t seem to happen when streaming Live Radio.

Correct, you would be playing the the HDMI zone in the background while you can still use your other zones as expected.

So you want me to just turn off my other zones and just wait for hours or days for the problem to occur? Guess I’ll have to listen to a lot of vinyl in the meantime, eh?

Not quite, as I mentioned above, you can feel free to use your other zones, and in fact you don’t even need to check the HDMI zone, just let me know once it’s been running for a few days in the background and I can check for any hard stops in logs.

Knowing if the HDMI connection has issues with playback as well would give us a good data point and would allow us to eliminate some variables. I suggest that you start a long playlist of local content on repeat as the first step in the test, if local content works as expected on HDMI, we have made progress in narrowing down the possibilities.

Playing library tracks on HDMI. It stopped once mid song and it just skipped a couple of songs.

Thanks for letting me know. I have activated diagnostics mode for your Nucleus and what this action does is automatically upload a set of logs to our servers for analysis.

I’m looking over the recent logs and I’m not noticing any dropouts of unnatural stops on the HDMI zone. it looks like you had Roon Radio turned on and it failed to get a new track from Roon Radio due to networking issues though.

Just to confirm here - have you seen this behavior for your local library tracks occur on the HDMI zone or was the issue only when you had Roon Radio turned on? Separating these two aspects is an important distinction.

Thanks. I can’t answer the question at this point.

I’ve now set the HDMI to play shuffle from my cd-ripped racks on the SSD in the Nucleus+ In a loop. So it won’t be using Roon Radio. Let’s let that run for a few days and see how it goes, OK?

I can tell you that it has definitely happened on Roon Radio before (before activating HDMI), but not on live radio.

Let’s see what happens. If I catch a skip or a stop fmom downloaded tracks on the SSD, I’ll let you know. Let’s touch base in a few days if that’s OK.

Thanks for modifying the test to the above constraints. Sure, we can discuss on Monday once we have more log data available, please feel free to let me know timestamps if you notice anything occur when playing local tracks over the weekend for either HDMI or your regular zones. Thanks!

Well, the HDMI output playing strictly from content on the SSD hasn’t skipped a beat. On the other hand, playing on my Sonos system from a mix of local content and Qobuz via Roon Radio has been having quite a few hiccups. Often now when the song changes, Roon has trouble getting all the Sonos speakers in the zone to start up at the same time…they are in sync, but with a song change, they all go out for a moment then slowly come back on, one speaker pair at a time. First noticed it in the 4-5pm time yesterday, and it’s been happening quite a bit today (try any time after noon today). And it happens with local and Qobuz content.

Didn’t ever have much of a problem with Sonos before adding in Roon.

Thanks for confirming the HDMI zone is still working as expected.

The Sonos system is set up on the Sonos net, not on WiFi via the router

I suspect that SonosNet might be playing a part in this issue. Would it be possible for you to temporarily try connecting your Sonos gear via WiFi/Ethernet instead of SonosNet?

Yep…can try that. Likely won’t before few days as we have friends staying with us through the weekend.

OK, I reconfigured Sonos to run via WiFi vs SonosNet. Right out of the box, Roon stumbled with a Qobuz playlist that had performed flawlessly via the Sonos app on my iPad. But after one or two stumbles, things now seem OK. Will try it over the next couple of days and let you know. I reset everything…all the Sonos gear, the Nucleus, the Sonos app, etc. so it’s basically a fresh start. We’ll see how it goes.

Do let me know how the system is after a few days of testing on WiFi, thanks!

Seems to be working well. Thanks for hanging with me while this got sorted. I’ll let you know if I run into this issue again, but I consider it solved. Thanks for suggesting I drop Sonos Net. That seems to have been the problem.

Happy to help! If you experience any further issues with this behavior do feel free to let us know, reference this thread and we can open it up again. Until next time, take care!