I’ve managed to get a 2gb Pi 4b, very hard to come by in the UK at the moment. Is that enough Ram to use with Roon as endpoint and Ropieee software. 4gb and 8gb pis seem to be impossible to purchase.

Yes. 2 GB is fine for Ropieee. It’s a very light piece of software.

Thanks for answering that for me, appreciated can I ask do Roon have a minimum or advised specification for the pi 4b would I be better buying a larger memory one when they become more available or isn’t that necessary?. Do a lot of folks run 2gb 4b’s?.

Roon doesn’t specify minimum specifications for an RPi 4 as they don’t devise RPi specific software. I use a 2 GB RPi 4 and have never had a problem running Ropieee.

It doesn’t make sense to buy a RPi for RoPieee with more than 2GB RAM.

Piling onto the folks saying you don’t need much RAM on a raspi for streaming. The smaller RAM configurations will also run slightly cooler. Not that running temps are a worry. I have 4 total that run in cases with no fan without issue. The hottest one runs around 52c. Far bellow the 70c mark where CPU throttling cuts in.

Tried a 3B (1GB) briefly. Seemed to work fine. Same issue with new PIs here in Germany. Want to try a Pi Zero

(Hifiberry OS). Pi Zeros you have chances to get one

FWIW, Here’s DietPi on a 1GB RAM Pi 4B. You can see how much RAM is available. You will have no worries using a 2GB Pi 4B, and as the others have stated, there’s no advantage to more RAM.

NOTE: I was unable to grab a screenshot of RoPieee with the new build that doesn’t allow SSH access. However, I would suspect the numbers to be very similar. 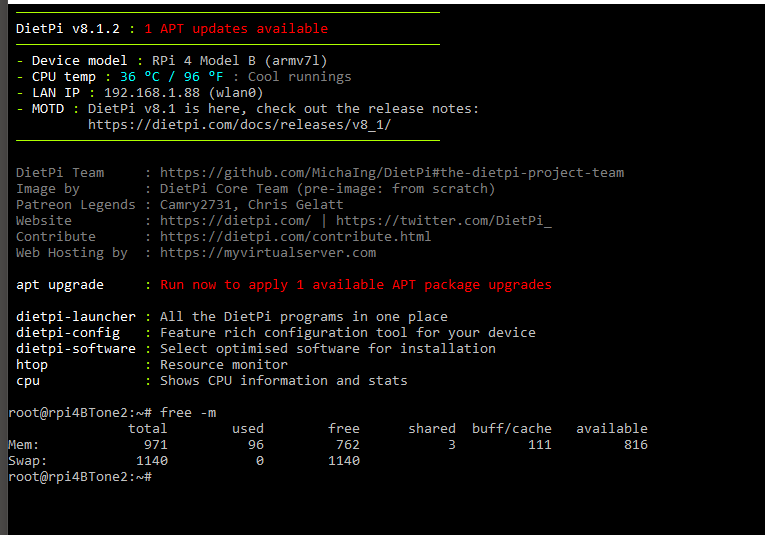 1GB Ram is heaps more than it needs. Diet Pi can add many processes but Ropieee is an effective appliance, unless you run XL option but even then 1GB is more than enough for Ropieee