I searched for this topic but didn’t see this mentioned, so forgive me if this is redundant.

I successfully updated to ROCK when it was released, and I have to say I am pleased. However, I’ve notice one anomaly on my system (which didn’t happen when I used Win10 on this NUC). I’m using ROCK on a supported Intel NUC (5i5) and my music is on a NAS. The only thing of this NUC is ROCK. The one and only issue I have is that when new music is added ROCK/Roon doesn’t notice the change in the folder content on the NAS (QNAP 251). I’ve waited up to 20 minutes with no recognition of new content. Then I go and “force rescan” and everything appears perfectly. No problem. There are no other problems or issues that I can identify and Roon/ROCK work perfectly otherwise. 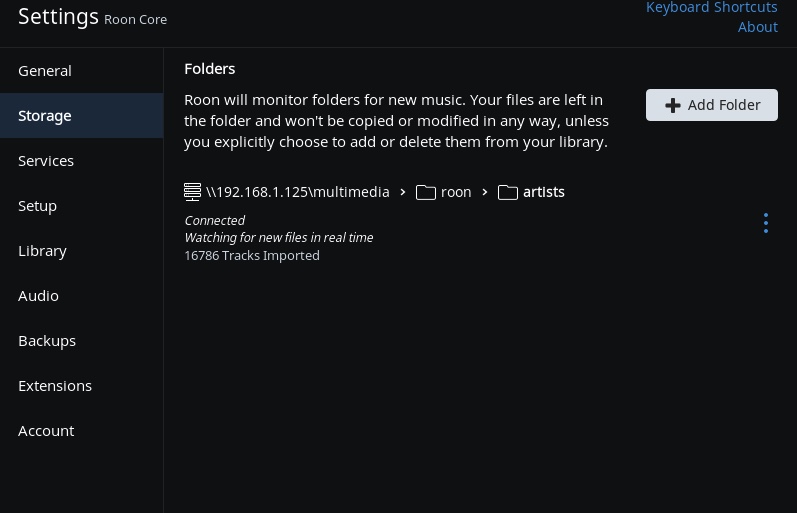 I have the same problem with core on macOS and files on a Synology. Either it doesn’t update at all or only the 1st coupla tracks appear. Have to restart Roon to get it right.

This is a symptom of how real-time file watching works on Windows, vs on Linux or OSX.

Remember that SMB is a Microsoft technology–it’s a first class part of the Windows ecosystem in a way that it isn’t on Linux and OS X. One result is that Windows tends to be a bit better at picking up changes on SMB shares in real time.

We’ve made some improvements to Roon’s filesystem watching behavior over the years, many of which were released with Roon 1.3 a couple of months ago, but ultimately when the operating system fails to deliver file system change notifications to us, there isn’t much we can do, aside from waiting for the Linux and Apple SMB implemnetations to get better, and deploying updates to ROCK as they become available.

Long term, we would like to provide more options for avoiding SMB in NAS-based configurations–perhaps by extending Roon Bridge so that it can run on a NAS and speak a protocol of ours instead of relying on SMB. We don’t have a timeline for that work, but feedback like this is definitely taken into account when we write our schedules.

All of that said, we tend to hear symptoms like these more with other brands of NAS – QNAP and Synology are usually reasonably solid, so you may want to check your SMB settings. It’s possible you can do better here, so feel free to post your settings and we can see if there something obviously wrong here. You can also change the re-scan frequency of your SMB mount in Settings > Storage.

1 Like
New file detection on NAS share
Is adding to Library from Watched Folders Automatic?
Roon is not watching for new files in real time
marshalleq December 1, 2018, 8:40pm #4

Can you clarify what technology exactly Roon utilises from the OS to watch for file system changes? inotify?

Just did a bit of reading. Apparently inotify (assuming that’s what Roon uses) doesn’t work over NFS. I guess I could change to SMB then, I ‘think’ SMB will notify.