I think it would be great if the size of the cover could be maximised on the now playing screen (it’s currently quite small): 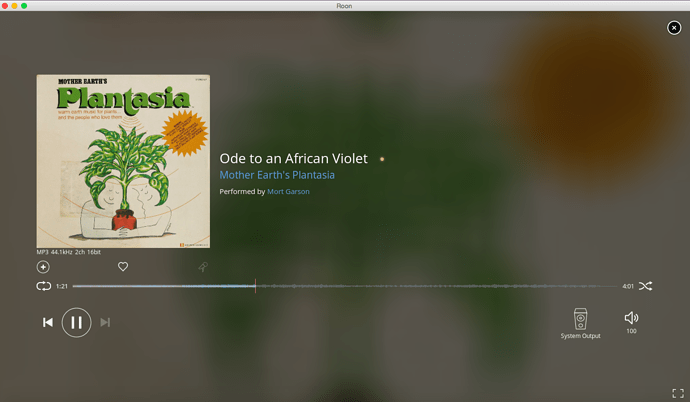 Also, if there is a rear cover available, then show that on the now playing screen too.

I’ve also requested this. I consider the image view that the Sooloos C15 gives to be gold standard here. Visible across the room is ideal so anyone can see what is playing.

I would also love to see the ‘up next’ or even the queue. Potentially you could swipe between them (so different ‘now playing’ modes).

I disagree here though (sorry). If you want to see the queue and what’s next etc then surely you need to be in the queue?

The now playing screensaver type screen should be about exactly that…now playing. There are minimal controls on it for back/next etc. I wouldnt want to see it cluttered with any more than that as it takes away from the cover art.
This is as close as we get to holding the original 12" cover these days

Which is where my ‘swipe between modes’ comes in. Something similar to jremote and ipeng.

I’d like to see the up next (smaller), but not the queue…

This is how the Playlist (Currently playing and Queued) is displayed in the Naim iOS app in both landscape and portrait and with/without track detail. 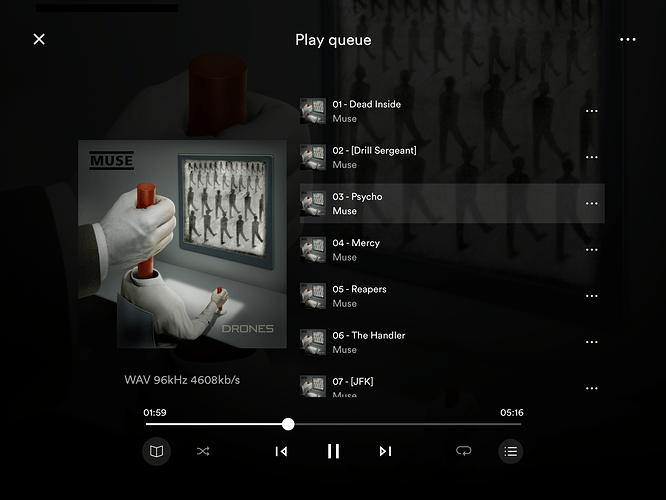 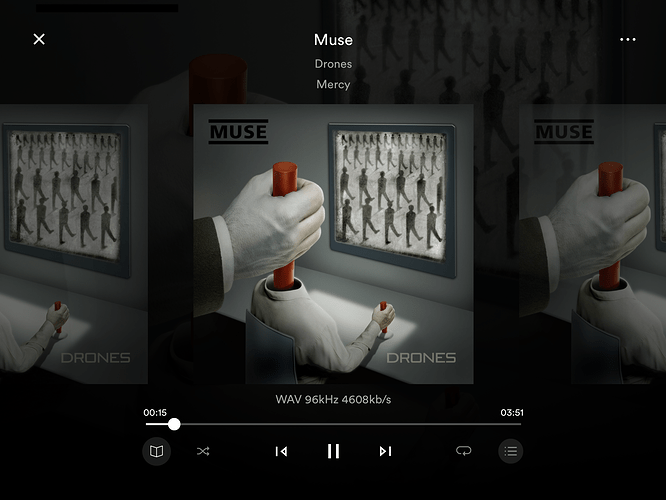 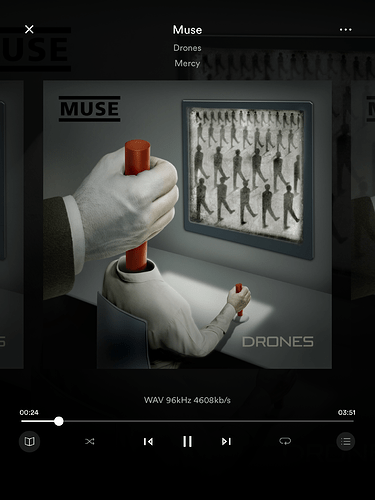 Nice and clean, with controls and format information.

I have some more basic requests.
Why is it black? The black banner on the bottom of the main page is an ugly distraction. Light gray? Or white with a separation line? And smaller, uses too much of the real estate on a tablet?

And if I click on the banner on the bottom, I get to the play page (also black!) but it jumps to the top of the page. This repositioning means you can’t do a smooth transition, like a page unfold.

Using Roon in Windows 8.1 on my monitor it’s dark grey, not black. Quite dark grey, but certainly not black.
For me it’s a reasonable compromise for clarity in varying light conditions, and if you lighten it too much you have the problem of white on grey.

Similarly, the top of page display seems to be a sort of Philips Amberlight type of background where the colour is based on the album image. But perhaps we’re not referring to the same thing.

I’m in the process of redesigning the fullscreen now playing screen. I’ll share some stuff in this thread once I’m further along.

I’m in the camp of the Sooloos “now playing” screen as being a kind of gold standard, fwiw. I’ve gone from my C15 to a 23" touchscreen in my audio room, but cannot read the text nearly as easily from my seat and find the ‘blurred’ background image artistically very mixed, from okay to distracting and meaningless, depending on what the cover image is.
Also, I’d love to be able to set a timer, as with Sooloos, so that I can leave it on playlist but have it switch over to “now playing” screen automatically after X minutes.

Thanks @Brian2. The Sooloos screensaver is awesome. I’ve probably taken it for granted over the years but now I don’t have it I miss it. Simple, eye catching and does exactly what it needs to do.

It’s a nice, clean fullscreen. Don’t change it too much, please

Is this still on the horizon? I find the current screensaver good when I’m using a remote such as an iPad or working at my Mac while using Roon on that machine, but I have also invested in a Touchscreen PC to replace my Control 15 and am looking for a display mode that works across the room. Much the same as that of the Control 15.

I use a MacBook Air to display album art while music is playing. It would be nice to a chrome less album view in the “now playing” screen.

Roon does such a good job of finding great covers for my albums. It would be nice to build the LP cover experience digitally.

The now playing screen is one of my favorite things about Roon’s visual design. I have a large (for a computer) widescreen monitor in my system dedicated to it.

I hope that any changes to the now playing screen will retain its simplicity. If a new view is designed that has a lot more text and/or functionality, I hope that the existing simple view will remain as an accessible option.