I watched one of Rick Beato’s YouTube videos on great songs (a great series of videos). He did Let’s Dance, I did not know Stevie Ray Vaughn played guitar on that, very cool.

So in Roon I went to Bowie and picked Popular songs. Some i expected and some missing. Actually, a lot missing of songs I know.

So with that said, feel free to reply here with your 3 favorite Bowie songs!

Here is that video: 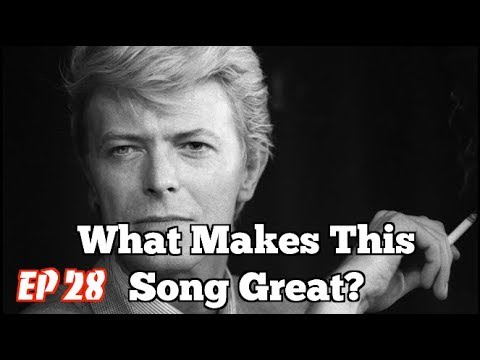 The Thin White Duke is one of the 3 biggest influences in my mainstream musical journey, alongside Queen and Elton John…

Hard to pick three favourites, but I’ll give it a go. I guess I would attach elements other than just the performance. For me, the great tunes are all in the writing as opposed to the actual recording, and as such, my list includes songs made famous by others.

This could be a controversial take on the favourite 3, depending on how one defines what is Bowie. If I had to pick 3 that were pure Bowie in terms of performance then likely:

Thanks for the brain-food

David Bowie gave Lou Reed a new lease of life when he helped to create the classic Transformer album https://thespinoff.co.nz/review/13-01-2016/books-lou-reed-turned-against-everyone-who-tried-to-help-including-david-bowie/

3 that were pure Bowie in terms of performance then likely:

Really great choices! I’d possibly swap ‘Changes’ for ‘Station to Station’, which remains one of the most extraordinary songs of all time.

What’s up with the Popular Songs list in Roon? 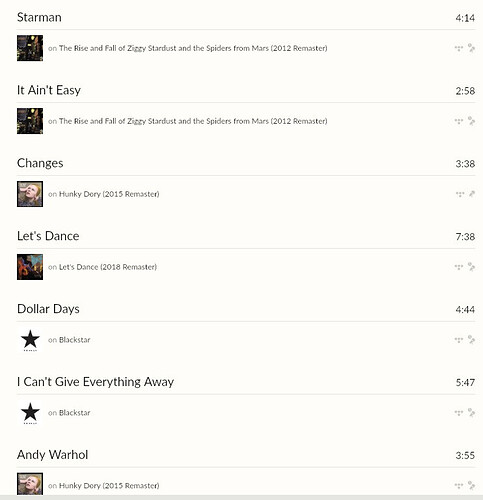 Of course! Hard to leave that one out.

Can’t get my head around ‘It Ain’t Easy’ being popular! That is one strange list.

I strongly suggest that you give a few of Bowie’s live recordings a listen. One thing that is constant throughout all the live recordings, regardless of the year they were recorded, is the always high quality of the band. Playing with Bowie was always an honor and few, if any, musicians turned down the chance.

OT but that series by Rick Beato is well worth a good look. He has just done the 100th. The one he does for Elton John’s Rocketman is stunning. The tune is great but I never cared much for the lyrics…

Impossible to pick just 3 from Bowie. But to get slightly back OT, this video by Tony Visconti is fascinating: 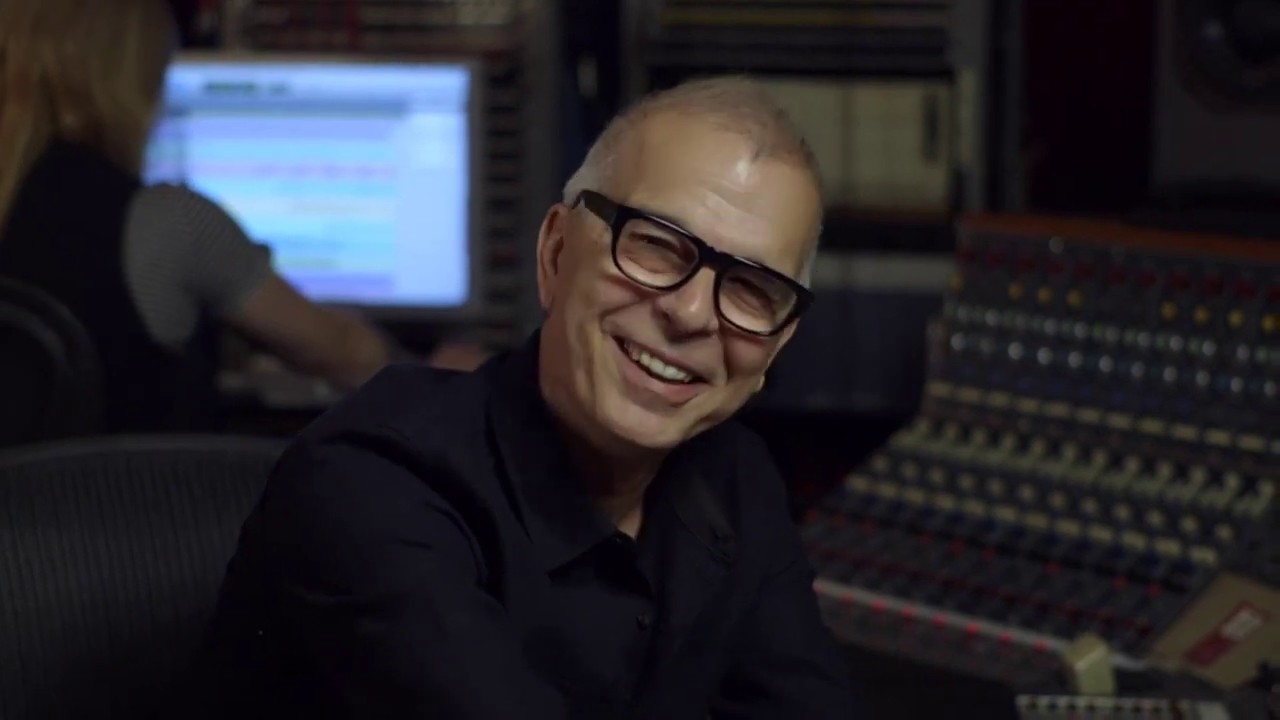 I’d love to offer an argument. I cannot. It isn’t even remotely a bad choice and everyone has their own reasons for what makes a top three.

To be fair, that track is nipping at the heels of Young Americans for me. Good choice, especially as it is from my favourite album of his.

Can’t get my head around ‘It Ain’t Easy’ being popular!

It’s a lesser known track, but in the story and context of arguably Bowie’s greatest album, I can understand why. Before CD, albums were better curated and they had to be to fit on 2 sides of a 12" vinyl LP. They told a story, either as a snapshot of the artist in those few months, or as an abstract musical novel; The Rise and Fall of Ziggy Stardust and the Spiders from Mars was both of those things.

It Ain’t Easy is the bump back to reality that follows the psychedelic, fantasy-laden tracks Moonage Daydream and Starman. What a story that album tells.

Such an amazing catalogue of work. It would not be too hard to pick something from his later years either, but I became a fan as a kid in the formative years of my musical journey, hence the 70s get the nod from me.

It Ain’t Easy was not written by David Bowie, it was written by Ron Davis: Easy

For sure. There are many instances where tracks are not written by the artist, but that doesn’t necessarily fall outside of @RobOK’s loosely defined qualifier for favourite track?

Sometimes an artist picks up someone else’s song and it makes perfect sense in the context of the album it’s released on, whether as part of the snapshot or the story. Sometimes they make a better job of it than the writer/original performer too. I’m thinking of examples along the lines of:

I could probably do a different top 3 every week for Bowie.

You absolutely correct on all counts. I was just pointing it out since Bowie was known for his great song writing as well his great singing and performing.

Too much fun not to have a go:

And Drive in Saturday, and 5 years

Yep - I re-read what I wrote and it seems defensive. I didn’t intend that. Your input made me think of just how many times I’ve encountered tracks that ended-up being stand-outs from the performer on a particular album, but weren’t written by them.

Back in the 60s and 70s, this seemed to happen a lot more; I mean the blurring by swapping/gifting of tracks between an actual singer/songwriter and other performers. Another one springs to mind: Carole King and Gerry Goffin wrote You Make Me Feel Like a Natural Woman for Aretha Franklin’s Lady Soul and the whole album feels like it hinges on this track. Despite it being Carole King’s song, the fact she used it to close Tapestry took real guts; who the hell would want to follow Aretha!?

Maybe I’m getting old, and I’m happy to be guided accordingly, but for the last 30-odd years, there seem to be greater instances of songwriter (ones who do not have a significant performer career) and performer separation as the norm (I’m thinking manufactured pop of the Stock Aitken Waterman variety through to ‘talent’ show type factory output of today) rather than the singer/songwriter to other performer paths more common of yesteryear.

I’ll chime in on this, it’s an interesting debate. I think this isn’t quite as much of a trend as you fear. History is littered with examples of Hit Makers. Goffin and King operated out of the Brill building. Motown are another good example as are the Jamaican studios of the late 60s and 70s. The money’s always been in writing and publishing

So you’re saying I’m getting old then?

Point well made and appropriately acknowledged. I had forgotten about the model of Motown etc (see above point on getting old).

One of the first albums I bought as a new teen was Ziggy Stardust which had a very lasting and deep impression on me.

Plenty more obviously but I just love the Ziggy album to this day!