I have a feature request not for the Roon software itself but for the release notes.

I had an issue with 1.6 because there was a major update to how Android works and now my DAP no longer works with Roon. I didn’t know that before I updated and only found out once it stopped working and spent more time on this forum than was really necessary. To be honest, Roon’s release notice policy doesn’t really help.

As it is, on my laptop I see a notification that updates are available. There is no warning that there that there have been major changes that are not backwards compatible. A minor update that fixes a syncing issue looks the same as a major rewrite at this point.

From there, there’s a link to get more info. If I click on that, on my laptop, I get the About page that indeed shows some more info. But not about breaking things. Again, the same for a minor fix as a major release that breaks backwards compatibility.

Finally, after a few more clicks, I can get to the actual release notes on the support site. While the information is found there, the information architecture for the release notes puts all information at the same level, from how paths are displayed to bricking devices. Basically, a note for a syncing issue looks the same as breaking someone’s stack. If I want to be sure I don’t miss something I have to read the whole document, and they can be long, in order to determine if there’s something disconcerting in the release.

I’d recommend placing a warning in that very first message alerting us to updates. If it’s a breaking update, put a warning icon in there with a message to check the release notes as things may, knowingly, break. Doesn’t have to go into detail. That’s in the release notes and a heads up is probably enough at that level.

On top of that, or at the very least, maybe call out changes, like updates to Android so that all version less than 5.0 will no longer work, in a special section or with a distinctly different visual style so that a person can just quickly scan the notes for anything they may need to worry about. 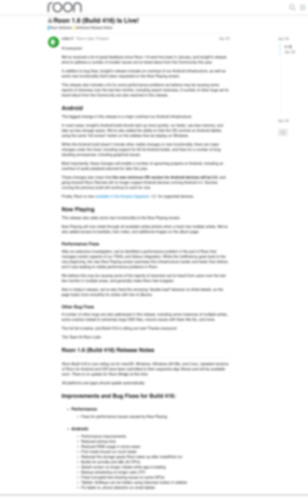 If something is no longer working with Roon then either:

So android was never technically supported before? Funny how that detail didn’t get pushed to the front of any buying decisions.

Android is supported. If an Android device is no longer working, open a Support thread to get it fixed.

Not for unsupported devices, no.

I’m talking about the change to OpenGL 3.0.

OpenGL 3.0 has always been specified as a requirement. If you have a device that uses it but is no longer working, then open a Support thread. If you are talking about a device that does not have OpenGL 3.0 then it was never supported.

Interesting. So even though they only just moved to OpenGL 3.0 in 1.6, no other version was ever supported?

Look. Say all you want. All my request was, was to use a different color or icon in the release notes when something breaks. 1.6 did that. Knowingly. If adding a color is too tough, that says a lot about Roon.

But it did work …

3.0 may have always been required but until 1.7 my 2 Samsung TAb A tablets still worked. Now with the Open GL change they won’t even update

Admittedly when trying in the Play Store I was told that the update was not compatible with my device , I gleaned why from the release notes and a little app that identifies the Open GL version

It didn’t break anything it just didn’t load. So both these devices will no longer run Roon Remote

I use the tablets as my one size fits all device , phone ebook reader, tablet but alas no longer my Roon Remote , back to my ageing iPad …

OpenGL 3.0 has been a published minimum requirement to run Roon since April 2015. This requirement was neither introduced nor changed in 1.6 or 1.7.

Expecting Roon to test for devices that don’t meet published minimum requirements and then give special warnings about them is unrealistic.

Edit: I was mistaken about this. Roon 1.7 introduced a new requirement for mobile devices to have OpenGL 3.0 ES. See below.

It absolutely changed in how they handled it and they could just have easily alerted us as we are typing these comments.

Simple users may not even know what Open GL is , it certainly wasn’t on my horizon when I looked for a tablet

A tablet is a tablet😴

“A tablet is a tablet”

Amen. And that’s how you do user experience.

Expecting Roon to test for devices that don’t meet published minimum requirements and then give special warnings about them is unrealistic.

Not at all what I suggested.

Actually, I have to apologise. Although OpenGL 3.0 has always been required for desktops, OpenGL 3.0 ES was a new requirement in 1.7 for mobile devices.

A request for greater visibility of such changes is fair. But the outcome of not upgrading is not a supported fork of Roon. Keeping an old version will eventually run into database incompatibilities.

A request for greater visibility of such changes is fair.

Yes, that’s all I was asking for. The very fact Roon had to make a post about the update to address a number of questions that were coming in, the 1.7 post you link to, I’d say the information is not as widely known or understood as Roon would hope. There’s a reason why documentation alone isn’t a best practice for disseminating important information like that.

I’d like to add that since there is no “undo” to upgrades, sometimes it mignt be advantageous to delay an upgrade for practical reasons while solving whatever incompatibility arises. I agree with making the release notes more clear about what may no longer work, especially if it means new hardware must be purchased (which takes at least a nominal amount of time to complete).

So I wasn’t left high and dry, I could quite easily have been left so