This is the release that sees the return of XL: a complete rebuild of XL functionality based upon the new architecture.

So for all XL users: you need to reflash because this new version is not compatible with the previous one. And yes, the ‘old’ version keeps on working, so no need to rush

Are there things that are fundamentally different compared with the old XL? Yes, in one area: bluetooth support is gone. There’s a story here, but the summary is quite simple: it was a real pain to support bluetooth and although I can endure some pain: this was too much.

So sorry for those users that use this functionality, but doing stuff in free time needs at least to be fun

For the rest it’s various stuff all over the place: from auto-update functionality to another round of UI (touchscreen) refinements.

And for images you obviously need to go to the website: https://ropieee.org

And the beta users can just switch to stable updatechannel?

Just updated my two rpi4 and everything is working fine, wonderful job!

Installed the new XL.
It isn’t finding my wireless network. When I tell it to scan for wireless networks, it just spins and doesn’t find anything.
Everything else seems to work.

Edit: rebooted several times and it started to work.

@spockfish, are you planning possibility to switch to the XL version from the standard version directly in the next releases? My RPi’s are tucked away and I wonder if I have to dig them out to add Airplay

I can confirm the ntp related dns queries dropped to once an hour. Nice!

Hi Harry. I seem to remember you mentioning in another thread that there would be the option to change the librespot and shairport names to anything we wanted to. I used to do this via SSH but obviously can’t do that anymore.

The librespot/shairport implementation has also regressed a bit from the old version in that all devices are now called “ropieeexl [RoPieeeXL]” in Airplay and Spotify, which means in a house with multiple RoPieees I’ve no idea which is which - all I see is 4 devices with the same name.

Is it possible to expose this via the web interface so we can call them what we want?

The librespot/shairport implementation has also regressed a bit from the old version in that all devices are now called “ropieeexl [RoPieeeXL]” in Airplay and Spotify,

That’s not what I see. Keep in mind that the first part is the hostname, so the default is ‘ropieeexl’. If you give the unit a different hostname the service name will be adjusted accordingly.

But in general: exposing this in the interface to change it to your likings is on the list and relatively high up as well. So I expect this to land soon-ish.

You can see my three devices on the old version (Roon 1, Roon 2 and Roon Study) all have the specific name - the fourth one with the generic name is the new version. 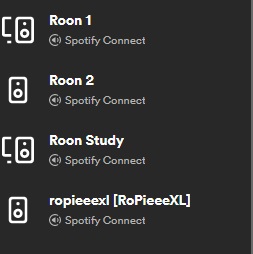 And you’re right: this is not what I expected to see

I’ll look into this.

PS: just to be sure: you changed hostname, ran configure and rebooted?

I already identified the issue.
You can ‘solve’ it for now by doing it in 2 steps: set your hostname (or you already did this), configure, reboot (with the new hostname) and trigger another configure step by changing something in the configuration (not the hostname I suggest

). The new configure you kick off will change the service name this time.

This will solve it for now (I assume you don’t change hostnames that often). I’ll fix it in the next version.

Thanks Harry - confirmed this has worked and I now have the correct name in both Airplay and Spotify.

I just created my own “bug” doh!

I installed XL as I wanted use NAA. It kept saying to run “Configure” but Configure never showed. I just rebooted. Bridge was working but NAA was not

But then I noticed hostname wasn’t changed. hmmmm

And I also remembered I’ve not seen an upgrade notice in a long time. And feedback wasn’t working.

So, I started digging into the browser debugger. DOH! Moment. The machine I was using is on a different subnet and firewall only allows port 80 / 443 connections to the network Ropieee is on. This prevents the notification banners fro working.

Might want to put a note in the docs that you need to be on the same subnet to configure these things or, at least, don’t firewall yourself from configuration

Anyway, gave myself a good laugh once I figured it out. Nothing like self-inflected problems. Oh, and NAA is working good now. Thanks!

I am having problems with the volume control when using the shairport endpoint. It appears to be only using software despite being set to hardware. As a result the max volume for shairport is dependent on what the volume is set to for the Roon device which does appear to be using the hardware volume control.

This will be fixed in the next release, scheduled for this month.

I’d like to begin by saying that I really appreciate the work done to make ropieee possible. I recently updated both of my devices from the last old linux release to 2022.04 by flashing the memory cards. Now when I go to boot them they take forever to come up and it is due to an NTP sync failure where it then tries HTTPS. I did not have this issue before and my network has remained unchanged. I see in the release notes there was a change with NTP. Am I missing something I need to do or is there a bug? Thank you!

Am I missing something I need to do or is there a bug? Thank you!

You’re not missing something and there is (afaik) no bug in this part.

What could have changed however are things on your end: NTP is sometimes blocked by ISPs (stupid), or that your own firewall prevents it.

It does not bring any real problems (as the fallback scenario is that time is synced over HTTPS), but it’s not ideal.